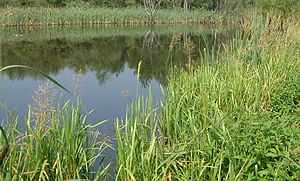 The Ramsar Convention (formally, the Convention on Wetlands of International Importance, especially as Waterfowl Habitat) is an international treaty for the conservation and sustainable utilization of wetlands,[1] recognizing the fundamental ecological functions of wetlands and their economic, cultural, scientific, and recreational value. It is named after the city of Ramsar in Iran, where the Convention was signed in 1971.

The convention was developed and adopted by participating nations at a meeting in Ramsar, Mazandaran, Iran, on February 2, 1971, hosted by the Iranian Department of Environment, and came into force on December 21, 1975.

The Ramsar List of Wetlands of International Importance now includes 2208 Sites (known as Ramsar Sites) covering over 210,734,269.41 ha (520,735,720.3 acres). The country with the highest number of Sites is the United Kingdom at 170 and the country with the greatest area of listed wetlands is Bolivia, with over 140,000 km2 (54,000 sq mi).[2] The Ramsar definition of wetlands is fairly wide, including "areas of marine water the depth of which at low tide does not exceed six meters" as well as fish ponds, rice paddies and salt pans.[3]

Presently there are 169 contracting parties, up from 21 initial signatory nations in 1971. The state parties meet every three years as the Conference of the Contracting Parties (COP), the first held in Cagliari, Italy in 1980. Amendments to the original convention have been agreed to in Paris (in 1982) and Regina (in 1987).[4]

There is a standing committee, a scientific review panel, and a secretariat. The headquarters is located in Gland, Switzerland, shared with the IUCN.

The Ramsar Convention works closely with five other organisations known as International Organization Partners (IOPs). These are Birdlife International, the International Union for Conservation of Nature (IUCN), the International Water Management Institute (IWMI), Wetlands International and WWF International. These support the work of the Convention by providing expert technical advice, helping implement field studies and providing financial support. The IOPs also participate regularly as observers in all meetings of the Conference of the Parties and as full members of the Scientific and Technical Review Panel. For example, at the 2008 Convention of Parties, IWMI scientists contributed directly to a number of resolutions including those relating to wetlands' links to human health, biofuels, poverty reduction, biogeographic regionalization and biodiversity in rice paddies.