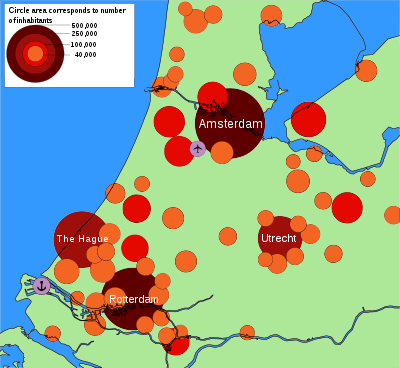 The Randstad (Dutch pronunciation: [ˈrɑntstɑt]) is a megalopolis in the Netherlands. It consists of the four largest Dutch cities (Amsterdam, Rotterdam, The Hague and Utrecht) and the surrounding areas. With a population of 7,100,000 it is one of the largest metropolitan regions in Europe,[b] comparable in size to Milan or the San Francisco Bay Area, and covers an area of approximately 8,287 km².[a]

The name Randstad means edge or border city. It is an industrial and metropolitan region occupying an area of peat and clay lowlands in west-central Netherlands. Randstad consists of major Dutch industrial cities extending in a crescent (open to the south-east) from Utrecht in the east to Dordrecht in the south and to Lelystad in the north. Randstad is one of the most important economic and densely populated areas in the northwest of Europe. The regions form a ring of four large urban agglomerations (Amsterdam, Rotterdam, The Hague and Utrecht), as well as a number of medium-sized and smaller towns, such Almere, Delft, Leiden and Haarlem. These closely linked agglomerations are situated around the green heart of Holland; a green area, which provides the region not only healthy fresh air, but also room for agricultural activity and for rest and recreation. This combination of space for business activity, residential areas and recreation makes Randstad Region an attractive region both in which to live and to locate businesses.[citation needed]

The Randstad has a history of competition. For instance, Rotterdam and Amsterdam, the two main cities, compete in many ways, from football to art. Lately, the cultural sector has tried to limit this rivalry and look for mutual strength. Major cultural organisations in Amsterdam, such as the Concertgebouw and Holland Festival, have joined forces with similar organisations in Rotterdam via A'R'dam. In 2007, these organisations published a manifesto with plans for co-operation. One of the goals is to strengthen the international position of culture and art in the Netherlands in the international context.

Recently, Dutch planners have started to refer to the Randstad as Deltametropool.[3] Deltametropolis actually consists of two large metropolitan areas:

1. The Noordvleugel (North Wing, with a population of around 3.6 million people), consisting of the Haarlem and IJmuiden conurbations in the west, Amsterdam at the centre and Almere, the Gooi area and Utrecht in the east. The conurbation of Utrecht (pop. around 1 million) can be considered to be part of this wing, but can also be excluded. The cultural centre of the Noordvleugel, however, is notably centered on Amsterdam, which could – as such – be considered a classical centralistic metropolis. Amsterdam recently started to present itself as the Amsterdam Metropolitan Area (Metropoolregio Amsterdam). The expectation is that the use of the Noordvleugel and the Randstad will become less as a result.[4] This part of the Randstad is expected to grow more in population than the Zuidvleugel and the Groene Hart/Green Heart areas, with the growth of population also being in effect for a longer period of time, compared to the other two areas.[5]

2. The Zuidvleugel (South Wing, with a population of around 3.5 million people), stretching some 60 kilometers from Dordrecht in the South East to Leiden in the North. The main conurbations are the Rotterdam and The Hague areas. The virtual centre of the Zuidvleugel lies in between these two major cities, near Delft. The first steps toward this development are currently being taken with the construction of a new fast light-rail connection between Rotterdam and The Hague: RandstadRail. A long-delayed extension of the western A4-motorway from the south of Delft to Rotterdam has also been put back on the administrative agenda, creating a second connection between Rotterdam, via The Hague, to Amsterdam.

A possible new area would be the Zuidoostflank; parallel to the A2 motorway (from Amsterdam to Eindhoven) and parallel to the A12 motorway (Utrecht to WERV (Wageningen, Ede, Rhenen and Veenendaal)), as this region has much potential to strengthen the knowledge economy of the Randstad.[6] 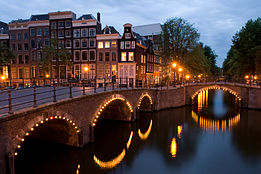 Over the last few decades, a major topic in the Randstad is the conflict between the cities and the towns in between. These towns and the surrounding countryside, known as the Groene Hart (Green Heart), are usually much greener than the cities, they house many commuters that work in the cities and the former strongly depend on the latter for facilities such as hospitals and large scale entertainment. Cities need more space to expand, yet the towns fear losing their identity and autonomy.

An issue regarding the Randstad is the question of its borders. The Randstad's borders have never been officially specified. Some consider only the four biggest cities of the Netherlands (Amsterdam, Rotterdam, The Hague and Utrecht) part of it, others would say that areas such as Alkmaar (which represents itself as being part of it),[7][8][9] Hoorn and Lelystad are also part of this conurbation. The publication "Randstad 2040", released by the Dutch government, reveals that the Noordvleugel (North Wing, Amsterdam and Utrecht region) is already growing parallel to the A1, A2, and A4 motorways, as well as into the northern part of North Holland (Alkmaar region) and Flevoland (Lelystad region).[10] There is also a trend shown that the Noordvleugel is expanding parallel to the A2 (Amsterdam towards Eindhoven) and A12 (Utrecht towards the WERV (Wageningen-Ede-Rhenen-Veenendaal)) motorways. This region is called the 'Zuidoostflank' (Southeastside).[6]

Randstad is one of co-location centres of Knowledge and Innovation Community (Climate Change Mitigation and Adaptation) of The European Institute of Innovation and Technology (EIT).[11]

The Governing Board of the European Institute of Innovation and Technology (EIT) met on 16 December in Budapest to designate the first three Knowledge and Innovation Communities (KICs).

The Randstad possesses a large infrastructure system, with many railways, motorways, trams and subways in various cities. It is possible to cycle on reasonably safe and pleasant routes almost everywhere and cycling is a major mode of transport. The port of Rotterdam, and Schiphol airport, are both major international gateways. There are various smaller ports and airports in the Randstad, like the ports of IJmuiden, Amsterdam and Dordrecht, as well as Rotterdam-The Hague Airport.

The Randstad has various motorways, most of them starting around Amsterdam and Rotterdam. Many international corridors start in the Randstad, including the A1, A2, A4, A7, A12, A15, A16 and A20 motorways, as well as various commuter routes.

The Randstad network of motorways carry some of the highest traffic volumes in Europe. Until about 10 years ago most motorways used to be no wider than 2x2 or 2x3 lanes, but in recent years capacity of most major highways has been expanded to six or eight and on some parts even ten lanes. A 14-lane highway is projected near Utrecht. Some hard shoulders are in use as peak hour lanes – traffic is allowed to use the hard shoulder as a third or fourth lane during periods of congestion, when traffic management signs indicate. Since these expansions traffic jams (which used to be quite intense) have been reduced by up to 25%. Traffic on the highway still is quite heavy, though.

Because of the many obstructions in minor roads, such as one-way or circular routes (often created to make living neighbourhoods safer), a lot of local traffic also uses the motorways. There are a few missing links in the motorway network of the Randstad, especially on the A4 motorway, where construction has been a topic of debate since the 1960s. This results in quite heavy traffic on the alternative A13 highway between Rotterdam and the Hague.

Another growing issue is the number of trucks on the radiating motorways from the Randstad; truck volumes can be as high as 20,000 trucks per day, occupying the entire right lane on some motorways.

The Randstad is the keystone of the Dutch railway network; most intercity connections terminate in one of the key cities in the Randstad. The railway network in the area is dense and heavily used. Delays used to be common. Together with the Swiss Federal Railways (#1), and the Belgian railways (#3), the Dutch Railways are in the top 3 of Europe in punctuality.[15][16] Larger cities in the Randstad have many railway stations, as well as light rail, subway and/or tram networks.

Much effort is being expended in increasing the cycling rate of the Randstad. The campaign Fietsfilevrij exists to encourage cycling as an alternative to waiting in traffic jams on the motorway. Bicycle superhighways have been built on which cyclists have priority for long distance, high speed cycle commuting. For instance, one of these stretches the 50 km distance between Amsterdam and Utrecht.