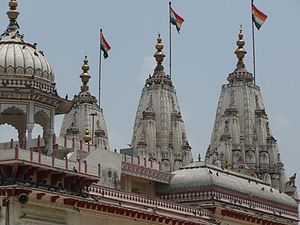 Jainism emphasises that ratnatraya (triple gems of Jainism) — the right vision or view (Samyak Darshana), right knowledge (Samyak Gyana) and right conduct (Samyak Charitra) — constitutes the path to liberation. These are known as the triple gems (or jewels) of Jainism and hence also known as Ratnatraya. These three are essential for the soul to move up spiritually.[1] 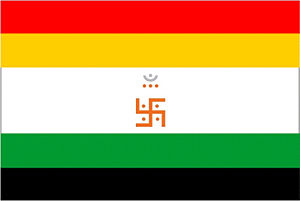 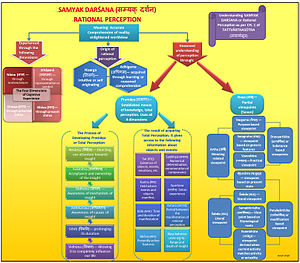 Limited area of activity vow (so as to minimize unavoidable violence as consequence of activity)
Limited use of consumable and non-consumable items vow
Avoidance of purposeless activities (without any reason or benefit) vow
Meditation for limited duration (for example, every day for few minutes)
Practice of ascetic life for limited duration (for example, once a day in a year)
Constraining normal activities (in other dimensions in addition to limited area)
Charitable work or contributions to the extent feasible

It is impossible for a newborn baby to have the knowledge, skills and capability of a brain surgeon. However, the child can go through a series of educational steps starting from the kindergarten and applying himself / herself to become an expert in its chosen field. Similarly, Jainism acknowledges that the soul advances to its liberated stage in various steps, called Gunasthan. Jain literature describes these states in detail. The following provides a concise summary on the various statuses of soul on its journey to spiritual advancement.

Awakening - Developing right view
1.Lowest stage with ignorance, delusion, and with intense attachments and aversions. This is the normal condition of all souls involved in the samsara, and is the starting point of spiritual evolution.
2.Indifference to reality with occasional vague memory of spiritual insight.
3.Fleeting moments of curiosity towards understanding reality.
4.Awareness of reality with trust developed in the right view, combined with willingness to practice self-discipline. The soul may be able to subdue the four passions, namely anger, pride, deceit and greed.[5]

Developing right view and discipline
5. The soul now begins to observe some of the rules of right conduct with a view to perfecting itself. With the discipline of introductory or minor vows, the soul starts on the process of climbing the spiritual ladder.
6. Major vows taken up with firm resolve to control passions. There may be failures due to lack of full control over passions or carelessness.

Developing self discipline and knowledge
7. Intense practice of vows assisted in better self-control and virtually replaced carelessness with spiritual vigilance and vigor.
8. Closer to perfect self-control over actions, higher control over mind, thought and passions with the soul ready for reduction of the effects of conduct-deluding karma.
9. Higher control over removal of passions, and elimination of conduct-deluding karma begins.
10. Complete elimination of all passions except for subtle degree of attachment.

Gaining absolute knowledge and bliss
11. Suppressed passions and lingering conduct-deluding karma may rise to drag the soul to lower stages; fleeting experiences of equanimity.
12. This is the point of no return. All passions as well as conduct-deluding karma are eliminated. Permanent internal peace achieved. No new bondage from this point onwards.
13. All Ghatiya karma eliminated. Omniscience achieved and Arihant stage reached. However the perfected soul is still trapped in the physical body (with right knowledge attained).
14 Siddha stage reached. Purest soul associated with no physical body.