From Infogalactic: the planetary knowledge core
(Redirected from Reboot (continuity))
Jump to: navigation, search
For other uses, see Reboot (disambiguation). 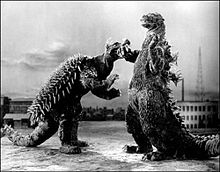 In serial fiction, to reboot means to discard all continuity in an established series in order to recreate its characters, timeline and backstory from the beginning.[1][2] The term is used with respect to various different forms of fictional media such as comic books, television series, video games, and films among others.[1]

The term is thought to originate from the computer term for restarting a computer system.[2]

Reboots remove any non-essential elements associated with a franchise by starting the franchise's continuity over and distilling it down to the core elements and concepts.[3] For consumers, reboots allow easier entry for newcomers unfamiliar with earlier titles in a series.[3]

With reboots, filmmakers revamp and reinvigorate a film series in order to attract new fans and stimulate revenue.[2] A reboot can renew interest in a series that has grown stale, and can be met with positive, mixed, or negative results by both the consumers and film critics.[4] Reboots also act as a safe project for a studio, as a reboot with an established fan base is less risky (in terms of expected profit) than an entirely original work, while at the same time allowing the studio to explore new demographics.[5] Reboots also allow directors and producers to cast a new set of younger actors for the familiar roles of a film series in order to attract a younger audience.[citation needed]

A subtype of the reboot has arisen in the form of the 'soft reboot' which, while establishing a new storyline, remains faithful to the style and conventions of the original work and/or preserves the original continuity,[citation needed] either by placing its new storyline within the existing continuity but chronologically outside of the original storyline (for example, the Star Wars sequel trilogy) or, in a few cases, by using time travel storylines to create an alternate history continuity (for example, the X-Men prequel trilogy).[citation needed] A soft-rebooted narrative can be watched in isolation without the need to view the preceding works, but also allows the preceding works to provide a greater understanding of the surrounding context.[citation needed]

Reboots are common in the video game industry, particularly with franchises that have multiple entries in the series.[3] Reboots in video games are used to refresh the storyline and elements of the game.[3]

In comics, a long-running title may have its continuity erased to in order start over from the beginning, enabling writers to redefine characters and open up new story opportunities, and allowing the title to bring in new readers.[1][6] Comic books sometimes use an in-universe explanation for a reboot, such as merging parallel worlds and timelines together or destroying and recreating a fictional universe from the beginning.[7][8][9]