From Infogalactic: the planetary knowledge core
Jump to: navigation, search
This article is about military reconnaissance. For other uses of reconnaissance, see Reconnaissance (disambiguation). For monitoring activity, see surveillance.

Reconnaissance is a mission to obtain information by visual observation or other detection methods, about the activities and resources of an enemy or potential enemy, or about the meteorologic, hydrographic, or geographic characteristics of a particular area.[1]

In military operations, reconnaissance is the exploration outside an area occupied by friendly forces to gain information about natural features and enemy presence.

Examples of reconnaissance include patrolling by troops (Long Range Reconnaissance Patrol, U.S. Army Rangers, scouts, or military intelligence specialists), ships or submarines, manned/unmanned reconnaissance aircraft, satellites, or by setting up covert observation posts. Espionage normally is not reconnaissance, because reconnaissance is a military's special forces operating ahead of its main forces; spies are non-combatants operating behind enemy lines.

Tatar horsemen in the painting “On Reconnaissance” by Józef Brandt, 1876.

Traditionally, reconnaissance was a role that was adopted by the cavalry. Speed was key in these maneuvers, thus infantry was ill suited to the task. From horses to vehicles, for warriors throughout history, commanders procured their ability to have speed and mobility, to mount and dismount, during maneuver warfare. Military commanders favored specialized small units for speed and mobility, to gain valuable information about the terrain and enemy before sending the main (or majority) troops into the area, screening, covering force, pursuit and exploitation roles. Skirmishing is a traditional skill of reconnaissance, as well as harassment of the enemy. 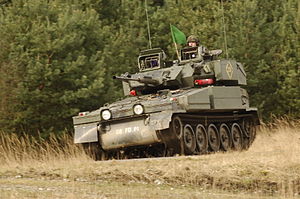 A Scimitar as used by armoured reconnaissance regiments of the British Army. 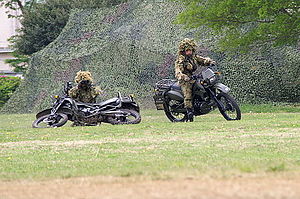 Aerial reconnaissance is reconnaissance carried out by aircraft (of all types including balloons and unmanned aircraft). The purpose is to survey weather conditions, map terrain, and may include military purposes such as observing tangible structures, particular areas, and movement of enemy forces.

The techniques and objectives are not mutually exclusive; it is up to the commander whether they are carried out separately or by the same unit.

Some military elements tasked with reconnaissance are armed only for self-defense, and rely on stealth to gather information. Others are well-enough armed to also deny information to the enemy by destroying their reconnaissance elements.

Reconnaissance-in-force (RIF) is a type of military operation or military tactics used specifically to probe an enemy's disposition. By mounting an offensive with considerable (but not decisive) force, the commander hopes to elicit a strong reaction by the enemy that reveals its own strength, deployment, and other tactical data. The RIF commander retains the option to fall back with the data or expand the conflict into a full engagement.

Other methods consist of hit-and-run tactics using rapid mobility, and in some cases light-armored vehicles for added fire superiority, as the need arises.

Reconnaissance by fire (or speculative fire) is the act of firing at likely enemy positions, in order to cause the enemy force to reveal their location by moving or by returning fire.[2]

Reconnaissance-pull is a tactic that is applied at the regiment to division level and defined as locating and rapidly exploiting enemy weaknesses. It is the ability to determine enemy positions and create exploitable gaps through which friendly forces can pass while avoiding obstacles and strong points.[3]

A textbook example of reconnaissance-pull was documented during the Tinian landings during World War II, utilized by the United States Marine Corps's Amphibious Reconnaissance Battalion, from V Amphibious Corps. Aerial photography, and the confirmation by the amphibious reconnaissance platoons determined that the Japanese defenders had largely ignored the northern beaches of the island focusing most of their defensive effort on beaches in the south-west which were more favorable for an amphibious landing. American forces quickly changed their landing location to the northern beaches and planned a small and hasty "deception" operation off the southern beach, which resulted in a complete surprise for the Japanese forces. As a result, American forces were able to fight the Japanese force on land where they had the advantage leading to light losses and a relatively short battle that lasted only 9 days.[4]

When referring to reconnaissance, a commander's full intention is to have a vivid picture of his battlespace. The commander organizes the reconnaissance platoon based on:[citation needed]

This analysis determines whether the platoon uses single or multiple elements to conduct the reconnaissance, whether it pertains to area, zone, or route reconnaissance, the following techniques may be used as long as the fundamentals of reconnaissance are applied.

Scouts may also have different tasks to perform for their commanders of higher echelons, for example: the engineer reconnaissance detachments will try to identify difficult terrain in the path of their formation, and attempt to reduce the time it takes to transit the terrain using specialist engineering equipment such as a pontoon bridge for crossing water obstacles. Sanitary epidemiological reconnaissance implies collection and transfer of all data available on sanitary and epidemiological situation of the area of possible deployment and action of armed forces, the same data for the neighboring and enemy armed forces. The aim for the reconnaissance is to clear up the reasons of the specific disease origin- sources of the infection in various extreme situations, including local wars and armed conflicts, the ways of the infection transfer and all factors promoting to the infestation. 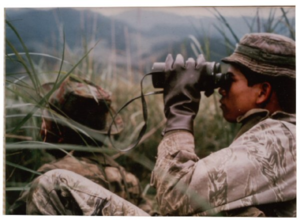 Area reconnaissance refers to the observation, and information obtained, about a specified location and the area around it; it may be terrain-oriented and/or force-oriented. Ideally, a reconnaissance platoon, or team, would use surveillance or vantage (static) points around the objective to observe, and the surrounding area. This methodology focuses mainly prior to moving forces into or near a specified area; the military commander may utilize his reconnaissance assets to conduct an area reconnaissance to avoid being surprised by unsuitable terrain conditions, or most importantly, unexpected enemy forces. The area could be a town, ridge-line, woods, or another feature that friendly forces intend to occupy, pass through, or avoid.[1]

Civil Reconnaissance is the process of gathering a broad spectrum of civil information about a specific population in support of military operations. It is related to and often performed in conjunction with infrastructure reconnaissance (assessment and survey). Normally the focus of collection in the operational area for civil reconnaissance is collecting civil information relating to the daily interaction between civilians and military forces. Civil information encompasses relational, temporal, geospatial and behavioral information captured in a socio-cultural backdrop. It is information developed from data related to civil areas, structures, capabilities, organizations, people, and events, within the civil component of the commander’s operational environment that can be processed to increase situational awareness and understanding. The type of civil information that is needed in order to support military operations varies based on the environment and situation.[7][8] 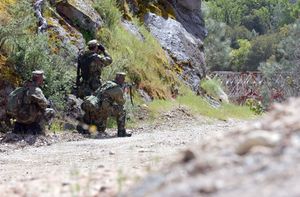 U.S. Seabee Engineer Reconnaissance Team on a mission to determine if a bridge can be used to support troop and convoy movements

Route reconnaissance is oriented on a given route: e.g. a road, a railway, a waterway; a narrow axis or a general direction of attack, to provide information on route conditions or activities along the route. A military commander relies on information about locations along his determined route: which those that would provide best cover and concealment; bridge by construction type, dimensions, and classification; or for landing zones or pickup zones, if the need arises.[1]

In many cases, the commander may act upon a force-oriented route reconnaissance by which the enemy could influence movement along that route. For the reconnaissance platoons, or squads, stealth and speed—in conjunction with detailed intelligence-reporting—are most important and crucial. The reconnaissance platoon must remain far enough ahead of the maneuver force to assist in early warning and to prevent the force from becoming surprised.

Even it is paramount to obtain information about the available space in which a force can maneuver without being forced to bunch up due to obstacles. Terrain-oriented route reconnaissance allows the commander to obtain information and capabilities about the adjacent terrain for maneuvering his forces, to include, any obstacles (minefields, barriers, steep ravines, marshy areas, or chemical, biological, radiological, and nuclear contamination) that may obstruct vehicle movement—on routes to, and in, his assigned area of operations. This requirement includes the size of trees and the density of forests due to their effects on vehicle movement. Route reconnaissance also allows the observation for fields of fire along the route and adjacent terrain. This information assists planners as a supplement to map information.

Zone reconnaissance focuses on obtaining detailed information before maneuvering their forces through particular, designated locations. It can be terrain-oriented, force-oriented, or both, as it acquire this information by reconnoitering within—and by maintaining surveillance over—routes, obstacles (to include nuclear-radiological, biological, and chemical contamination), and resources within an assigned location.[4]

Also, force-oriented zone reconnaissance is assigned to gain detailed information about enemy forces within the zone, or when the enemy situation is vague by which the information concerning cross-country traffic-ability is desired.[1] The reconnaissance provides the commander with a detailed picture of how the enemy has occupied the zone, enabling him to choose the appropriate course-of-action.

As the platoon conducts this type of zone reconnaissance, its emphasis is on determining the enemy's locations, strengths, and weaknesses. This is the most thorough and complete reconnaissance mission and therefore is very time-intensive.