Recruit Training Command Great Lakes (RTC Great Lakes), is a unit within the United States Navy primarily responsible for conducting the initial orientation and indoctrination of incoming recruits. It commonly is referred to as boot camp, recruit training, or RTC. Since the BRAC-directed closures of Recruit Training Commands in Orlando, Florida and San Diego, California in 1999, RTC Great Lakes has been the only enlisted basic training location in the U.S. Navy and has been called "The Quarterdeck of the Navy" since it was first utilized in July 1911.

Running at approximately eight weeks long, all enlistees into the U.S. Navy commence their enlistments at this command. Upon successful completion of basic training, qualifying sailors are sent to various apprenticeship, or "A schools", located across the United States for training in their occupational speciality, or ratings. Those who have not yet received a specific rating, enter the fleet with a general designation of airman, fireman, or seaman. Recruit Training Command is located at Naval Station Great Lakes in the city of North Chicago, Illinois in Lake County, north of Chicago. It is a tenant command, meaning that although it is located on the base, it has a separate chain of command.

File:Inspectioncircaworldwar1.jpg
An inspection during World War I.

After the Spanish–American War, the U.S. Navy began investigating 37 sites around Lake Michigan in order to locate a new training center in the Midwest, an area that contributed 43 percent of the Navy’s recruits at the time.[1]

Illinois Congressional Representative and chairman of the Committee on Naval Affairs (1900–1911) George Edmund Foss pressed for the decision to locate the center at its present location, and was later called "The Father of Great Lakes". Foss Park, just north of the base in North Chicago is named in his honor. It is likely the facility would have been located elsewhere had it not been for the $175,000 contribution of the Merchants Club of Chicago to purchase the land.[1]

Rear Admiral Albert A. Ross was the station’s first commander, and the base's Ross Field and Ross Auditorium were later named in his honor. The first flag was planted on site on 1 July 1905. President William H. Taft dedicated the station six years later on 28 October 1911. In that same year the station received its first trainee, Seaman Recruit Joseph W. Gregg.[2]

Naval Station Great Lakes was at the forefront of the racial integration of the Navy. African-Americans were permitted to enlist for general service in the middle of 1942 receiving training at Great Lakes as well as Hampton, Virginia. Previously they had been restricted to special duties.[3] The Navy commissioned its first African-American officers, later known as the "Golden Thirteen," at Great Lakes in February 1944. In July 1987, building 1405, the Golden Thirteen Recruit In-Processing Center, was dedicated in their honor. The surviving eight attended the ceremony.[2]

Navy recruit training is now exclusively conducted at Naval Station Great Lakes' Recruit Training Command. Prior to the mid-1990s, recruit training facilities included Naval Training Center Orlando and Naval Training Center San Diego. Female recruit training was previously limited to the Orlando facility. The Base Realignment and Closure Commission of 1993 resulted in the consolidation of recruit training to Great Lakes. Following the consolidation, the Navy undertook a massive recapitalization (recap) program to upgrade the Great Lakes Recruit Training facility.[4] The recap included the construction of Camp John Paul Jones, a 48-acre (190,000 m2) site on land formerly owned by the Veterans Administration Hospital adjacent to Camp Porter.[5] New barracks were also constructed, and are referred to as "ships" by the recruits. Each "ship" was also named after an important ship in naval history, such as USS John F. Kennedy and USS Enterprise. Each "ship" can house up to 1300 recruits during training. 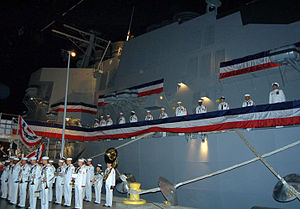 U.S. Navy sailors man the rails of the training simulator, USS Trayer (BST-21), which was completed in June 2007. 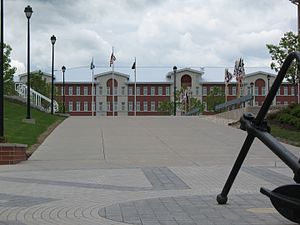 The USS Enterprise Recruit Barracks Building is the eighth of fourteen built as part of a $763 million recapitalization program.[8] 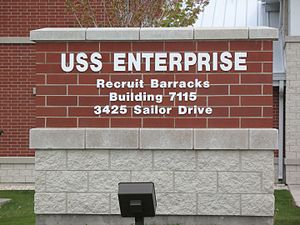 The building is named after the eight USS Enterprises that have borne the name,[9] including the two famous aircraft carriers pictured around the building's quarterdeck. The first is CV-6, which was a ship of the Yorktown class launched in 1936, the most-decorated Navy ship in history, and one of only three American carriers commissioned prior to World War II to survive the war. The nautical flags hanging on the quarterdeck of BLDG 7115 are from CV-6. The second is the CVN-65, the world's first nuclear-powered aircraft carrier. Many of the displays on the quarterdeck of USS Enterprise (BLDG-7115) were donated by the USS Enterprise (CVN-65).

The USS Enterprise (BLDG-7115) has 120,000 square feet (11,000 m2) of space, enough to accommodate 16 recruit divisions of up to 88 recruits each. This facility integrates berthing, classrooms, learning resource centers, a galley, and quarterdeck, all under one roof. Each "ship" has a Ship's Officer who fills the role of Commanding Officer, a Ship's Leading Chief Petty Officer who fills the role of Command Master Chief, and a Chaplain. 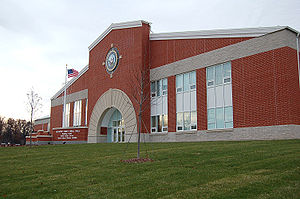 U.S. Navy recruits begin their journey at Building 1405, Golden Thirteen, the Recruit In-processing Center in Camp Moffett. Recruits arrive at all hours, but mostly during the night. Before formal training can begin at Recruit Training Command, Recruits are screened medically, dentally, and administratively.[10] They receive a thorough round of inoculations, an initial issue of uniforms, and their first military haircut. They are taught basic grooming standards, the Uniform Code of Military Justice (UCMJ), standards of conduct, and are introduced to their Recruit Division Commander (drill instructor).

This first week of training, called P-Days (processing days), lasts for approximately five days but can run a little longer depending on weekends, holidays, and the schedule of arriving Recruits. During P-days, recruits will be taught the basics of watch standing, they will be given information to memorize, and they will begin learning to organize their gear. P-Days conclude with a commissioning ceremony, led by the Recruit's Group Commander (Ship's Officer) in which their division's guidon (divisional flag displaying division number) is unrolled. This ceremony marks the official start of their training.[10] 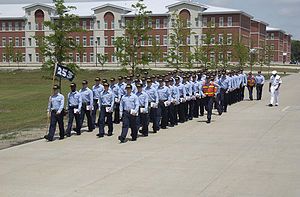 This week is considered the most intense week of physical conditioning. Recruits take their initial swim qualification test, learn military drill, the details of rank and rating, and the Navy core values.

During Week Two, recruits learn the Navy chain of command, custom and courtesies, and basic watchstanding.

Week Three consists of hands-on training. Recruits learn laws of armed conflict, personal finance, basic seamanship, shipboard communication, and Navy ship and aircraft identification. Recruits also take their first physical training test, performing as many sit-ups and push ups as they can in two minutes and a 1.5-mile (2.4 km) timed run, the times for the run, and the amount of push-ups, and sit ups are determined based on the recruits age, which ranges from 18 to 34. Dog tags are distributed this week, and recruits receive their first paychecks.

After several years, the training of the M16 rifle by U.S. Navy recruits has ceased. Any training on the M16 is done outside RTC Great Lakes.

Week Five consists of learning more drill instructions needed for the military drill assessment. Week Five is also called "Hell Week", previously as this was when new recruits take over the daily chores necessary to keep the base running. However, since the redesign of RTC, recruits no longer participate in all aspects of daily chores. It has kept its moniker because this is the most inspection and test intensive week. 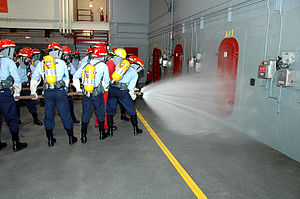 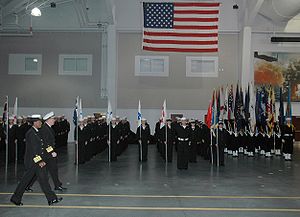 A recruit graduation at the USS Midway Ceremonial Drill Hall in January 2008.

Week Seven is the last week of Navy Basic Training. These seven weeks, combined with Processing Week, make up the approximate eight-week training cycle that each recruit must complete before graduating. Week seven includes a comprehensive test of the material covered by Navy Basic Training in a 12-hour exercise called "Battle Stations". This reinforces much of the instruction learned during Basic Training. Recruits must pass all the requirements of Basic Training to participate in "Battle Stations". Once recruits have successfully completed "Battle Stations" they become Sailors, don their Navy utility cover, also known as the utility cap or eight-point cover, and Pass In Review (PIR) at the USS Midway, Ceremonial Drill Hall. This officially marks the recruit's graduation and entrance into the United States Navy.