From Infogalactic: the planetary knowledge core
Jump to: navigation, search
For other uses, see The Red Room. 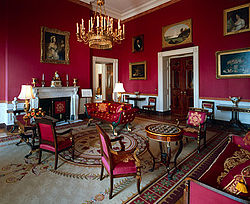 The Red Room, looking northwest during the administration of Bill Clinton. 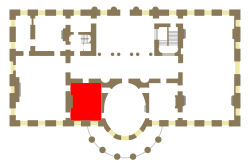 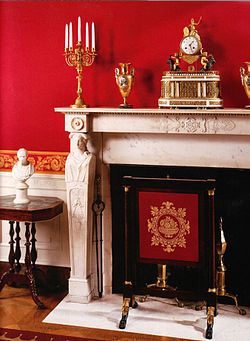 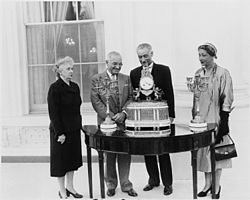 President Truman at the White House receiving a musical clock and two candelabra, a gift for the renovated White House presented by Henri Bonnet, the French Ambassador to the United States, in behalf of French President Vincent Auriol.

The Red Room is one of three state parlors on the State Floor in the White House, the home of the President of the United States. The room has served as a parlor and music room, and recent presidents have held small dinner parties in it. It has been traditionally decorated in shades of red.

The room is approximately 28 feet by 22.5 feet. It has six doors, which open into the Cross Hall, Blue Room, South Portico, and State Dining Room.

Through most of the nineteenth century the Red Room saw a fast changing series of styles from American Empire, Renaissance Revival, Rococo Revival, and the Aesthetic Movement. Furnishings from earlier administrations were sold at auction to fund the acquisition of newer, more fashionable furniture.

The 1819 Italian marble mantel, with caryatid supports, is one of a pair ordered by President James Monroe and originally installed in the State Dining Room. In 1902, President Theodore Roosevelt selected Charles Follen McKim of the New York architectural firm McKim, Mead & White to renovate the White House. Among McKim's changes were moving the mantels from the State Dining Room to the Red Room and Green Room, and removing the assortment of mismatched furniture that had accumulated over the years.

The walls were hung with burgundy silk velvet. A late nineteenth century suite of stuffed Turkish-style furniture was upholstered in the same shade.

Addition of a new attic story during the Coolidge administration placed great strain on the building's structure. By 1951 the house had become unsound and President Truman directed a major reconstruction. The building's interior was largely dismantled, with some of the architectural elements being numbered and stored. After a steel infrastructure was installed, those elements were restored in their original configuration. The Red Room was dismantled and reconstructed during this period. Installation of air conditioning in 1953 and 1954 required the ceiling height be reduced by approximately 18" and a new plaster ceiling with a somewhat generic pattern of stars was installed. Having nearly no furniture original to the house, Truman hired the New York department store B. Altman's design department to oversee the refurnishing of the house. In the Red Room a red silk damask in the same pattern as before the reconstruction was installed on the walls.

The Louis XVI style mantel clock is French, c. 1780–85, and was a gift to the American nation in 1954 from President Vincent Auriol of France following completion of the Truman reconstruction of the house (1949–52).

Most furniture presently found in the Red Room, though antique, was acquired during the Kennedy and Nixon administrations.

During the Kennedy White House restoration, First Lady Jacqueline Kennedy with advice from interior designer Stéphane Boudin selected the American Empire style for the room. The Red Room was the first parlor completed during the restoration. Empire motifs are seen in anthemion, dolphins, acanthus leaves, lion heads, and sphinxes (Egyptian motifs became popular after Napoleon's 1798-1801 campaign in Egypt). Several pieces of furniture by the French-born New York cabinetmaker Charles-Honoré Lannuier including a labeled c. 1810 center table or guéridon with gilded bronze mounts and an inlaid top of Italian marble were acquired for the room. It is considered the French-American cabinetmaker's masterpiece. A thirty-six branched French chandelier c. 1805, carved of wood and gilded hangs in the room. Boudin used antique French Bronze and tole bouillotte lamps on tables to light the room.

The furniture was upholstered in cerise red silk of the same shade as that on the walls with a pattern of gold medallions, scrolls, and fruit basketscopied from an early 19th-century French document provided by Boudin. The wall covering – a corded silk twill, decorative tapes and upholstery fabric were all produced by the American textile manufacturer Scalamandré Silks. Window drapery was simple, straight Napoleonic "campaign" panels of the same silk as the walls, and bordered with the decorative tape used above the dado. An Empire style sofa owned by Nellie Custis, daughter of Martha Washington was acquired and placed in the room. A c. 1815 French Savonnerie rug in shades of red, cream and sage was acquired for the room during the Kennedy restoration and has been copied to prevent wear. The rug features a center medallion of red anthemion with borders of laurel leaf, roses, and medallions similar to the patterns found in the room's upholstery and decorative tapes.

In 1971 the room was redecorated by First Lady Pat Nixon with advice from a new White House curator Clement Conger who collaborated with architect and designer Edward Vason Jones. Conger replaced a generic plaster molding and ceiling medallion installed during the Truman reconstruction with historically accurate molding profiles and a new ceiling medallion.

Conger used the workshop of Franco Scalamandré for textiles, keeping the motif of medallions and scrolls, but changed the red color used by the Kennedys to a warmer more scarlet shade of red. On the south wall of the room between two windows a large gilded bracket was installed to hold a bust of President Martin Van Buren carved by Hiram Powers. A portrait of Van Buren's daughter-in-law, Angelica Singleton Van Buren, painted in 1842 by Henry Inman hangs above the mantel. The portrait includes a representation of the marble bust.

Drapery panels of yellow-gold silk satin with elaborate swags and jabots of red with gold medallions with handmade fringe recall a description of drapery used here during Dolley Madison's day. The curtains were designed by Edward Vason Jones, and are based on historical patterns held by the Society for the Preservation of New England Antiquities (now called Historic New England) and the Metropolitan Museum of Art. Conger returned use of the decorative tape along the ceiling moulding but not above the dado.

The 2000 refurbishment of the Red Room led by First Lady Hillary Clinton with advice from the Committee for the Preservation of the White House, and White House curator Betty Monkman retained the general form of Clement Conger's 1971 design. The color for walls and upholstery was changed to a deeper carmine red that historians considered more typical of nineteenth-century American manufactured textiles. The wide decorative tape, like those used in the Kennedy administration was installed above the dado.

Refurbishments of the White House's historic rooms happen on a regular basis. Input from the current first family, along with reference to historical documents and sometimes new research help guide the decisions of the committee and curator.

Gilbert Stuart's "Lansdowne portrait of Washington", presently in the East Room originally hung in the Red Room providing the colloquial name the "Washington Parlor." Stuart's 1804 portrait of Dolley Madison also hangs here, along with other portraits, still lifes, and landscapes.

Benjamin Latrobe's 1803 drawing of the White House's first floor indicates that the Red Room served as "the President's Antichamber" (sic) for the president's "Library & Cabinet" next door in the location of the present State Dining Room. Jefferson kept a caged magpie in the room. During the James Madison administration, the antechamber became the "Yellow Drawing Room" and the scene of Dolley Madison's fashionable Wednesday night receptions. James Monroe purchased furnishings for the Red Room in the Empire style, as he had for the Blue Room to furnish the rebuilt White House following its burning by the British in 1814.

The Madisons, Lincolns, Grants, and Kennedys all used the Red Room as a music room. A guitar, piano and music stands were kept in the room. Today a music stand beside the fireplace recalls that earlier use of the room.

Dolley Madison, the second first lady, ordered a piano she particularly wanted. Along with red velvet curtains for the drawing room.

President Ulysses Grant, fearing disruption of the transition of power to Rutherford B. Hayes (because of the latter's contested election) had the new president-elect secretly sworn into office in the Red Room the evening before the inauguration. The Grants used the Red Room as a family living room. Eleanor Roosevelt used the Red Room for meeting with women members of the press. Following the State Funeral for President John F. Kennedy, Mrs. Kennedy received foreign heads of state in the Red Room. The Reagans frequently used this room for official photographs with visiting heads of state. The Clintons favored the room for small dinner parties.

Several acquisitions of period furniture subsequent to the Kennedy restoration replaced four chairs, two card tables and added a small "mixing" table by Lannuier. The most significant recent addition to the room is a tall rectilinear secretary desk attributed to Charles-Honoré Lannuier. It was a gift of the White House Historical Association during the Clinton administration, on the occasion of the two hundredth anniversary of the completion of the house.