Relevance is the concept of one topic being connected to another topic in a way that makes it useful to consider the first topic when considering the second. The concept of relevance is studied in many different fields, including cognitive sciences, logic, and library and information science. Most fundamentally, however, it is studied in epistemology (the theory of knowledge). Different theories of knowledge have different implications for what is considered relevant and these fundamental views have implications for all other fields as well.

"Something (A) is relevant to a task (T) if it increases the likelihood of accomplishing the goal (G), which is implied by T." (Hjørland & Sejer Christensen,2002).[1]

A thing might be relevant, a document or a piece of information may be relevant. The basic understanding of relevance does not depend on whether we speak of "things" or "information". For example, the Gandhian principles are of great relevance in today's world.

Epistemology is not just one domain among others. Epistemological views are always at play in any domain. Those views determine or influence what is regarded relevant. 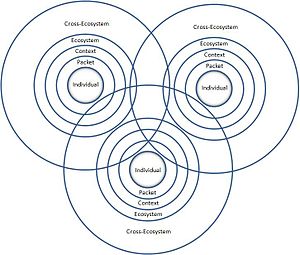 Graphic of relevance in digital ecosystems

During the 1960s, relevance became a fashionable buzzword, meaning roughly 'relevance to social concerns', such as racial equality, poverty, social justice, world hunger, world economic development, and so on. The implication was that some subjects, e.g., the study of medieval poetry and the practice of corporate law, were not worthwhile because they did not address pressing social issues.[citation needed]

The economist John Maynard Keynes saw the importance of defining relevance to the problem of calculating risk in economic decision-making. He suggested that the relevance of a piece of evidence, such as a true proposition, should be defined in terms of the changes it produces of estimations of the probability of future events. Specifically, Keynes proposed that new evidence e is irrelevant to a proposition, given old evidence q, if and only if p/q & e = p/q and relevant otherwise.

There are technical problems with this definition, for example, the relevance of a piece of evidence can be sensitive to the order in which other pieces of evidence are received.

In 1986, Dan Sperber and Deirdre Wilson drew attention to the central importance of relevance decisions in reasoning and communication. They proposed an account of the process of inferring relevant information from any given utterance. To do this work, they used what they called the "Principle of Relevance": namely, the position that any utterance addressed to someone automatically conveys the presumption of its own optimal relevance. The central idea of Sperber and Wilson's theory is that all utterances are encountered in some context, and the correct interpretation of a particular utterance is the one that allows most new implications to be made in that context on the basis of the least amount of information necessary to convey it. For Sperber and Wilson, relevance is conceived as relative or subjective, as it depends upon the state of knowledge of a hearer when they encounter an utterance.

Sperber and Wilson stress that this theory is not intended to account for every intuitive application of the English word "relevance". Relevance, as a technical term, is restricted to relationships between utterances and interpretations, and so the theory cannot account for intuitions such as the one that relevance relationships obtain in problems involving physical objects. If a plumber needs to fix a leaky faucet, for example, some objects and tools are relevant (i.e. a wrench) and others are not (i.e. a waffle iron). And, moreover, the latter seems to be irrelevant in a manner which does not depend upon the plumber's knowledge, or the utterances used to describe the problem.

A theory of relevance that seems to be more readily applicable to such instances of physical problem solving has been suggested by Gorayska and Lindsay in a series of articles published during the 1990s. The key feature of their theory is the idea that relevance is goal-dependent. An item (e.g., an utterance or object) is relevant to a goal if and only if it can be an essential element of some plan capable of achieving the desired goal. This theory embraces both propositional reasoning and the problem-solving activities of people such as plumbers, and defines relevance in such a way that what is relevant is determined by the real world (because what plans will work is a matter of empirical fact) rather than the state of knowledge or belief of a particular problem solver.

The meaning of "relevance" in U.S. law is reflected in Rule 401 of the Federal Rules of Evidence. That rule defines relevance as "having any tendency to make the existence of any fact that is of consequence to the determinations of the action more probable or less probable than it would be without the evidence." In other words, if a fact were to have no bearing on the truth or falsity of a conclusion, it would be legally irrelevant.

This field has considered when documents (or document representations) retrieved from databases are relevant or non-relevant. Given a conception of relevance, two measures have been applied: Precision and recall:

Precision is thus a measure of the amount of noise in document-retrieval.

Relevance itself has in the literature often been based on what is termed "the system's view" and "the user's view". Hjørland (2010) criticize these two views and defends a "subject knowledge view of relevance".