From Infogalactic: the planetary knowledge core
Jump to: navigation, search
For other uses, see Baden (disambiguation).

The Republic of Baden (German: Republik Baden) was a German state that existed during the time of the Weimar Republic, formed after the abolition of the Grand Duchy of Baden in 1918. It is now part of the modern German state of Baden-Württemberg.

With revolution threatening the German Empire in the dying days of World War I, the state ministry of the Grand Duchy of Baden passed an electoral reform on 2 November 1918 in a final attempt to preserve the monarchy there. On 8 November, workers' and soldiers' councils were established in Lahr and Offenburg. On the following day, similar councils were established in Mannheim and Karlsruhe and the entire Badische state ministry stepped down.

On 10 November, a provisional government was formed in Karlsruhe and an assembly of the various revolutionary councils was held on the following day. On 13 November, Grand Duke Frederick II, relinquished all governing duties and eventually abdicated on 22 November, almost a week before the abdication of Kaiser Wilhelm II.

The provisional government declared the establishment of the freie Volksrepublik Baden (Free Peoples' Republic of Baden) on 14 November 1918, and set 5 January 1919 as the date for new elections.

A national assembly was created on January 12, 1919, with the Christian democratic Centre Party emerging as the strongest party ahead of the centre-left SPD. Together, these two parties received 91.5% of all votes. On April 1, the Badische parliament (Landtag) formed a government from members of the Weimar Coalition. Until 1933, Baden was mostly governed by the Centre Party.

Baden, like all other German states, was subject to the process of Gleichschaltung in 1933, which effectively abolished all states - in practice, if not in law. The elected president of Baden was replaced with the Nazi-appointed Walter Köhler, although administrative power in the region truly rested with Robert Heinrich Wagner, the Gauleiter of Baden and Reichsstatthalter for Alsace-Lorraine. Between 1940 and 1944, the Gau of Baden was renamed "Baden-Elsass" and extended westwards to include much of Alsace.

Through the Allied occupation of post-war Germany, Baden was divided between the American and French occupation zones. The division was made so that the Autobahn connecting Karlsruhe and Munich (today the A8) was completely contained within the American zone. This northern American-administered area became part of Württemberg-Baden on 19 September 1945[4] while the southern half (known as South Baden or simply "Baden") was placed under French administration.

These two parts of Baden were reunited and merged with the former state of Württemberg on 23 April 1952 to form the new state of Baden-Württemberg. 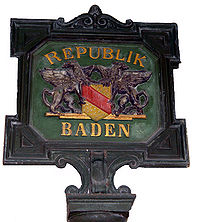 Baden was subdivided into four administrative districts (Landeskommissärbezirke, similar to the modern Regierungsbezirke) based in Karlsruhe, Mannheim, Freiburg and Konstanz. These districts were further divided into a total of 53 Amtsbezirke (in 1924, this number was reduced to 40). These were divided again into a total of 1,536 municipalities.[5]

Following the constitution, passed in 1921, the President of Baden was an elected from the standing members of the Baden Landtag for a 1-year term.[2] After Gleichschaltung, Baden was governed by appointed Nazi officials.