From Infogalactic: the planetary knowledge core
(Redirected from Reverend)
Jump to: navigation, search
For other uses see Reverend (disambiguation) 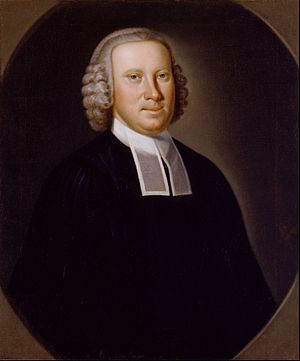 Portrait of the Reverend Richard Brown by John Hesselius

The Reverend is a style of address[1] most often placed before the names of Christian clergy and ministers. There are sometimes differences in the way the style is used in different countries and church traditions. The Reverend is correctly called a style but is often and in some dictionaries called a title, form of address or title of respect.[2] The style is also sometimes used by leaders in non-Christian religions such as Judaism and Buddhism.

The term is an anglicisation of the Latin reverendus, the style originally used in Latin documents in medieval Europe. It is the gerundive of the verb revereri (to respect; to revere) which may be taken as a gerundive or a passive periphrastic, therefore meaning [one who is] to be revered/must be respected. The Reverend is therefore equivalent to The Honourable or The Venerable.

In traditional and formal English usage, both British and American, it is still considered incorrect to drop the definite article, the, before Reverend. In practice, however, the is often not used in both written and spoken English. When the style is used within a sentence, the is correctly in lower-case.[3] The usual abbreviations for Reverend are Rev., Revd and Rev'd.

The Reverend is traditionally used as an adjectival form with first names (or initials) and surname (e.g. The Reverend John Smith or The Reverend J.F. Smith); The Reverend Father Smith or The Reverend Mr Smith are correct though now old-fashioned uses. Use of the prefix with the surname alone (The Reverend Smith) is considered a solecism in traditional usage: it would be as irregular as calling the person in question "The Well-Respected Smith". In some countries, especially Britain, Anglican clergy are acceptably addressed by the title of their office, such as Vicar, Rector, or Archdeacon.

In the 20th and 21st centuries it has been increasingly common for reverend to be used as a noun and for clergy to be referred to as being either a reverend or the reverend (I talked to the reverend about the wedding service.) or to be addressed as Reverend or, for example, Reverend Smith or the Reverend Smith. This has traditionally been considered grammatically incorrect on the basis that it is equivalent to referring to a judge as being an honorable or an adult man as being a mister.[4][5]

Although it is not a formally correct use of the term,[6] Reverend is sometimes used alone, without a name, as a reference to a member of the clergy and treated as a normal English noun requiring a definite or indefinite article (e.g. We spoke to the reverend yesterday.). It is never correct, though, to form the plural Reverends. Some dictionaries,[7] however, do place the noun rather than the adjective as the word's principal form, owing to an increasing use of the word as a noun among people with no religious background or knowledge of traditional styles of ecclesiastical address. When several clergy are referred to, they are often styled individually (e.g. The Reverend John Smith and the Reverend Henry Brown); but in a list of clergy, The Revv is sometimes put before the list of names, especially in the Roman Catholic Church in the United Kingdom and Ireland.[8]

In some churches, especially Protestant churches in the United States, ordained ministers are often addressed as Pastor (as in Pastor John or Pastor Smith). Pastor, however, is considered more correct in some churches when the minister in question is the head of a church or congregation.[citation needed]

Some female Anglican or Old Catholic priests use the style The Reverend Mother and are addressed as Mother.

The Reverend may be modified to reflect ecclesiastical standing and rank. Modifications vary across religious traditions and countries. Some common examples are:

None of the clergy are usually addressed in speech as Reverend or The Reverend alone. Generally, Father is acceptable for all three orders of clergy, though in some countries this is customary for priests only. Deacons may be addressed as Deacon, honorary prelates as Monsignor; bishops and archbishops as Your Excellency (or Your Grace in Commonwealth countries), or, in informal settings, as Bishop, Archbishop, etc.

In some countries, including the United States, the title Pastor (such as Pastor Smith in more formal address or Pastor John in less formal) is often used in many Protestant traditions rather than The Reverend or Reverend. The United Methodist Church in the United States often addresses its ministers as Reverend (e.g., Reverend Smith). The Reverend, however, is still used in more formal or official written communication.

African American National Baptists usually refer to their pastors as The Reverend.

Among Southern Baptists in the United States, The Reverend is formally written but the pastor is sometimes orally addressed as Brother (Brother Smith), as New Testament writers describe Christians as being brothers and sisters in Christ, or simply as "Pastor".

In some Methodist churches, especially in the United States, ordained and licensed ministers are usually addressed as Reverend or Pastor, unless they hold a doctorate, in which case they are often addressed in formal situations as The Reverend Doctor. In informal situations Reverend or simply Pastor is used. The Reverend, however, is used in more formal or in written communication. Also, Brother or Sister is used in some places. Use of these forms of address differs depending on the location of the church or Annual Conference.

Methodist bishops are referred to as Bishop, not Reverend Bishop, Your Grace or other forms of address used in other episcopal (bishop-led, connectional) churches. The reason for this is that bishops in Methodist polity are not ordained to the higher office but remain elders who are simply appointed to the ministry of a bishop.[citation needed]

In British Methodism, ordained ministers can be either presbyters (ministers of word and sacrament) or deacons (ministers of witness and service). Presbyters are addressed as The Revd (with given name and surname) or as Mr/Mrs/Miss/Ms with surname alone.

Like some other groups that assert the lack of clerical titles within the church as narrated in the New Testament, congregations in the Restoration Movement (i.e., influenced by Barton Warren Stone and Alexander Campbell), often disdain use of The Reverend and instead use the more generalized designation Brother. The practice is universal within the Churches of Christ and prevalent in the Christian Churches and Churches of Christ but has become uncommon in the Disciples of Christ, which use The Reverend for ordained ministers.[13][14]

Internally, members of the priesthood do not use The Reverend as a style, but are generally known as "brother" or "sister" or by their specific priesthood office ("deacon", "teacher" or "priest" are often appended after the person's name, instead of, for example, "Deacon John Adams" or "Deacon Adams", and generally only in written form; in contrast, elders, bishops, evangelists, apostles, etc. are often, for example, known as "Bishop John Smith" or "Bishop Smith"). Any member of the priesthood who presides over a congregation can, and often is, known as "pastor" or (if an elder), "presiding elder". Such use might only be in reference to occupying that position ("she is the pastor") as opposed to being used as a style ("Pastor Jane"). Priesthood members presiding over multiple congregations or various church councils are often termed "president". Externally, in ecumenical settings, The Reverend is sometimes used.

The Church of Jesus Christ of Latter-day Saints

The Reverend is not used, but the term "Elder" is often used (for men who hold priesthood offices of elder or high priest) regardless of seniority. In written usage, usually only general authorities of the church (who have church-wide responsibility or outside a single locale) are addressed as Elder in writing, regardless of their specific title. When including the title, it is appended after the name, such as Elder L. Tom Perry of the Quorom of the Twelve Apostles.

In formal spoken usage, the same would be appropriate. After the first usage, whether spoken or written, it is appropriate to use only Elder {surname} (i.e. Elder Perry). Although those holding the offices of elder and high priest in their local congregations technically hold the office of "elder" within the church, they are not addressed as such in writing or in speech. The men are simply addressed as "brother" and women are addressed as "sister".

There are several exceptions:

All members of the Quoroms of the Seventy are addressed as Elder, with specific titles used as per above.

All three members of the Stake Presidency are addressed as President {surname}. Stakes are roughly comparable to a diocese of the Roman Catholic Church.

Presidents of stake and ward (similar to a Roman Catholic parish) auxiliary presidencies - both men and women - (i.e. relief society, young men, young women, etc.) may be addressed as President {Surname}, although for these auxiliary groups, Brother or Sister is usually appropriate in person to person communication.

Bishops of their ward are addressed as Bishop {surname}.

Certain special positions have their own styles, such as Patriarchs (Patriarch {surname}), the Presiding Bishop of the Church (Bishop {surname}), etc.

All other members of the church, regardless of specific title, may be addressed as Brother or Sister {surname} and in writing no prefix title is necessary.[15]

Virtually all Japanese Buddhist traditions, especially Jodo Shinshu, which have carried over to the West style priests as the Reverend rather than the Venerable, the religious style often used by Chinese and Tibetan Buddhists. This was a practice borrowed from Christianity and has been in use since the early 20th century.

Most Jewish ministers of religion have the title Rabbi, which denotes that they have received rabbinical ordination (semicha). They are addressed as Rabbi or Rabbi Surname. It is, however, not essential to be a rabbi to practice as a Jewish minister of religion. In particular, few cantors (chazzanim) are rabbis but many have authority to perform functions such as witnessing marriages. In this case they often use the style The Reverend; more usually, however, a cantor is called Cantor or Cantor Surname.

Some small communities without a rabbi will be led by a knowledgeable person who is styled as "Reverend". This is most often formally bestowed on the individual and is a requirement in some countries, which require a formally recognised religious leader to perform formal communal functions such as weddings and funerals.