From Infogalactic: the planetary knowledge core
Jump to: navigation, search
For other uses, see RIA (disambiguation). 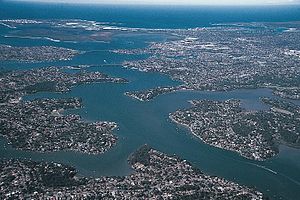 Georges River, in the southern suburbs of Sydney (Australia) is a ria, or drowned river valley. The deeply indented shape of the ria reflects the dendritic pattern of drainage that existed before the rise in sea level that flooded the valley.

A ria is a coastal inlet formed by the partial submergence of an unglaciated river valley. It is a drowned river valley that remains open to the sea. Typically, rias have a dendritic, treelike outline although they can be straight and without significant branches. This pattern is inherited from the dendritic drainage pattern of the flooded river valley. The drowning of river valleys along a stretch of coast and formation of rias results in an extremely irregular and indented coastline. Often, there are islands, which are summits of partly submerged, pre-existing hill peaks. A ria coast is a coastline having several parallel rias separated by prominent ridges, extending a distance inland.[1][2][3] The sea level change that caused the submergence of a river valley may be either eustatic (where global sea levels rise), or isostatic (where the local land sinks). The result is often a very large estuary at the mouth of a relatively insignificant river (or else sediments would quickly fill the ria). The Kingsbridge Estuary in Devon, England, is an extreme example of a ria forming an estuary disproportionate to the size of its river; no significant river flows into it at all, only a number of small streams.[3]

The word ria comes from Portuguese ria or Galician ría, which is related to Spanish and Galician río and Portuguese rio (river). Rias are present all along the Galician coast in Spain. As originally defined, the term was restricted to drowned river valleys cut parallel to the structure of the country rock that was at right angles to the coastline. However, the definition of ria was later expanded to other flooded river valleys regardless of the structure of the country rock.

For a period of time, European geomorphologists[4] regarded rias to include any broad estuarine river mouth, including fjords. These are long, narrow inlets with steep sides or cliffs, created in a valley carved by glacial activity. In the 21st century, however, the preferred usage of ria by geologists and geomorphologists is to refer solely to drowned unglaciated river valleys. It therefore excludes fjords by definition, since fjords are products of glaciation.[1][2][3] 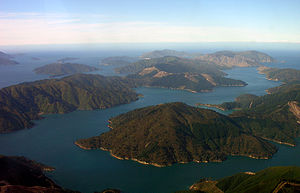 Ria can amplify the effects of tsunami, as demonstrated in the seismicity of the Sanriku coast, most recently in the 2011 Tōhoku earthquake and tsunami.