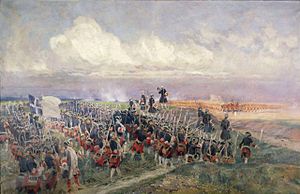 The Battle of Fontenoy by Édouard Detaille. Oil on canvas.

Captain Richard Avery Hornsby is an almost forgotten Sunderland military figure from the 18th century. He became famous after taking on a boat full of French pirates almost single-handedly - and winning.

Adventures on the high seas

It was the height of the War of the Austrian Succession when Richard Avery Hornsby, who lived in Sunderland’s Vine Street, set off for The Hague on his brig, the Wrightson and Isabella.

His little ship was laden with malt and barley for the voyage and he had a crew of just five men and two boys. Such was the routine nature of the trip, that the Isabella was built for speed rather than battle, boasting just four small guns, two swivel cannons and a few blunderbusses.

With such poor defences, she must have appeared an easy target to the 75 French pirates on board the Marquis of Brancas, who spotted her off the Dutch coast. But the Brancas’ ten guns, eight swivel cannons and 300 small arms proved no match for the fighting spirit of the British on that fateful day of June 13, 1744.

“Will you stand by me lads?” Hornsby asked his men as the pirates opened fire. “Aye, aye, to the last,” came their reply. After raising the British flag, Hornsby ordered his crew to return the fire – despite the hail of bullets being shot at them. Twice the enemy tried to board the Isabella, and twice Hornsby stopped them in their tracks as his crew fought alongside him.

After an hour of bloody battle, the captain of the Brancas bawled over to Hornsby to “Strike you English dog.” Hornsby’s only reply was to challenge the Frenchman to come on board – “if he dared.” It was not a dare the captain cared to take up. Instead, he threw 20 of his sailors onto the Isabella, but the blunderbusses of the British crew soon sent them into retreat.

When the ships then became entangled, Hornsby and his mate shot several of the pirates as they tried to lash the ships together. Once again the French captain called on Hornsby to strike his flag and surrender, sending yet more men across to the Isabella when he refused. But Hornsby and his sailors kept up their constant fire and, for a second time, the pirates were forced to leave – hauling their dead behind them on hooks.

As battle raged around him, Hornsby noticed the French crowded together around their main mast. Taking his chance, he aimed a blunderbuss at them – but it had mistakenly been double-loaded.The History of the Town and Port of Sunderland, an 1830 book by James Burnett, states: “It burst and threw him down, but in an instant he started up, though much bruised.”

The shot caused “terrible havoc” among the French, who fled the Isabella – leaving their pistols, pole-axes and graplings behind them. But the fierce gun battle between the ships continued for another two hours, each firing into the other while just yards apart. “The Isabella’s hull, masts, sails and rigging were shot through and through, and her ensign dismantled,” the book states.

A shot from the British side eventually caused the Brancas to sheer off, giving Hornsby a chance to put the tattered flag back up. Then, thinking the French had given up the fight, he led his shattered crew into giving the pirates three rousing cheers. But the pirates were not yet defeated and, as the cheers faded, so the Brancas returned – firing a volley of shots into the Isabella.

Wounded in the temple and “bleeding profusely,” Hornsby refused to give in and, once again, called his crew to arms. Three tremendous broadside shots were then fired at the Isabella, but the British returned the fire with equal ferocity. Once again the French ship drew alongside the British brig, but this time the pirates refused their captain’s demands to go aboard and face Hornsby – knowing now what his crew was capable of.

Eventually admitting defeat, the French captain cut the lashings and started to sail away – only for his ship to blow up just seconds later. The tiny British merchant ship had taken on and sunk a formidable fighting ship. Brancas was now lying at the bottom of the sea. Of the 75 pirate sailors on board, 36 were killed or wounded in battle and all but three drowned when it sank.

Hornsby was later awarded a gold medal and chain worth £100 for his bravery by King George II, at a ceremony held at Kensington Palace in September 1744. Each of his men – all from Sunderland – were given a bounty of £5, while 40 shillings was awarded to the boys in his crew.

It was thought that Captain Hornsby was buried in St Michael & All Angels Churchyard, Houghton-le-Spring, near Sunderland; however, a search of the burial registers by local historian Paul Lanagan revealed that the Richard Hornsby buried in the churchyard had died in 1818 aged 67, meaning he would have been 7 years old at the time of the pirate incident.

There is an old proverb I've lately thought on,
'When you think of a friend you're sure to find none';
For when that I thought to see Lestock come by,
He was five miles a distance, and would not come nigh;
But for all that misfortune, we never could start,
We pursued after them with a true British heart.
A mile's distance next day, they at us did fire,
But in half an hour we to them drew nigher,
Until that we came within pistol-shot,
Then we did let fly ; and why should we not ?
As we sent 'em one broadside, another did come,
Which made our cannons to play, bomb ! bomb !
Our admiral then took his glass in his hand,
To espy what he could, as you shall understand;
A double shot came unto him so nigh,
That it took off the place where his arm did lye.
But for that misfortune, and all that foul play,
He held 'em six hours in hot battle that day.
The night being come, they straightway gave o'er,
And went off with their cripples; we see 'em no more.
But now that the war is proclaim'd against France,
When we see them again we will make 'em to prance;
And if ever they into our presence do come,
We will make our cannons play ' Britons, strike home.'
Then straightway we left them in grief to complain,
Whilst we are carousing along the salt main.
Pray God bless our fleet, and his Majesty too,
And grant them success wherever they go.
Concluding as this, and my song to end,
In Matthews' brave ship these verses were penn'd.

A slightly newer song in his praise: In Praise of Brave Captain Hornsby

Come all you brave sailors that plough on the main,
And hear of the brave Captain Hornsby by name;
How bravely he acted and play'd his own part,
That he made the proud Frenchmen to quake in their hearts.