Richwood is a city in Nicholas County, West Virginia, United States. The population was 2,051 at the 2010 census. A former coal and lumber boom town, the city's population once flirted with 10,000 but the creation of Route 19 through Summersville caused less traffic through the city and closure of many underground coal mines caused many of Richwood's residents to leave the state in order to find work. The area is currently focusing on niche tourism as a means to revitalize the local economy. It calls itself the "Ramp Capital of the World" and hosts a large festival every April in honor of the pungent wild leek.

The area surrounding the forks of the Cherry River has been populated since the late 18th century CE. Local legend holds that Shawnee chief Blue Jacket was in fact a young white hunter named Marmaduke Van Swearingen who was kidnapped in the area. This theory, however, has generally fallen out of favor with most scholars.

During the 19th century, the area was a sparsely settled semi-wilderness of homesteads and subsistence farms. This changed in 1898 when a railroad was extended into the area, then known as Cherry Tree Bottoms. In 1901, the town was incorporated with its present name, a nod to the abundant hardwood forests in the area. Soon the area possessed a large sawmill and the world's largest clothespin factory. Coal mine closures, however, crippled Richwood's economy in the 1970s and 1980s.

The town was once home to several large businesses and industries. In addition to the sawmill and the clothespin factory, there were other factories that produced wood-based products such as axe-handles and paper. Coal also came into the industry picture during Richwood's boom-era during pre-depression years. During this time the city's population neared 10,000 citizens. Banking was also a white collar industry that succeeded in the city with the large companies investing into the city's financial corporations. Once the large factories closed or relocated, many of the people followed. The final hit was when the coal industry took a downward turn and most of the local coal mines ceased operation. This was combined with a deep mining disaster when one of the local mines collapsed.

The city has also had problems with periodic flooding. Recently, The U.S. Army Corps of Engineers has approved impact studies in order to determine the propriety of the construction of dam on the South Fork of the Cherry River in order to limit future flooding. The proposed name for the possible lake is Eagle Lake. Depending on the exact location of the dam, the reservoir could become the largest lake in the state of West Virginia, surpassing nearby Summersville Lake.

Richwood now seeks to be reborn as both an artisan community and a technology center. The Downtown Richwood Historic District was listed on the National Register of Historic Places in 2001.[6]

Richwood is the headquarters of the Cherry River Navy community organization. Its membership list has included presidents, governors, senators, astronauts, and others who have distinguished themselves for outstanding service to community and country or are deemed worthy of the honor. Among past and present members are Jennings Randolph, Harry Truman, Dwight Eisenhower, Arch Moore, John Echols, Bob Smith, Jim Comstock, Jay Rockefeller, Jon McBride, and Babe Ruth.[7]

Richwood is situated on both sides of a valley located in the Appalachian Mountains.

Richwood is located at Lua error in Module:Coordinates at line 668: callParserFunction: function "#coordinates" was not found. (38.223637, -80.536676).[8] The Cherry River is formed at Richwood by the confluence of its north and south forks. Some of the city is relatively flat bottom land located along the river valley while neighborhoods are located on rather steep terrain, some of which approaches the angle of repose.

At an elevation of approximately 2,200 feet above sea level, a unique setting is created by the Cherry River in which class 3 whitewater rapids are usually created during spring run off through a town of about 2,000 residents. In plain view from some of the city's public streets, this may be the only place in eastern North America where three categories of "twos" (population, elevation, and whitewater difficulty) are met or eclipsed. (Western US example-The Sacramento River at Dunsmuir, CA)

The climate in this area has mild differences between highs and lows, and there is adequate rainfall year round. According to the Köppen Climate Classification system, Richwood has a marine west coast climate, abbreviated "Cfb" on climate maps.[9] 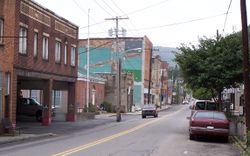 Richwood's Main Street Central Business District went from boom to bust during the 20th century, but has seen the return of specialty shops and an effort to beautify the cityscape in recent years.

While Richwood was the economic center for Nicholas County for most of the 20th Century, the county seat of Summersville has come to be the primary retail and business center during the past 25 years. This is mostly due to the improvement of U.S. Route 19 to a 4-lane highway and the development of business along the corridor. Richwood, however, is still by default the political and economic center of eastern Nicholas County, as it is the only incorporated city in the immediate area.

While Richwood now possesses a small fraction of the retail stores that it once had, the city still has a small shopping plaza which houses a FoodLand is no longer in Richwood. The Facemire's left Richwood w/out a grocery store in 2014]], Rite Aid and Dollar General. Many of the downtown businesses have closed due to competition with larger chain retailers located in nearby Summersville.

Recently, there have been efforts to re-establish the city's industrial sector, such as the establishment of Cherry River Furniture, a manufacturer of home furniture products (the company made the desk used by Governor Bob Wise during his term in office). The elegant handcrafted desk was a gift paid for by the citizens of Richwood and has been used by every Governor to hold office since 2001.

There are efforts to attract visitors to the area for the natural beauty of the adjacent Monongahela National Forest. The mayor welcomed attendees of the 2005 Rainbow Gathering that was held in the forest and took the opportunity to encourage craftspeople to buy property and set up businesses there.[10] Richwood is also home to a small aircraft handling airport known as the Richwood Municipal Airport which is located in the nearby unincorporated community of New Hope.

Richwood's primary road is a two lane route that is the commingling West Virginia Route 39 and West Virginia Route 55. These highways provide access to U.S. Route 19 to the west and U.S. Route 219 to the east. The original construction of the road portion from Marlinton to Richwood over a highly mountainous section of the Monongahela National Forest was instigated by the so-called "Cherry River Navy", thus reducing what was a 3-hour drive on indirect alternate routes to a current 45-minute drive.[7] It is one of the most scenic and relatively remote drives in the eastern US, featuring a number of US National Forest recreation areas with easy access of the main road.

In the early years of the town, the railroad was a popular form of transporting wood, coal, and passengers in and out of Richwood on a daily basis. As time wore on, however, rail traffic gradually, but steadily, decreased. By the early 1980s, trains had been completely replaced by road transportation in the area. The tracks were removed by the end of the decade and the old railroad grade was transformed into a gravel rail-trail for hiking and bicycling.

There were 889 households of which 24.6% had children under the age of 18 living with them, 40.0% were married couples living together, 15.2% had a female householder with no husband present, 5.8% had a male householder with no wife present, and 38.9% were non-families. 35.2% of all households were made up of individuals and 17.3% had someone living alone who was 65 years of age or older. The average household size was 2.21 and the average family size was 2.78.

There were 1,030 households out of which 24.5% had children under the age of 18 living with them, 48.0% were married couples living together, 13.7% had a female householder with no husband present, and 34.5% were non-families. 32.1% of all households were made up of individuals and 17.2% had someone living alone who was 65 years of age or older. The average household size was 2.29 and the average family size was 2.85. 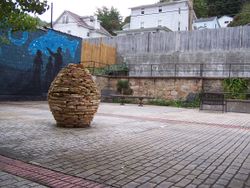 The Sterling Spencer Memorial Sculpture Garden replaced a dilapidated vacant hotel that had partially collapsed. The park is named in honor of a respected wood sculptor from Richwood.

Richwood has a mountain setting with close proximity to the Gauley Ranger District the Monongehela National Forest and access to a great number of recreational areas. Three tributaries of the Gauley River (Williams River, Cranberry River, and Cherry River) all flow wild within this portion of the forest. A scenic highway and visitors center also lie at the intersection of WV 39 and WV 150, which is close to the Cranberry Glades Botanical Area and the Cranberry Wilderness. The Cranberry Glades Botanical Area is the southernmost Canadian bog in the world. Summit Lake offers the only flat water recreation in the immediate area. Richwood is also home to Cherry Hill Country Club, a beautiful nine hole golf course located on top of Hinkle Mountain.

Three schools exist inside the city of Richwood, they include: Cherry River Elementary, Richwood Middle School, and Richwood High School. In 2005 the girls high school softball squad won the school its first team state championship in any sport.

Summersville Regional Medical Center (SMRC) is the area's health care provider along with the health clinic Richwood Family Practice run by SRMC. Prior to June 17, 2008, Richwood Area Community Hospital was the health care provider until failing financial conditions forced it to close. RACH was previously known as Sacred Heart Hospital and was run by the local Catholic Church community. A second hospital known as McClung Hospital also served the area during Richwood's population boom in the early 1900s; that hospital has long since closed.

The Richwood Volunteer Fire Department serves as Richwood's primary fire and rescue service. Richwood Police Department is the city's primary police force. The Nicholas County Sheriff Department and West Virginia State Police, which has a post located in the city, also provide police service as needed. Redi-Care Ambulance provides Emergency Medical Services(EMS) to the city with one station located in the city the station mans two ambulances 24/7 and responds to all medical emergencies in the city.

Due to mismanagement of the city's inner workings the Richwood City Police Department was disbanded in 2013/2014 as the city fought with bad press regarding its treatment of its officers and its chief of police. They now rely mostly on state and county officials to police the entire limit of the town and beyond.