From Infogalactic: the planetary knowledge core
(Redirected from Right of the first night)
Jump to: navigation, search 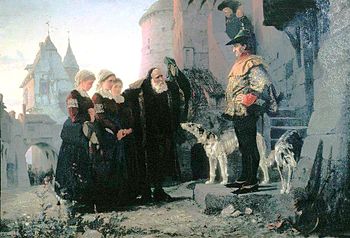 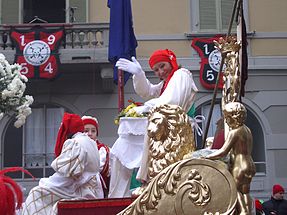 Droit du seigneur (/ˈdrɑː də seɪˈnjɜːr/; French pronunciation: ​[dʁwa dy sɛɲœʁ]), also known as jus primae noctis (/ʒʌs ˈpraɪmiː ˈnɒktᵻs/; Latin pronunciation: [ju:s ˈpri:mae̯ 'nɔktɪs]), refers to a supposed legal right in medieval Europe, and elsewhere, allowing feudal lords to have sexual relations with subordinate women on their wedding night. There is no direct evidence of the right being exercised in medieval Europe, though there are numerous references to it.[1][2]

Herodotus mentions a similar custom among the Adyrmachidae in ancient Libya: "They are also the only tribe with whom the custom obtains of bringing all women about to become brides before the king, that he may choose such as are agreeable to him."[4]

The medieval marriage fine or merchet has been interpreted as a payment for the droit de seigneur to be waived.[5]

The supposed right was abolished by Ferdinand II of Aragon in Article 9 the "Sentencia Arbitral de Guadalupe" of 1486.[6]

In 1527, Scottish historian Hector Boece wrote that the right had existed in Scotland until abolished by Malcolm III.[7] William Blackstone mentioned the custom in his Commentaries on the Laws of England (1765-1769), echoing Boece's claim.[8]

The right was mentioned in 1556 in the Recueil d'arrêts notables des cours souveraines de France of French lawyer and author Jean Papon (1505–1590).[9] Voltaire mentioned the practice in his Dictionnaire philosophique, published in 1764.[10]

In The Origin of the Family, Private Property and the State in 1884, Friedrich Engels argued the "right of first night" had an anthropological origin.[11] Paolo Mantegazza, in his 1935 book The Sexual Relations of Mankind, stated his belief that while not a law, it was most likely a binding custom.

In the nineteenth century, many French people believed that several immoral rights had existed in France during the Ancien Régime, such as the droit de cuissage, the droit de ravage (right of ravage; providing to the lord the right to devastate fields of his own domain), and the droit de prélassement (right of lounging; it was said that a lord had the right to disembowel his serfs to warm his feet in).[citation needed]

As late as the nineteenth century, some Kurdish chieftains (khafirs) in Anatolia reserved the right to bed Armenian brides on their wedding night.[12][13]

In the Hawaiian Islands, marriage in the Western sense did not exist until the arrival of Christian missionaries; indeed, there was not even a word for husband or wife in the language. The privilege for chiefs was often observed, however, according to Sexual Behavior in Pre Contact Hawai‘i: A Sexological Ethnography, by Milton Diamond Ph.D. (Revista Española del Pacifico. 2004. 16: 37-58). A young girl's parents viewed the coupling with favor (Pukui, Haertig, and Lee, 1972, p. 91; Sahlins, 1985, p. 24). If she were lucky, she might conceive his offspring and be allowed to keep it. When western ships arrived, young girls and wives eagerly coupled with sailors who, given their weapons and large ships, may be gods (Pukui, Haertig, and Lee, 1972, p. 92).

In modern times Zaire's president Mobutu Sese Seko appropriated the droit de cuissage when traveling around the country where local chiefs offered him virgins; this was considered a great honor for the virgin's family.[14]