From Infogalactic: the planetary knowledge core
Jump to: navigation, search
This article is about an atmospheric effect. For the effect in nuclear magnetic resonance, see Chemical shift § Factors causing chemical shifts.

A ring current is an electric current carried by charged particles trapped in a planet's magnetosphere. It is caused by the longitudinal drift of energetic (10–200 keV) particles. 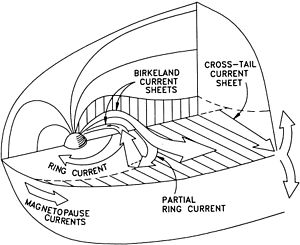 Schematic view of the different current systems which shape the Earth's magnetosphere.

Earth's ring current is responsible for shielding the lower latitudes of the Earth from magnetospheric electric fields. It therefore has a large effect on the electrodynamics of geomagnetic storms. The ring current system consists of a band, at a distance of 3 to 5 RE,[1] which lies in the equatorial plane and circulates clockwise around the Earth (when viewed from the north). The particles of this region produce a magnetic field in opposition to the Earth's magnetic field and so an Earthly observer would observe a decrease in the magnetic field in this area.

The ring current energy is mainly carried around by the ions, most of which are protons. However, one also sees alpha particles in the ring current, a type of ion that is plentiful in the solar wind. In addition, a certain percentage are O+ oxygen ions, similar to those in the ionosphere of Earth, though much more energetic. This mixture of ions suggests that ring current particles probably come from more than one source.

The ring current and geomagnetic storms

During a geomagnetic storm, the number of particles in the ring current will increase. As a result there is a decrease in the effects of geomagnetic field.