Rita Coolidge (born May 1, 1945) is an American recording artist and songwriter. During the 1970s and 1980s, she charted hits on Billboard's pop, country, adult contemporary and jazz charts[1] and won two Grammy Awards with fellow musician and former husband Kris Kristofferson. 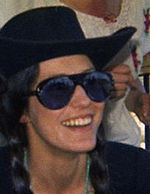 Coolidge at Willie Nelson's 4th of July Picnic in 1972. 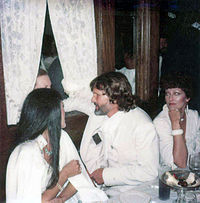 Coolidge with Kris Kristofferson at the private party after the premiere of the movie A Star Is Born, on the third floor of Dillon's Disco on December 18, 1976.

Coolidge was born in Lafayette, Tennessee. Coolidge attended Nashville's Maplewood High School. She graduated from Andrew Jackson Senior High in Jacksonville, Florida. She is a member of Alpha Gamma Delta sorority.[2] She is of Scots and Cherokee ancestry.[3]

Coolidge is a graduate of Florida State University. After singing around Memphis (including a stint singing jingles), she was discovered by Delaney & Bonnie, who took her to Los Angeles where, besides her work with Delaney & Bonnie, she became a popular background singer on many other people's albums.[4] She sang for Leon Russell, Joe Cocker, Bob Dylan, Jimi Hendrix, Eric Clapton, Dave Mason, Graham Nash, and Stephen Stills.[5] She was featured in Joe Cocker's Mad Dogs and Englishmen tour and album, singing Russell's and Bonnie Bramlett's song "Superstar." She became known as "The Delta Lady" and inspired Russell to write a song of the same name for her.[6]

In November 1970, she met Kris Kristofferson at the Los Angeles airport when they were both catching the same flight to Tennessee. He got off in Memphis with her, rather than continue to his intended destination in Nashville. The two married in 1973 and recorded several duet albums, which sold well and earned the duo a Grammy Award for Best Country Performance by a Duo or Group with Vocal in 1974 for From the Bottle to the Bottom, and in 1976 for Lover Please.

Coolidge's greatest success on the pop charts came during 1977–1978 with four consecutive top 25 hits, covers of Jackie Wilson's "(Your Love Keeps Lifting Me) Higher and Higher", Boz Scaggs' "We're All Alone", The Temptations' "The Way You Do The Things You Do", and Marcia Hines' "You".

Coolidge also was among the first hosts on VH1. In 2006, Coolidge recorded a standards album, And So Is Love.[5]

In the recording of the original Classic Rock hit "Layla" by Eric Clapton's band Derek and the Dominoes in 1970, Clapton returned to the studio where he heard the band's drummer Jim Gordon playing a piano piece he had allegedly composed himself separately. Clapton, impressed by the piece, convinced Gordon to allow it to be used as part of the song in the coda section. Though only Gordon has been officially credited with this part, the band's keyboardist Bobby Whitlock claims, "Jim took that piano melody from his ex-girlfriend Rita Coolidge. I know because in the Delaney & Bonnie days, I lived in John Garfield's old house in the Hollywood Hills and there was a guest house with an upright piano in it. Rita and Jim were up there in the guest house and invited me to join in on writing this song with them called "Time." Her sister Priscilla wound up recording it with her husband, Booker T. Jones (of Booker T. & the M.G.'s). Jim took the melody from Rita's song and didn't give her credit for writing it. Her boyfriend ripped her off."[7] "Time" ended up on the 1973 album "Chronicles" by Booker T. and Priscilla. Jim Gordon was later convicted of killing his mother in 1983 after becoming schizophrenic and is still incarcerated as of 2015.[8]

Coolidge is the daughter of "Dick" and Charlotte Coolidge, a minister and schoolteacher, with sisters Linda and Priscilla, and brother Raymond.[9] Coolidge was married to Kris Kristofferson from 1973 to 1980.[1] They have one daughter, Casey. Coolidge previously had romantic liaisons with Stephen Stills and Graham Nash; her leaving Stills for Nash has been cited as a contributing factor behind the initial 1970 breakup of Crosby, Stills, Nash & Young.[10] She was also involved with Leon Russell and Joe Cocker during their Mad Dogs and Englishmen tour. Coolidge married Tatsuya Suda on June 19 2004 in the Cook Islands: Suda is a Japanese citizen who retired in 2010 after a tenure of over twenty-five years as a professor at the Donald Bren School of Information and Computer Sciences (UC Irvine).[11][12]

Coolidge now lives in Fallbrook, California. She is currently a painter and has exhibited her work.[5] Coolidge is also a sister of the Alpha Gamma Delta sorority.

It was announced in September 2014 that Coolidge had contracted with HarperCollins to write her autobiography for publication in 2015: being co-written with Michael Walker, this memoir has the working title Delta Lady.[16]

In 1997, Coolidge was one of the founding members of Walela, a Native American music trio, that also included Priscilla and Priscilla's daughter Laura Satterfield. The trio released studio albums in 1997 (Walela) and 2000 (Unbearable Love), a live album and DVD (Live in Concert) in 2004 and a compilation album (The Best of Walela) in 2007.[17] Walela means hummingbird in Cherokee. Coolidge considered this group important, not only in honoring her Cherokee ancestors but also in bringing their culture to others. Also as part of her Native American heritage, she performed with Robbie Robertson, who is Mohawk, at the 2002 Winter Olympics.[5]