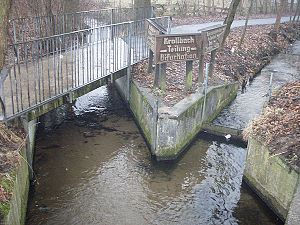 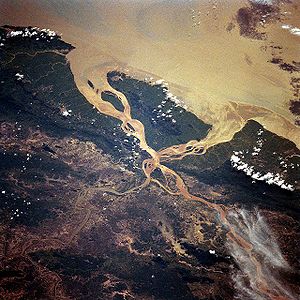 River deltas such as the pictured delta of the Salween River in Myanmar often show bifurcations. The water flows in from the lower section of the image and passes on both sides of the large island in the center.

River bifurcation (from Latin: furca, fork) occurs when a river flowing in a single stream separates into two or more separate streams (called distributaries) which continue downstream. Some rivers form complex networks of distributaries, especially in their deltas. If the streams eventually merge again or empty into the same body of water, then the bifurcation forms a river island.

River bifurcation may be temporary or semi-permanent, depending on the strength of the material which separates the distributaries. For example, a mid-stream island of soil or silt in a delta is most likely temporary. A location where a river divides around a rock fin, e.g. a volcanically formed dike, or a mountain, may be more lasting. A bifurcation may also be man-made, for example when two streams are separated by a long bridge pier.