Robert Louis "Bob" Behnken (born July 28, 1970 in Creve Coeur, Missouri) is a United States Air Force officer, NASA astronaut and former Chief of the Astronaut Office. Behnken holds a Ph.D in Mechanical Engineering and has reached the rank of Colonel in the U.S. Air Force. Bob Behnken has logged over 1,000 flight hours in 25 different aircraft. He flew aboard Space Shuttle missions STS-123 and STS-130 as a Mission Specialist, accumulating over 378 hours in space, including 19 hours of spacewalk time. Behnken was also assigned as Mission Specialist 1 to the STS-400 rescue mission. He is married to fellow astronaut K. Megan McArthur.[1]

Prior to entering graduate school, Behnken was an Air Force ROTC student at Washington University in St. Louis, and after graduate school was assigned to enter Air Force active duty at Eglin AFB, Florida. While at Eglin, he worked as a technical manager and developmental engineer for new munitions systems. Behnken was next assigned to attend the U.S. Air Force Test Pilot School Flight Test Engineer's course at Edwards AFB, California. After graduating, he was assigned to the F-22 Combined Test Force (CTF) and remained at Edwards. While assigned to the F-22 program, Behnken was the lead flight test engineer for Raptor 4004 and a special projects test director. These responsibilities included flight test sortie planning, control room configuration development, and test conduct. Behnken also flew in both the F-15 and F-16 aircraft in support of the F-22 flight test program.[2]

Behnken has over 780 flight hours in more than 25 different aircraft types. 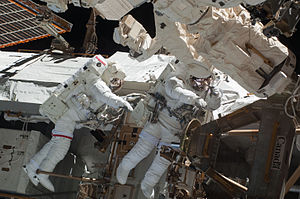 Selected as an astronaut candidate by NASA in July 2000, Behnken reported for training in August 2000. Following the completion of 18 months of training and evaluation, he was assigned technical duties in the Astronaut Office Shuttle Operations Branch supporting launch and landing operations at Kennedy Space Center, Florida.

In September 2006, Behnken served as an aquanaut during the NEEMO 11 mission aboard the Aquarius underwater laboratory, living and working underwater for seven days.[3]

Behnken was a crew member of the STS-123 mission that delivered the Japanese Experiment Module and the Special Purpose Dexterous Manipulator to the International Space Station in March 2008.[2] Behnken took part in three spacewalks during the mission.

Behnken also flew as a Mission Specialist on STS-130, which launched at 04:14 EST (09:14 UTC) 8 February 2010. This mission delivered the Tranquility module and Cupola to the International Space Station. Behnken again took part in three spacewalks during this mission.[4]

In July 2012, Behnken was named Chief of the Astronaut Office, succeeding Peggy Whitson. He held the job until July 2015, when he was succeeded by Chris Cassidy, after being selected as one of four astronauts training to fly spacecraft contracted under NASA's Commercial Crew Program.[5]

This article incorporates text in the public domain from the National Aeronautics and Space Administration.