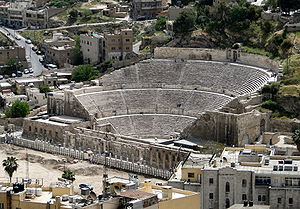 Roman theaters derive from and are part of the overall evolution of earlier Greek theaters. Indeed, much of the architectural influence on the Romans came from the Greeks, and theatre structural design was no different from other buildings. However, Roman theatres have specific differences, such as being built upon their own foundations instead of earthen works or a hillside and being completely enclosed on all sides. 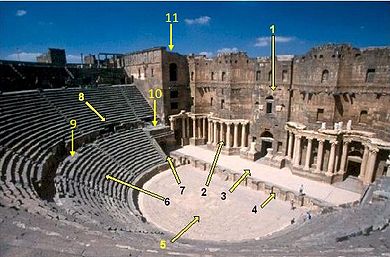 Roman theatres were built in all areas of the empire from Spain to the Middle East. Because of the Romans' ability to influence local architecture, we see numerous theatres around the world with uniquely Roman attributes.[1]

There exist similarities between the theatres and amphitheatres of ancient Rome/Italy. They were constructed out of the same material, Roman concrete, and provided a place for the public to go and see numerous events throughout the Empire. However, they are two entirely different structures, with specific layouts that lend to the different events they held. Amphitheatres did not need superior acoustics, unlike those provided by the structure of a Roman theatre. While amphitheatres would feature races and gladiatorial events, theatres hosted events such as plays, pantomimes, choral events, and orations. Their design, with its semicircular form, enhances the natural acoustics, unlike Roman amphitheatres constructed in the round.[1]

These buildings were semi-circular and possessed certain inherent architectural structures, with minor differences depending on the region in which they were constructed. The scaenae frons was a high back wall of the stage floor, supported by columns. The proscaenium was a wall that supported the front edge of the stage with ornately decorated niches off to the sides. The Hellenistic influence is seen through the use of the proscaenium. The Roman theatre also had a podium, which sometimes supported the columns of the scaenae frons. The scaenae was originally not part of the building itself, constructed only to provide sufficient background for the actors. Eventually, it became a part of the edifice itself, made out of concrete. The theatre itself was divided into the stage (orchestra) and the seating section (auditorium). Vomitoria or entrances and exits were made available to the audience.[2]

The auditorium, the area in which people gathered, was sometimes constructed on a small hill or slope in which stacked seating could be easily made in the tradition of the Greek Theatres. The central part of the auditorium was hollowed out of a hill or slope, while the outer radian seats required structural support and solid retaining walls. This was of course not always the case as Romans tended to build their theatres regardless of the availability of hillsides. All theatres built within the city of Rome were completely man-made without the use of earthworks. The auditorium was not roofed; rather, awnings (vela) could be pulled overhead to provide shelter from rain or sunlight.[3]

Some Roman theatres, constructed of wood, were torn down after the festival for which they were erected concluded. This practice was due to a moratorium on permanent theatre structures that lasted until 55 BC when the Theatre of Pompey was built with the addition of a temple to avoid the law. Some Roman theatres show signs of never having been completed in the first place.[4]

Inside Rome, few theatres have survived the centuries following their construction, providing little evidence about the specific theatres. Arausio, the theatre in modern-day Orange, France, is a good example of a classic Roman theatre, with an indented scaenae frons, reminiscent of Western Roman theatre designs, however missing the more ornamental structure. The Arausio is still standing today and, with its amazing structural acoustics and having had its seating reconstructed, can be seen to be a marvel of Roman architecture.[3]