The romanization of Japanese is the application of the Latin script to write the Japanese language.[1] This method of writing is sometimes referred to in English as rōmaji (ローマ字?, literally, "roman letters") (Japanese pronunciation: [ɽóːmadʑi]

Japanese is normally written in a combination of logographic characters borrowed from Chinese (kanji) and syllabic scripts (kana) which also ultimately derive from Chinese characters. Rōmaji may be used in any context where Japanese text is targeted at non-Japanese speakers who cannot read kanji or kana, such as for names on street signs and passports, and in dictionaries and textbooks for foreign learners of the language. It is also used to transliterate Japanese terms in text written in English (or other languages that use the Latin script) on topics related to Japan, such as linguistics, literature, history, and culture. Rōmaji is the most common way to input Japanese into word processors and computers, and may also be used to display Japanese on devices that do not support the display of Japanese characters.

All Japanese who have attended elementary school since World War II have been taught to read and write romanized Japanese. Therefore, almost all Japanese are able to read and write Japanese using rōmaji, although it is extremely rare in Japan to use this method to write Japanese (except as an input tool on a computer or for special purposes like in some logo design), and most Japanese are more comfortable reading kanji/kana.

The word rōmaji literally means "roman letters", and in Japan it is more often used to refer to the Latin alphabet itself (as used in English and other European languages) than to any specific form of romanized Japanese.[citation needed]

The earliest Japanese romanization system was based on the Portuguese orthography. It was developed around 1548 by a Japanese Catholic named Yajiro. Jesuit presses used the system in a series of printed Catholic books so that missionaries could preach and teach their converts without learning to read Japanese orthography. The most useful of these books for the study of early modern Japanese pronunciation and early attempts at romanization was the Nippo jisho, a Japanese-Portuguese dictionary written in 1603. In general, the early Portuguese system was similar to Nihon-shiki in its treatment of vowels. Some consonants were transliterated differently: for instance, the /k/ consonant was rendered, depending on context, as either c or q, and the /ɸ/ consonant (now pronounced /h/) as f, so Nihon no kotoba ("The language of Japan") was spelled Nifon no cotoba. The Jesuits also printed some secular books in romanized Japanese, including the first printed edition of the Japanese classic The Tale of the Heike, romanized as Feiqe no monogatari, and a collection of Aesop's Fables (romanized as Esopo no fabulas). The latter continued to be printed and read after the suppression of Christianity in Japan (Chibbett, 1977).

Following the expulsion of Christians from Japan in the late 1590s and early 17th century, rōmaji fell out of use, and was only used sporadically in foreign texts until the mid-19th century, when Japan opened up again. The systems used today all developed in the latter half of the 19th century.[citation needed]

From the mid-19th century several systems were developed, culminating in the Hepburn system, named after James Curtis Hepburn who used it in the third edition of his Japanese–English dictionary, published in 1887. The Hepburn system included representation of some sounds that have since changed. For example, Lafcadio Hearn's book Kwaidan shows the older kw- pronunciation; in modern Hepburn romanization, this would be written Kaidan (lit., ghost tales.)[citation needed]

As a replacement for Japanese writing system

In the Meiji era (1868–1912), some Japanese scholars advocated abolishing the Japanese writing system entirely and using rōmaji instead. The Nihon-shiki romanization was an outgrowth of that movement. Several Japanese texts were published entirely in rōmaji during this period, but it failed to catch on. Later, in the early 20th century, some scholars devised syllabary systems with characters derived from Latin (rather like the Cherokee syllabary); these were even less popular, because they were not based on any historical use of the Latin script. Today, the use of Nihon-shiki for writing Japanese is advocated by the Oomoto sect[2] and some independent organizations.[3] 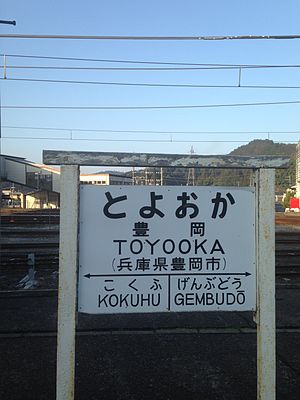 Hepburn romanization generally follows English phonology with Romance vowels. It is an intuitive method of showing Anglophones the pronunciation of a word in Japanese. It was standardized in the USA as American National Standard System for the Romanization of Japanese (Modified Hepburn), but that status was abolished on October 6, 1994. Hepburn is the most common romanization system in use today, especially in the English-speaking world.

The Revised Hepburn system of romanization uses a macron to indicate some long vowels and an apostrophe to note the separation of easily confused phonemes (usually, syllabic n ん from a following naked vowel or semivowel). For example, the name じゅんいちろう, is written with the kana characters ju-n-i-chi-ro-u, and romanized as Jun'ichirō in Revised Hepburn. Without the apostrophe, it would not be possible to distinguish this correct reading from the incorrect ju-ni-chi-ro-u. This system is widely used in Japan and among foreign students and academics.

Nihon-shiki romanization, which predates the Hepburn system, was originally invented as a method for the Japanese to write their own language in Latin characters. It follows the Japanese syllabary very strictly, with no adjustments for changes in pronunciation. It is therefore the only major system of romanization that allows (almost) lossless mapping to and from kana. It has also been standardized as ISO 3602 Strict. Also known as Nippon-shiki, rendered in the Nihon-shiki style of romanization the name is either Nihon-siki or Nippon-siki.

Kunrei-shiki romanization is a slightly modified version of Nihon-shiki which eliminates differences between the kana syllabary and modern pronunciation. For example, when the words kana かな and tsukai つかい are combined, the result is written in kana as かなづかい with a dakuten (voicing sign) ゛on the つ (tsu) kana to indicate that the tsu つ is now voiced. The づ kana is pronounced in the same way as a different kana, す (su), with dakuten, ず. Kunrei-shiki and Hepburn ignore the difference in kana and represent the sound in the same way, as kanazukai, using the same letters "zu" as are used to romanize ず. Nihon-shiki retains the difference, and romanizes the word as kanadukai, differentiating the づ kana from the ず kana, which is romanized as zu, even though they are pronounced identically in most dialects and in standard Japanese. Similarly for the pair じ and ぢ, which are both zi in Kunrei-shiki and both ji in Hepburn romanization, but are zi and di respectively in Nihon-shiki. See the table below for full details.

Kunrei-shiki has been standardized by the Japanese Government and the International Organisation for Standardisation as ISO 3602. Kunrei-shiki is taught to Japanese elementary school students in their fourth year of education.

Written in Kunrei-shiki, the name of the system would be rendered Kunreisiki.

It is possible to elaborate these romanizations to enable non-native speakers to pronounce Japanese words more correctly. Typical additions include tone marks to note the Japanese pitch accent and diacritic marks to distinguish phonological changes, such as the assimilation of the moraic nasal /n/ (see Japanese phonology).

JSL is a romanization system based on Japanese phonology, designed using the linguistic principles used by linguists in designing writing systems for languages that do not have any. It is a purely phonemic system, using exactly one symbol for each phoneme, and marking pitch accent using diacritics. It was created for Eleanor Harz Jorden's system of Japanese language teaching. Its principle is that such a system enables students to better internalize the phonology of Japanese. Since it does not have any of the advantages for non-native speakers that the other rōmaji systems have, and the Japanese already have a writing system for their language, JSL is not widely used outside the educational environment.

In addition to the standardized systems above, there are many variations in romanization, used either for simplification, in error or confusion between different systems, or for deliberate stylistic reasons.

Notably, the various mappings that Japanese input methods use to convert keystrokes on a Roman keyboard to kana often combine features of all of the systems; when used as plain text rather than being converted, these are usually known as wāpuro rōmaji. (Wāpuro is a blend of wādo purosessā word processor.) Unlike the standard systems, wāpuro rōmaji requires no characters from outside the ASCII character set.

While there may be arguments in favour of some of these variant romanizations in specific contexts, their use, especially if mixed, leads to confusion when romanized Japanese words are indexed. Note that this confusion never occurs when inputting Japanese characters with a word processor, because input Latin letters are transliterated into Japanese kana as soon as the IME processes what character is input.

In addition, the following three "non-Hepburn rōmaji" (非ヘボン式ローマ字, hi-hebon-shiki rōmaji?) methods of representing long vowels are authorized by the Japanese Foreign Ministry for use in passports.[4]

This chart shows in full the three main systems for the romanization of Japanese: Hepburn, Nihon-shiki and Kunrei-shiki:

This chart shows the significant differences among them.

Japanese is written without spaces between words, and in some cases, such as concatenated compounds, it may not be completely clear where "word" boundaries ought to lie, resulting in varying romanization styles. For example, 結婚する, meaning "to marry", and composed of the noun 結婚 (kekkon, "marriage") combined with する (suru, "to do"), is romanised as kekkonsuru by some authors but kekkon suru by others.

Kana without standardised forms of romanization

There is no universally accepted style of romanization for the smaller versions of the y kana (ゃ/ャ, ゅ/ュ and ょ/ョ) when used outside the normal combinations (きゃ, きょ etc.), nor for the sokuon or small tsu kana っ/ッ when it is not directly followed by a consonant. Although these are usually regarded as merely phonetic marks or diacritics, they do sometimes appear on their own, such as at the end of sentences, in exclamations, or in some names. The detached sokuon is sometimes represented as an apostrophe or as t; for example, あっ might be written as a' or at.[citation needed]

The list below shows the Japanese reading of letters, for spelling out words, or in acronyms. For example, NHK is read enu-eichi-kei (エヌ・エイチ・ケイ?). These are the standard names, based on the British English letter names (so Z is from zed, not zee), but in specialized circumstances names from other languages may also be used. For example, musical keys are often referred to by the German names, so that B♭ is called bē (べー?) from German B.