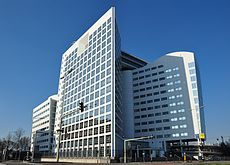 Headquarters of the International Criminal Court in The Hague

The Rome Statute established four core international crimes: genocide, crimes against humanity, war crimes, and the crime of aggression. Those crimes "shall not be subject to any statute of limitations".[7] Under the Rome Statute, the ICC can only investigate and prosecute the four core international crimes in situations where states are "unable" or "unwilling" to do so themselves. The court has jurisdiction over crimes only if they are committed in the territory of a state party or if they are committed by a national of a state party; an exception to this rule is that the ICC may also have jurisdiction over crimes if its jurisdiction is authorized by the United Nations Security Council.

The Rome Statute established four core international crimes: genocide, crimes against humanity, war crimes and the crime of aggression. Following years of negotiation, aimed at establishing a permanent international tribunal to prosecute individuals accused of genocide and other serious international crimes, such as crimes against humanity, war crimes and crimes of aggression, the United Nations General Assembly convened a five-week diplomatic conference in Rome in June 1998 "to finalize and adopt a convention on the establishment of an international criminal court".[8][9] On 17 July 1998, the Rome Statute was adopted by a vote of 120 to 7, with 21 countries abstaining.[5] Because the way each delegation voted was officially unrecorded, there is some dispute over the identity of the seven countries that voted against the treaty.[10] It is certain that the People's Republic of China, Israel, and the United States were three of the seven because they have publicly confirmed their negative votes; India, Indonesia, Iraq, Libya, Qatar, Russia, Saudi Arabia, Sudan, and Yemen have been identified by various observers and commentators as possible sources for the other four negative votes, with Iraq, Libya, Qatar, and Yemen being the four most commonly identified.[10]

On 11 April 2002, ten countries ratified the statute at the same time at a special ceremony held at the United Nations headquarters in New York City,[11] bringing the total number of signatories to sixty, which was the minimum number required to bring the statute into force, as defined in Article 126.[3] The treaty entered into force on 1 July 2002;[11] the ICC can only prosecute crimes committed on or after that date.[12] The statute was modified in 2010 after the Review Conference in Kampala, Uganda, but the amendments to the statute that were adopted at that time are not effective yet.

The Rome Statute is the result of multiple attempts for the creation of a supranational and international tribunal. At the end of 19th century, the international community took the first steps towards the institution of permanent courts with supranational jurisdiction. With the Hague International Peace Conferences, representatives of the most powerful nations made an attempt to harmonize laws of war and to limit the use of technologically advanced weapons. After World War I and even more after the heinous crimes committed during World War II, it became a priority to prosecute individuals responsible for crimes so serious that needed to be called "against humanity". In order to re-affirm basic principles of democratic civilisation, the alleged criminals were not executed in public squares or sent to torture camps, but instead treated as criminals: with a regular trial, the right to defense and the presumption of innocence. The Nuremberg trials marked a crucial moment in legal history, and after that, some treaties that led to the drafting of the Rome Statute were signed.

UN General Assembly Resolution n. 260 9 December 1948, the Convention on the Prevention and Punishment of the Crime of Genocide, was the first step towards the establishment of an international permanent criminal tribunal with jurisdiction on crimes yet to be defined in international treaties. In the resolution there was a hope for an effort from the Legal UN commission in that direction. The General Assembly, after the considerations expressed from the commission, established a committee to draft a statute and study the related legal issues. In 1951 a first draft was presented; a second followed in 1955[citation needed] but there were a number of delays, officially due to the difficulties in the definition of the crime of aggression, that were only solved with diplomatic assemblies in the years following the statute's coming into force. The geopolitical tensions of the Cold War also contributed to the delays.

Trinidad and Tobago asked the General Assembly in December 1989 to re-open the talks for the establishment of an international criminal court and in 1994 presented a draft Statute. The General Assembly created an ad hoc committee for the International Criminal Court and, after hearing the conclusions, a Preparatory Committee that worked for two years (1996–1998) on the draft. Meanwhile, the United Nations created the ad hoc tribunals for the former Yugoslavia (ICTY) and for Rwanda (ICTR) using statutes—and amendments due to issues raised during pre-trial or trial stages of the proceedings—that are quite similar to the Rome Statute.

During its 52nd session the UN General Assembly decided to convene a diplomatic conference for the establishment of the International Criminal Court, held in Rome 15 June–17 July 1998 to define the treaty, entered into force on 1 July 2002. This Rome Conference was attended by representatives from 161 member states, along with observers from various other organizations, intergovernmental organizations and agencies, and non-governmental organizations (including many human rights groups) and was held at the headquarters of the Food and Agriculture Organization of the United Nations, located about 4 km away from the Vatican (one of the states represented).[13][14]

Main article: States parties to the Rome Statute of the International Criminal Court

As of March 2016[update], 124 states[15] are parties to the Statute of the Court, including all the countries of South America, nearly all of Europe, most of Oceania and roughly half of Africa.[2] A further 31 countries[15] have signed but not ratified the Rome Statute.[2] The law of treaties obliges these states to refrain from "acts which would defeat the object and purpose" of the treaty until they declare they do not intend to become a party to the treaty.[16] Three signatory states—Israel, Sudan and the United States—have informed the UN Secretary General that they no longer intend to become states parties and, as such, have no legal obligations arising from their former representatives' signature of the Statute.[2][17] 41 United Nations member states[15] have neither signed nor acceded to the Rome Statute; some of them, including China and India, are critical of the Court.[18][19] Ukraine, a non-ratifying signatory, has accepted the Court's jurisdiction for a period starting in 2013.[20]

Any amendment to the list of crimes within the jurisdiction of the court will only apply to those states parties that have ratified it. It does not need a seven-eighths majority of ratifications.[21]

The states parties held a Review Conference in Kampala, Uganda from 31 May to 11 June 2010.[22] The Review Conference adopted a definition of the crime of aggression, thereby allowing the ICC to exercise jurisdiction over the crime for the first time. It also adopted an expansion of the list of war crimes.[23]