Rose Elizabeth Fitzgerald Kennedy (July 22, 1890 – January 22, 1995) was an American philanthropist and socialite. She was deeply embedded in the "lace curtain" Irish Catholic community in Boston, where her father was mayor. She was the wife of businessman and investor Joseph P. Kennedy Sr., who was United States Ambassador to the Court of St James's. Their nine children included President John F. Kennedy, Senator Robert F. Kennedy, and longtime Senator Ted Kennedy.

Rose was born at 4 Garden Court[2] in the North End neighborhood of Boston, Massachusetts. She was the eldest of six children born to Boston Mayor John Francis "Honey Fitz" Fitzgerald (1863–1950) and Mary Josephine "Josie" Hannon (1865–1964).[3] Her siblings were Mary, Thomas, John Jr., Eunice, and Frederick.

As a young child, she lived in an Italianate/Mansard-style home in the Ashmont Hill section of Dorchester, Massachusetts and attended the local Girl's Latin School. The home later burned down, but a plaque at Welles Avenue and Harley Street proclaims "Rose Fitzgerald Kennedy Square". The plaque was dedicated by her son, Senator Ted Kennedy, on her 102nd birthday in 1992.

Kennedy studied at the convent school Kasteel Bloemendal in Vaals, The Netherlands, and graduated from Dorchester High School in 1906. She also attended the New England Conservatory in Boston where she studied piano. After being refused permission by her father to attend Wellesley College, Fitzgerald enrolled at the Manhattanville College of the Sacred Heart (as it was then known) in Manhattan, an institution that did not grant degrees at the time. In 1908, Fitzgerald and her father embarked on a tour of Europe. She and Honey Fitz had a private audience with Pope St. Pius X at the Vatican.

On October 7, 1914, she married Joseph Patrick "Joe" Kennedy at age 24 after a courtship of more than seven years. He was the elder son of businessman/politician P. J. Kennedy (political rival of Honey Fitz) and Mary Augusta Hickey. She gave birth to the couple's first child, Joseph Jr., nine months later. They initially lived in a home in Brookline, Massachusetts that is now the John Fitzgerald Kennedy National Historic Site, and later a 15-room vacation home at Hyannis Port on Cape Cod, which became the Kennedy family’s lasting base. They had nine children. 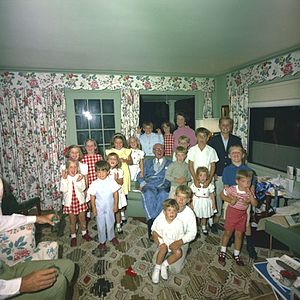 Kennedy (standing, rear) with her husband Joseph P. Kennedy Sr. and grandchildren, 1963. John-John can be seen in the foreground.

Joseph provided well for their family, but was unfaithful. His affairs included one with Gloria Swanson. While eight months pregnant with the couple's fourth child Kathleen, Rose temporarily went back to her parents, but returned to Joseph. In turning a blind eye to her husband's affairs, Rose depended heavily on medication. Ronald Kessler found records for prescription tranquilizers Seconal, Placidyl, Librium, and Dalmane to relieve Rose's nervousness and stress, and Lomotil, Bentyl, Librax, and Tagamet for her stomach.[4]

Rose Kennedy was a strict Catholic throughout her life. Even after her 100th birthday, she rarely missed Sunday Mass and maintained an "extremely prudish" exterior. Her strict beliefs often placed her at odds with her children.[5] Jacqueline Kennedy described her mother-in-law in her correspondence to Father Joseph Leonard, an Irish priest: "I don't think Jack's mother is too bright – and she would rather say a rosary than read a book."[6]

Rose Kennedy stated that she felt completely fulfilled as a full-time homemaker. In her 1974 autobiography, Times to Remember, she wrote, "I looked on child rearing not only as a work of love and a duty, but as a profession that was fully as interesting and challenging as any honorable profession in the world and one that demanded the best I could bring to it..... What greater aspiration and challenge are there for a mother than the hope of raising a great son or daughter?"[5] 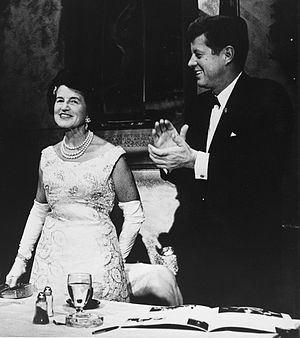 Rose Kennedy with her son, President John F. Kennedy in 1962

After her son John became President in 1961, Rose "became a sort of quiet celebrity," appearing on the International Best Dressed List.[5] Most of her social activities consisted of involvement in charities and women’s groups. Rose also took brisk ocean swims outside her Cape Cod house in fifty-degree weather.

After suffering a stroke in 1984, she used a wheelchair for the remaining eleven years of her life. She maintained her residence at the Kennedy Compound in Hyannis Port, Massachusetts and was cared for by private nurses and staff.

On January 22, 1995, Kennedy died at the Kennedy family compound in Hyannis Port from complications from pneumonia at the age of 104, having outlived her husband by a quarter of a century. She was survived by five children, 26 grandchildren, and 42 great-grandchildren. Rose Kennedy was interred with her husband at Holyhood Cemetery in Brookline, Massachusetts.

In 1951, Pope Pius XII granted Kennedy the title of countess in recognition of her "exemplary motherhood and many charitable works." [7] In 1992, when she turned 102, the intersection of Welles Avenue and Harley Street in Boston was proclaimed "Rose Fitzgerald Kennedy Square". The plaque was dedicated by her son, Senator Edward M. Kennedy. Also, the Rose Kennedy Greenway in Boston, Massachusetts – the park that was created when the city's Central Artery was sunk below ground level in the "Big Dig" – was named after her on July 26, 2004.[citation needed] Well known for her philanthropic efforts and for leading the Grandparents' Parade at age 90 at the Special Olympics, Kennedy's life and work are documented in the Oscar-nominated short documentary Rose Kennedy: A Life to Remember.[8]