Route of the Castles of Vinalopó 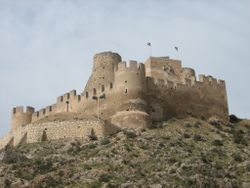 The route, which is located in the Valley of Vinalopó, in the inside mountains of the province of Alicante, unveiled a series of castles and forts that protected them during the Middle Ages, when these populations, at some point in its history, where lands of border between the Kingdom of Valencia and the Kingdom of Castile.

The route has with around 75 kilometres through nine different municipalities. It's located in one of the regions of the Valencian Community and Spain with more concentration of castles, which are in various locations such as Villena, Biar, Banyeres de Mariola, Castalla, Sax, Elda, Petrer or Novelda.

The Vinalopó Valley is dotted with castles and fortifications. It is heritage of the Arab era. The Arabic culture first, and then the Christian, left in these lands a heritage of architectural value.

The Route of the Castles of Vinalopó the following itinerary, by order: