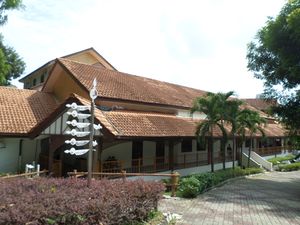 To accommodate the growing number of artifacts, Police Inspector-General Tun Mohammed Hanif Omar first proposed moving the museum to a new location in Kuala Lumpur on 16 October 1983. Construction on the site began on 18 February 1993 and was finished after four years, at a cost of 4.9 million ringgit for construction and 2.9 million ringgit for interior design. Deputy Prime Minister Dato' Seri Abdullah Ahmad Badawi unveiled the grand opening of the new museum site in July 1998.

The Royal Malaysia Police Museum is divided into three lettered galleries. Gallery A is dedicated to the colonial police, and displays old police uniforms and equipment. Gallery B showcases the history of the police force's vehicles as well as unusual evidence from past cases, including from investigations into triads, secret societies, and communists.[1] The final gallery, Gallery C, is dedicated to the role of the Royal Malaysia Police during specific historical periods, including the Japanese occupation during WWII and the Bukit Kepong Incident during the communist insurgency.[2]

The museum is accessible within walking distance west of Kuala Lumpur railway station.