Ruby Nell Bridges Hall (born September 8, 1954) is an American activist known for being the first black child to attend an all-white elementary school in Louisiana during the 20th century.[1] She attended William Frantz Elementary School.[2][3]

Ruby Bridges was born in Tylertown, Mississippi, to Abon and Lucille Bridges. When she was 4 years old, the family relocated to New Orleans, Louisiana. In 1960, when she was 6 years old, her parents responded to a request from the National Association for the Advancement of Colored People (NAACP) and volunteered her to participate in the integration of the New Orleans school system, even though her father was hesitant.

In spring of 1960, Bridges was one of six black children in New Orleans to pass the test that determined whether they could go to the all-white school. Two of the six decided to stay at their old school, three were transferred to McDonogh, and Bridges went to a school by herself. 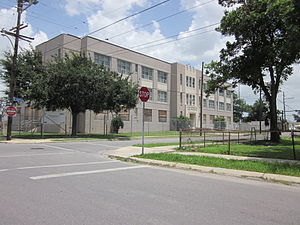 Ruby was the only one assigned to William Frantz. Her father was initially reluctant, but her mother felt strongly that the move was needed not only to give her own daughter a better education, but to "take this step forward ... for all African-American children." Her mother finally convinced her father to let her go to the school.[4]

The court-ordered first day of integrated schools in New Orleans, November 14, 1960, was commemorated by Norman Rockwell in the painting The Problem We All Live With (published in Look magazine on January 14, 1964).[5] As Bridges describes it, "Driving up I could see the crowd, but living in New Orleans, I actually thought it was Mardi Gras. There was a large crowd of people outside of the school. They were throwing things and shouting, and that sort of goes on in New Orleans at Mardi Gras."[5] Former United States Deputy Marshal Charles Burks later recalled, "She showed a lot of courage. She never cried. She didn't whimper. She just marched along like a little soldier, and we're all very very proud of her."[6] 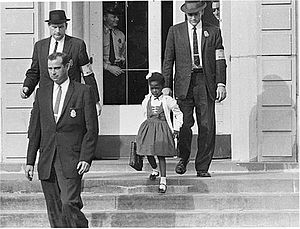 U.S. Marshals escorted Bridges to and from school

As soon as Bridges entered the school, white parents pulled their own children out; all the teachers refused to teach while a black child was enrolled. Only one person agreed to teach Ruby and that was Barbara Henry, from Boston, Massachusetts, and for over a year Henry taught her alone, "as if she were teaching a whole class."

That first day, Bridges and her adult companions spent the entire day in the principal's office; the chaos of the school prevented their moving to the classroom until the second day. On the second day, however, a white student broke the boycott and entered the school when a 34-year-old Methodist minister, Lloyd Anderson Foreman, walked his 5 year old daughter Pam through the angry mob, saying, "I simply want the privilege of taking my child to school...." A few days later, other white parents began bringing their children, and the protests began to subside.[2][7] Every morning, as Bridges walked to school, one woman would threaten to poison her;[8] because of this, the U.S. Marshals dispatched by President Eisenhower, who were overseeing her safety, allowed Ruby to eat only the food that she brought from home.

Another woman at the school put a black baby doll in a wooden coffin and protested with it outside the school, a sight that Bridges Hall has said "scared me more than the nasty things people screamed at us." At her mother's suggestion, Bridges began to pray on the way to school, which she found provided protection from the comments yelled at her on the daily walks.[9]

Child psychiatrist Robert Coles volunteered to provide counseling to Bridges during her first year at Frantz. He met with her weekly in the Bridges home, later writing a children's book, The Story of Ruby Bridges, to acquaint other children with Bridges' story.

The Bridges family suffered for their decision to send her to William Frantz Elementary: her father lost his job, the grocery store the family shopped at would no longer let them shop there, and her grandparents, who were sharecroppers in Mississippi, were turned off their land. She has noted that many others in the community, both black and white, showed support in a variety of ways. Some white families continued to send their children to Frantz despite the protests, a neighbor provided her father with a new job, and local people babysat, watched the house as protectors, and walked behind the federal marshals' car on the trips to school.[5][10] 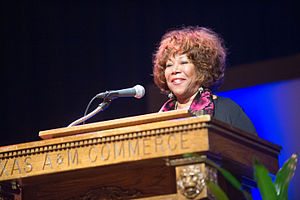 Bridges, now Ruby Bridges Hall, still lives in New Orleans with her husband, Malcolm Hall, and their four sons.[11] For 15 years Hall worked as a travel agent, later becoming a full-time parent. She is now chair of the Ruby Bridges Foundation, which she formed in 1999 to promote "the values of tolerance, respect, and appreciation of all differences." Describing the mission of the group, she says, "racism is a grown-up disease and we must stop using our children to spread it."[12]

In 1993, Bridges Hall began looking after her recently orphaned nieces, then attending William Frantz Elementary as their aunt had before them. She began to volunteer as a parent liaison three days a week. Eventually, publicity related to Coles' book caused reporters to locate Bridges Hall and write stories about her volunteer work at the school, which in turn led to a reunion with her former teacher, Barbara Henry. Henry and Bridges Hall now sometimes make joint appearances in schools in connection with the Bridges Foundation.[13]

Like hundreds of thousands of others in the greater New Orleans area, Bridges Hall lost her home (in Eastern New Orleans) to the catastrophic flooding in the failure of the levee system during Hurricane Katrina in 2005.

In October 2006, the Alameda Unified School District dedicated a new elementary school to Ruby Bridges, and issued a proclamation in her honor.

In November 2006 she was honored in the Anti-Defamation League's Concert Against Hate.

In 2007 the Children's Museum of Indianapolis unveiled a new exhibit documenting her life, along with the lives of Anne Frank and Ryan White.

In 2010, she had a 50th year reunion at Frantz Elementary with Pam Foreman Testroet, who, at age five, was the first white child to break the boycott that ensued from Bridges' attendance at that school.[2] Bridges continues to tour as an inspirational speaker against racism. In 2011, she visited St. Paul's Episcopal School, a K-8 school in Oakland, CA. Her visit coincided with the unveiling of the Remember Them humanitarian monument by Mario Chiodo, which includes a sculpture of the young Ruby Bridges.

On July 15, 2011, Bridges met with President Barack Obama at the White House, and while viewing the Norman Rockwell painting of her on display he told her, "I think it's fair to say that if it hadn't been for you guys, I might not be here and we wouldn't be looking at this together."[15]

On May 19, 2012, Bridges Hall received an Honorary Degree from Tulane University at the annual graduation ceremony at the Superdome.

In 2014, a statue of Bridges was unveiled in the courtyard of William Frantz Elementary School.[16]