The RCWP-CPSU claims to have supported all the biggest occupations and strikes in Russia. It has links to the Russian trade union «Zashchita». It claims about 50,000 members as of 2007. The Revolutionary Communist Youth League (Bolshevik) (RCYL(b)), the youth organization of the RCWP-CPSU, is considered one of the most active communist youth organizations in Russia. 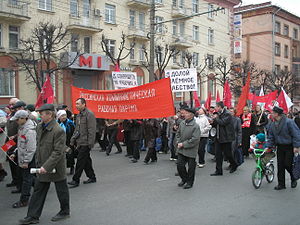 The block of RCWP-CPSU on 1st may demonstration in Izhevsk

In the 1999 Duma Election, the party won 2.2% of the total vote, getting 1,481,890 votes overall. The RCWP-CPSU considers the Communist Party of the Russian Federation (CPRF) to be reformist but for the occasion of the 2003 Duma Election the Party leaders decided to make an agreement with the CPRF in order not to disperse the communist vote.

In 2007, the party was de-registered by the Justice Ministry. In 2010, the RCWP-CPSU co-founded Russian registered political party Russian United Labour Front (ROT Front), led by Viktor Tyulkin. In April 2012, the party took its current name.