From Infogalactic: the planetary knowledge core
Jump to: navigation, search
File:Wikirutherford.jpg
Western side of Rutherford Crater, as seen by CTX camera (on Mars Reconnaissance Orbiter). Light-toned deposits are visible. 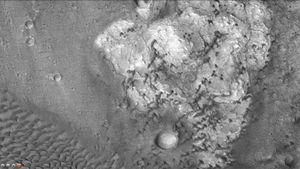 Dunes on floor of Rutherford Crater, as seen by CTX camera (on Mars Reconnaissance Orbiter). Note: this is an enlargement of the previous image.

Rutherford Crater is an impact crater in the Oxia Palus quadrangle on Mars at 19.2° N and 10.7° W. and is 110.5 km in diameter. Its name was approved in 1973, and it was named after Ernest Rutherford.[1] Some close up images of the crater show dunes and light-toned material. Light-toned rocks on Mars have been associated with hydrated minerals like sulfates. The Mars Rover Opportunity examined such layers close-up with several instruments. Scientists are excited about finding hydrated minerals such as sulfates and clays on Mars because they are usually formed in the presence of water.[2] Places that contain clays and/or other hydrated minerals would be good places to look for evidence of life.[3]