From Infogalactic: the planetary knowledge core
(Redirected from SAR-Lupe 3)
Jump to: navigation, search 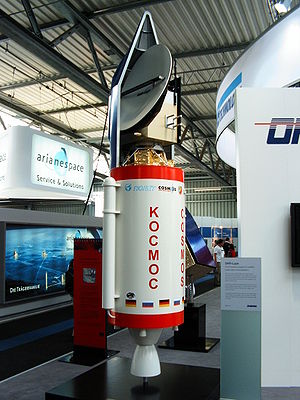 A model of a SAR-Lupe satellite on top of a Russian Cosmos-3M rocket.

SAR-Lupe is Germany's first reconnaissance satellite system and is used for military purposes. SAR is an abbreviation for synthetic aperture radar and "Lupe" is German for magnifying glass. The SAR-Lupe program consists of five identical (770 kg) satellites, developed by the German aeronautics company OHB-System which are controlled by a ground station[1] which is responsible for controlling the system and analysing the retrieved data. A large data archive of images will be kept in a former Cold War bunker belonging to the Kommando Strategische Aufklärung (Strategic Reconnaissance Command) of the Bundeswehr.

SAR-Lupe's "high-resolution" images can be acquired day or night through all weather conditions. The first satellite was launched from Plesetsk in Russia on 19 December 2006, about a year after the intended launch date; four more satellites were launched at roughly six-month intervals, and the entire system achieved full operational readiness on 22 July 2008.[2]

The five satellites operate in three 500-kilometre orbits in planes roughly sixty degrees apart. They use an X-band radar with a three-metre dish, providing a resolution of about 50 centimetres over a frame size of 5.5 km on a side ('spotlight mode', in which the satellite rotates to keep the dish pointed at a single target) or about one metre over a frame size of 8 km x 60 km ('stripmap mode', in which the satellite maintains a fixed orientation over the earth and the radar image is formed simply by the satellite's motion along its orbit). Response time for imaging of a given area is ten hours or less. Thales Alenia Space provided the core of the Synthetic Aperture Radar sensors.[3]

The testing of SAR-Lupe involved an inverse procedure, in which the satellite, mounted in a radome on Earth, was used to image the International Space Station, whose orbit is reasonably close to the one the satellite will eventually be in. One-metre resolution at the ISS was apparently achieved.

On 30 July 2002 a cooperation treaty between Germany and France was signed, under which the SAR-Lupe satellites and the French Helios optical reconnaissance satellite will operate jointly. Other EU countries have been invited to join as well and Italy has shown considerable interest.

A replacement of SAR-LUPE, called SARah, will be put into service from 2017-2019. It will consist of 3 radar satellites and one optical satellite. The satellites of SARah will be bigger and more capable than those of SAR-Lupe.[4]