It was the first flight of any SpaceX launch vehicle to a supersynchronous transfer orbit,[3] an orbit with a somewhat larger apogee than the more usual Geostationary transfer orbit (GTO) typically utilized for communication satellites.[4]

The SES-8 satellite is built on the GEOStar-2.4 satellite bus by Orbital Sciences.[5] It is the sixth satellite of that model to be built for SES.[6]

The commsat will be initially co-located at 95° East [7] with NSS-6 in order to provide communications bandwidth growth capacity in the Asia-Pacific region, specifically aimed at high-growth markets in South Asia and Indo-China, "as well as provide expansion capacity for DTH, VSAT and government applications."[6] [8] 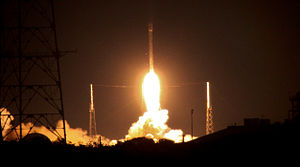 The launch was the second launch of the Falcon 9 v1.1 version of the rocket, a longer rocket with 60 percent more thrust than version 1.0 Falcon 9 vehicle,[9] and will be the first launch of the larger v1.1 rocket using the rebuilt erector structure at SpaceX' Cape Canaveral launch pad.[5] As a result, a number of systems on the launch vehicle will be being flown for only the second time, while several parts of the ground infrastructure at Cape Canaveral were used in a launch for the first time. These include:[10]

In order to maximize the propellant available for the launch of SES-8 into GTO, SpaceX did not attempt a controlled descent test of the first-stage booster as they did on the previous Falcon 9 v1.1 flight in September 2013.[12]

In the previous launch of the Falcon 9 v1.1—the first launch of the much larger version of the rocket with new Merlin 1D engines—on 29 September 2013, SpaceX was unsuccessful in reigniting the second stage Merlin 1D vacuum engine once the rocket had deployed its primary payload (CASSIOPE) and all of its nanosat secondary payloads.[13] The restart failure was determined to be frozen igniter fluid lines in the second-stage Merlin 1D engine. A minor redesign was done to address the problem by adding additional insulation to the lines.[3]

A second burn of the upper stage was required, and was completed successfully, during the SES-8 mission[14] in order to place the SES-8 telecommunications satellite into the highly elliptical supersynchronous orbit for satellite operator SES to effect a plane change and orbit circularization.[3][13]

The Falcon 9 upper stage used to launch SES-8 was left in a decaying elliptical low-Earth orbit which, by September 2014, had decayed and re-entered the atmosphere.[15]

Both stages of the Falcon 9 arrived at Cape Canaveral for processing before October 2, 2013, after both had trouble-free test firings at the SpaceX Rocket Development and Test Facility at McGregor, Texas.[6]

A launch attempt on 25 November 2013, with a planned liftoff at 22:37 UTC was scrubbed following a reported off-nominal condition in the liquid oxygen tank and supply lines of the first-stage booster that could not be resolved within the approximately one-hour launch window. A launch date of 28 November 2013 was announced, three days later, being the next opportunity for the launch site on Earth to be in alignment to achieve the target orbit.