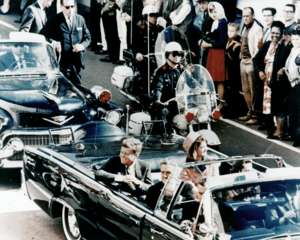 Picture of President Kennedy in the limousine in Dallas, Texas, on Main Street, minutes before the assassination. Also in the presidential limousine are Jackie Kennedy, Texas Governor John Connally, and his wife, Nellie.

SS-100-X was the U.S. Secret Service code name for the presidential limousine used by the 35th President of the United States, John F. Kennedy. The limousine is the one that Kennedy and First Lady Jacqueline Kennedy were passengers in when the President was assassinated in Dealey Plaza in Dallas, Texas on November 22, 1963.

Following Kennedy's assassination, the car received significant armor plating and a bullet-proof hardtop and was painted black. It resumed its role as a presidential limousine for President Lyndon Johnson until 1967 and remained in service until 1978, when it was sent to the Henry Ford Museum in Dearborn, Michigan.[1] 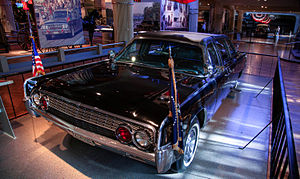 The car on display in the Henry Ford Museum

SS-100-X was originally a standard 1961 Lincoln Continental four door convertible (model 74A) built by the Ford Motor Company and assembled at the Wixom, Michigan plant. It had a retail price of $7,347.

The car was moved to the Experimental Garage at the Ford Proving Grounds where an additional 41 inches was added between the front and rear doors and just beyond the rear doors. The car's frame was strengthened to accommodate the additional length and weight. From there it was taken to Hess & Eisenhardt of Cincinnati, Ohio for reupholstering. During the refit the car had no bulletproof or bullet-resistant additions added. The windshield remained the standard two-ply safety glass windshield which could be easily replaced at any dealership.

An open car, the Lincoln was equipped with an assortment of tops, including a snap-together bubble top, a black cover for the bubble, a formal rear top and a stainless steel forward section (none of which were bulletproof). It also featured two-way radio telephones[1] and retractable steps and grab-handles for Secret Service agents. Although it was not armor-plated, the undercarriage and all suspension components were strengthened. A hydraulically-lifted rear seat was fitted. At the time of the assassination, the Lincoln had been fitted with a 1962-model front clip (fenders, hood, grille and bumper assemblies).

It had a special short-turn radius (61.9 feet, compared to 64 feet on the 1950 Eisenhower 'bubbletop' which had been its predecessor), which should have enabled its turning gracefully onto Elm Street in Dallas (although the 120-degree dogleg turn was supposed to have been forbidden by SS protocols). However, in the Zapruder film (full version, MPI Video) the car is seen to swing to the right in front of the Texas School Book Depository.

It was painted a special midnight blue color and modified to Secret Service specifications by Ford's Advanced Vehicles Group and Hess & Eisenhardt. Total cost of modifications was approximately $200,000. The limousine was registered to the Ford Motor Company and was leased to the Secret Service for a nominal fee of $500 per year.[2] 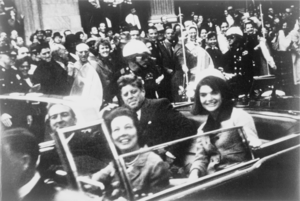 JFK, Jackie, and the Connallys in the presidential limousine seconds before his assassination

On 21 November 1963 SS-100-X was loaded onto a Fairchild C-123 Provider piloted by Captain Thomason of the 76th Air Transport Squadron and flown to San Antonio and then onto Dallas Love Field where it was stored in an underground car park.

Following the shooting of President Kennedy and Governor Connolly at approximately 12.30 pm, SS-100-X was driven to Parkland Memorial Hospital. The Plexiglas bubble top and cloth cover were then attached. Later that afternoon at 3.30 pm CST the limousine was taken to Love Field and boarded on a C-130 and flown to Andrews Air Force Base, Washington DC, landing at 8 pm EST. After arrival at Andrews AFB, the limo was delivered to the White House garage. The Secret Service and later the FBI took photos of the limo's interior and searched it for evidence before it was thoroughly cleaned and valeted.

In late December 1963, the car was sent back to Hess & Eisenhardt to be modified further, and was rebuilt from the ground up. For protection, the Lincoln received titanium armor plating, bullet-resistant glass and a bulletproof permanent roof. Solid aluminium rims were also fitted inside the tires to make them flat-proof. It remained in service for an additional eight years, logging 50,000 miles on the ground and over one million miles being flown to and from its destinations. The vehicle was equipped with Presidential lap robes and mouton carpeting and a complete communications system including radio patch to the White House. It was replaced in 1967 and remained in service doing less important duties until 1978, when it was retired to the Henry Ford Museum. Finished in Navy blue, the car was repainted after each assignment, however after the assassination it was repainted a more somber black (Johnson thought the blue would be too closely associated with the assassination).[4]