SSE plc (formerly Scottish and Southern Energy plc) is a British energy company headquartered in Perth, Scotland.[2][3] It is a constituent of the FTSE 100 Index.

SSE operates in Ireland and the United Kingdom. It is involved in the generation and supply of electricity and gas, the operation of gas and telecoms networks and other energy-related services such as gas storage, E&P, contracting, connections and metering.

It is considered as one of the Big Six, that dominate the energy market in the United Kingdom.

The company has its origins in two public sector electricity supply authorities. The former North of Scotland Hydro-Electric Board was founded in 1943 to design, construct and manage hydroelectricity projects in the Highlands of Scotland, and took over further generation and distribution responsibilities on the nationalisation of the UK's electricity industry in 1948. The former Southern Electricity Board was created in 1948 to distribute electricity in Southern England.

Whilst the Southern Electricity Board was a distribution-only authority, with no power generation capacity of its own, the North of Scotland Hydro-Electric board was a broader spectrum organisation, with its own generating capabilities. Because of its history and location, the Hydro-Electric Board was responsible for most of the UK's hydroelectric generating capacity.

In 2000, Scottish and Southern Energy acquired the SWALEC energy supply business.[4] In 2004 the Company acquired the Ferrybridge and Fiddlers Ferry Power Stations for £250million.[5] In 2008 it went on to buy Airtricity Holdings, an Irish wind farm business.[6] In 2009 it agreed to purchase Uskmouth power station from Welsh Power Group Limited.[7] In April 2010 the company purchased the natural gas exploration and production assets of Hess Corporation in three areas of the United Kingdom Continental Shelf - Everest/Lomond, Easington and Bacton.[8] 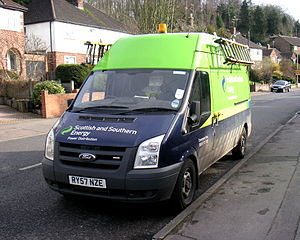 A Scottish and Southern Energy van, 2011.

SSE also has an equity interest of 50% in, and provides corporate and management services to Scotia Gas Networks, which owns Southern Gas Networks and Scotland Gas Networks. Its contracting business has five main areas of activity: industrial, commercial and domestic, mechanical and electrical contracting; data communications; high-voltage design and maintenance; electrical and instrumentation engineering, and public and highway lighting.

In March 2014, SSE withdrew investment in four major offshore wind farms. It plans to sell its stake in the Galloper wind farm and pull investment from the Islay, Dogger Bank and Firth of Forth wind farms. SSE blamed "limited subsidies and high costs".[11]

At 30 September 2013, SSE had an ownership interest in 9,553MW of thermal generation plant in Great Britain and Ireland, comprising (net):

SSE is the UK's largest officially-accredited Living Wage Employer. Nearly 20,000 staff across the UK are guaranteed to receive the living wage rate of at least £7.85 an hour. [12] SSE works closely with the Living Wage Foundation and was awarded the Living Wage Champion Award for Scotland in 2014.

In October 2014 SSE became the first FTSE 100 company to be awarded the Fair Tax Mark which is an independent accreditation process for identifying companies making an effort to be transparent about their tax affairs. [13]

The SSE Hydro is an arena located in Glasgow, Scotland, on the site of the Scottish Exhibition and Conference Centre (SECC). The arena officially opened on 30 September 2013 and has a capacity of 13,000. It was designed by the London-based architects Foster + Partners. The SSE Hydro hosts international musical stars, global entertainment and sporting events, with an aim to attract one million visitors each year.

The company also sponsors Wembley Arena in London and the SSE Arena (formerly known as the Odyssey Arena), part of the Odyssey Complex in Belfast.

SSE's main offices are located in Havant, Perth and Basingstoke