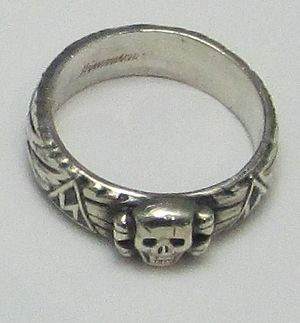 The SS-Ehrenring ("SS Honour Ring"), unofficially called Totenkopfring ("Skull Ring" or "Death's Head Ring"), was an award of Heinrich Himmler's Schutzstaffel (SS). It was not a state decoration, but rather a personal gift bestowed by Himmler. The SS Honor Sword and SS Honor Dagger were similar awards.

The ring was initially presented to senior officers of the Old Guard (of which there were fewer than 5,000) who had displayed extraordinary valor and leadership skill in battle. An additional requirement was a clean disciplinary record, and a subsequent blemish on it would require the wearer to return the ring. By 1939, disciplinary issues aside, it was available to any officer with 3 years service in the SS, and in World War II virtually the entire SS leadership, including the Waffen-SS and Gestapo, had the ring.

On 17 October 1944 production of the rings by Gahr & Co. of Munich was halted due to the increasing economic stresses of the final stages of the war. The rings were made by a die press then run through a design matrix. The skull was cast and soldered on later, with the recipient's name, the award date, and Himmler's signature engraved on the interior of each ring.

In addition every recipient got a standard letter from Himmler which described the meaning of the ring.

The name of the recipient and the conferment date was added on the letter. In the letter, Himmler wrote that the ring was a "reminder at all times to be willing to risk the life of our selves for the life of the whole".[1]

In 1938 Himmler ordered the return of all rings of dead SS-men and officers to be stored in a chest in Wewelsburg Castle. This was to symbolize the ongoing membership of the deceased in the SS-order. After all further awards of the ring were halted in 1944, Himmler ordered all the remaining rings, approximately 11,500, blast-sealed inside a hill near Wewelsburg[2]

The design of the ring reflects Himmler's interest in Germanic mysticism. Karl Maria Wiligut has been credited with the design.

The ring shows skull and crossed bones, crossing behind the skull - the SS symbol - on its top. The skull (or Totenkopf) was the traditional symbol of the SS, taken from other German and Prussian military units of the past.

The meaning of the skull described in Himmler's accompanying letter: "Der Totenkopf ist die Mahnung, jederzeit bereit zu sein, das Leben unseres Ichs einzusetzen für das Leben der Gesamtheit."[citation needed] which might be translated as "The skull is the reminder to be prepared at anytime to risk the life of our own ego for the life of the community."

Runes seen on the ring

The ring is wreathed with oak leaves.

On the inside of the ring was engraved S Lb for "Seinem Lieben" then the surname [only - no initials] of the bearer, date of presentation and a facsimile of Himmler's signature. Recipients also received a specially designed box decorated with the SS runes for storage or carrying. 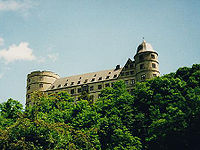 All rings were to be returned to Himmler upon the bearer's death or when they left the SS, to be kept at Wewelsburg as a kind of individual memorial to the holder. When a ring-holder was killed in battle, his SS comrades were to make every effort to retrieve the ring and prevent its falling into enemy hands. By January 1945, 64% of the 14,500 rings made had been returned to Himmler. After the end of the war, many rings were also (per Himmler's instructions) buried with the men who were awarded them.

Around 3,500 rings are thought to be in existence today, and therefore are very rare, collectable items. Copies and fakes are also common. There appears to be difficulty in verifying the authenticity of examples bearing the name "Müller","Maier" and "Weber" (three very common German surnames).