STS-37, the eighth flight of the Space Shuttle Atlantis, was a six-day mission with the primary objective of launching the Compton Gamma Ray Observatory (GRO), the second of the Great Observatories program which included the visible-spectrum Hubble Space Telescope, the Chandra X-ray Observatory and the infrared Spitzer Space Telescope.[1] The mission also featured two spacewalks, the first since 1985. 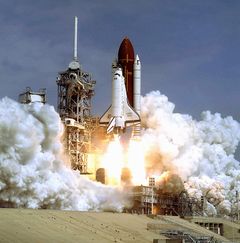 Launch of Atlantis on STS-37.

The STS-37 mission was successfully launched from launch pad 39B at 9:22:44AM EST on April 5, 1991 from the Kennedy Space Center in Florida. Resumption of the countdown after the T-9 minute hold was delayed about 4 minutes 45 seconds because of two possible weather-condition violations of the launch commit criteria (LCC). The first concerned the cloud ceiling being 500 feet less than the minimum of 8000 feet for a return-to-launch-site (RTLS) abort, and the second concerned the possible weather-condition (wind) effects on blast propagation. Both conditions were found acceptable and the launch countdown proceeded to a satisfactory launch to an inclination of 28.45 degrees.[3] Launch weight: 116,040 kilograms (255,820 lb).

The primary payload, the Gamma Ray Observatory (GRO), was deployed on flight day 3. GRO's high-gain antenna failed to deploy on command; it was finally freed and manually deployed by Ross and Apt during an unscheduled contingency space walk, the first since April 1985. The following day, the two astronauts performed the first scheduled space walk since November 1985 to test means for astronauts to move themselves and equipment about while maintaining the then-planned Space Station Freedom. GRO science instruments were Burst and Transient Source Experiment (BATSE), Imaging Compton Telescope (COMPTEL), Energetic Gamma Ray Experiment Telescope (EGRET) and Oriented Scintillation Spectrometer Experiment (OSSE). GRO was the second of NASA's four Great Observatories. The Hubble Space Telescope, deployed during Mission STS-31 in April 1990, was the first. GRO was launched on a two-year mission to search for the high-energy celestial gamma ray emissions, which cannot penetrate Earth's atmosphere. At about 35,000 pounds, GRO was the heaviest satellite to be deployed into low-Earth orbit from the Shuttle. It was also designed to be the first satellite that could be refueled in orbit by Shuttle crews. Five months after deployment, NASA renamed the satellite the Arthur Holly Compton Gamma Ray Observatory, or Compton Observatory, after the Nobel Prize-winning physicist who did important work in gamma ray astronomy. 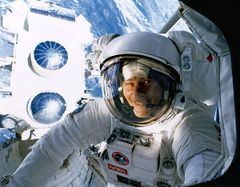 Ross during the first EVA; CGRO in the background 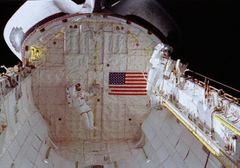 Ross and Apt during the second EVA

The first U.S. extravehicular activity (EVA) or spacewalk since 1985 was performed by Mission Specialists Jerry L. Ross and Jay Apt after six failed attempts to deploy the satellite's high-gain antenna. Repeated commands by ground controllers at the Payload Operations Control Center, Goddard Space Flight Center, Greenbelt, MD, and maneuvering of Atlantis and its Remote Manipulator System (RMS) robot arm, as well as GRO's antenna dish, were to no avail in dislodging the boom. Ross and Apt were prepared for such a contingency, and Ross freed the antenna boom within 17 minutes after beginning the spacewalk. It was the first unscheduled contingency EVA since STS-51-D in April 1985. Deployment occurred about 18:35 EST, approximately 4​1⁄2 hours after it was scheduled.

The following day, on 8 April 1991, Ross and Apt made the first scheduled EVA since Mission STS-61-B in November 1985. The spacewalk was to test methods of moving crew members and equipment around the future Space Station Freedom. One of the experiments was to evaluate manual, mechanical and electrical power methods of moving carts around the outside of large structures in space. Although all three methods worked, the astronauts reported that propelling the cart manually or hand-over-hand worked best. With both EVAs, Ross and Apt logged 10 hours and 49 minutes walking in space during STS-37. Crew members also reported success with secondary experiments.

During one of the EVAs, a small rod from within the spacesuit punctured the seal of one of the astronauts' gloves. However, the astronaut's hand partially sealed the hole, resulting in no detectable depressurization. In fact, the puncture was not noticed until after the spacewalkers were safely back inside Atlantis.[4] 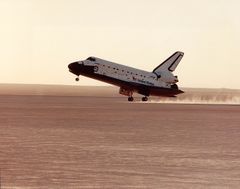 Atlantis touches down at Edwards.

Due to an incorrect call on winds aloft, Atlantis landed 623 feet short of the runway. This did not present a problem, since the orbiter landed on the dry lake bed of Edwards, and a problem was not obvious to most viewers. Had the landing been attempted at the Kennedy Space Center, the result would have been a touchdown on the paved underrun preceding the runway and would have been much more obvious.

The three stars on the top and seven stars on the bottom of the insignia symbolize the flight's numerical designation in the Space Transportation System's mission sequence. The stars also represented the Amateur Radio term "73" or "Best regards", consistent with the fact that the entire crew had become licensed and operated the SAREX experiment while on orbit.