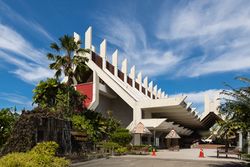 The Sabah Museum (Malay: Muzium Sabah) is the state museum of Sabah, Malaysia. It is sited on 17 ha of land at Bukit Istana Lama in Kota Kinabalu, the state capital. The complex contains not only the museum proper, but also an ethnobotanic garden, a zoo and a heritage village. The main building also houses the Sabah art gallery. Other galleries cover Islamic civilisation, archaeology and history, natural History, and ceramics and Brassware. The mission of the museum is to collect, preserve, conserve and document ethnographic, archaeological, historical, numismatic, art-historical, botanical, zoological and mineralogical collections from throughout the state, and to conduct research on important and interesting aspects of Sabah's history, culture, and social and natural history.

The Sabah Museum was established in 1965 in a shophouse in Gaya Street, Kota Kinabalu, largely due to the efforts of the Sabah Society. The George Cathcart Woolley Collection of photographs, diaries and other artefacts, bequeathed to the State Government of Sabah, formed the nucleus of the Museum.[1][2][3] The first Curator of the Museum was E.J. Berwick. In 1981, it came under the Ministry of Community Services and then, in 1982, under the Ministry of Culture, Youth and Sports. It moved to its current location in 1984. The new museum was officialy opened on 11 April 1984 by the seventh Yang di-Pertuan Agong, Sultan Ahmad Shah of Pahang.