From Infogalactic: the planetary knowledge core
Jump to: navigation, search
Not to be confused with Sabaeans, who were ancient people living in what is now Yemen; or with Sabians, followers of an ancient religion in Babylonia; or with Subbotniks; or with first-day or seventh-day Sabbatarians.

Sabbateans (Sabbatians) is a complex general term that refers to a variety of followers of, disciples and believers in Sabbatai Zevi (1626–1676), a Jewish rabbi who was proclaimed to be the Jewish Messiah in 1665 by Nathan of Gaza. Vast numbers of Jews in the Jewish diaspora accepted his claims, even after he became a Jewish apostate with his conversion to Islam in 1666. Sabbatai Zevi's followers, both during his "Messiahship" and after his conversion to Islam, are known as Sabbateans. They can be grouped into three: "Maaminim" (believers), "Haberim" (associates), and "Ba'ale Milhamah" (warriors).[1] 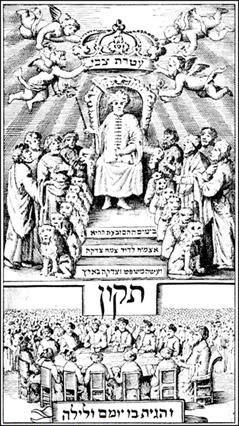 Sabbatai Zevi "enthroned" as the Jewish Messiah, from Tikkun, Amsterdam, 1666.

In Jewish history during the two centuries after Zevi's death in 1676, many Jews (including some Jewish scholars) who were horrified[citation needed] by Zevi's personal conversion to Islam nevertheless clung to the belief that Zevi was still the true Jewish Messiah. They constituted the largest number of Sabbateans during the seventeenth and eighteenth centuries. They were vigorously opposed and were eventually forced into hiding their beliefs by the methodical opposition of almost all the leading rabbis who were determined to root out Zevi's kabbalistically derived anti-traditional teachings and his influence upon the Jewish masses. By the nineteenth century Jewish Sabbateans had been reduced to small groups of hidden followers who feared being discovered for their beliefs that were deemed to be entirely heretical and antithetical to classical Judaism (particularly since the head of the movement, Zevi, had become an openly practicing Muslim for the last ten years of his life until the time of his mysterious and premature death at the age of fifty.)

Jewish historians[who?] have stated that it is hard to describe the national sense of shock and trauma that set in when the masses of Jews all over the world learned that someone as famous as Sabbatai Zevi had officially abandoned his faith for Islam. However, the fact remains that Zevi is the most famous Jew to have become a Muslim, which is also what the term Sabbatean has come to denote. Many within Zevi's inner circle followed him into Islam, including his wife Sarah and most of his closest relatives and friends.[citation needed] Nathan of Gaza, the scholar closest to Zevi, who had caused Zevi to reveal his Messiahship and in turn became his prophet, never followed his master into Islam but remained a Jew, albeit excommunicated by his Jewish brethren.[citation needed]

Claims of ties between Sabbatean Kabbalah and Sufism go back to the days of Sabbatai Zevi.[2][citation needed] This is largely based on the contention that Zevi's exile in the Balkans brought him into close contact with several forms of unorthodox Sufism which existed in the region. The Dönme community of Salonika came to play a significant role in the Sufi life of the region and its members actively involved with a number of Sufi orders, particularly the Mevlevi. Some alleged similarities between Dönme and unorthodox Sufi practice seem[original research?] to exist, including the violation of kashrut/halal, sexual license, ecstatic singing, mystical interpretations of sacred scripture, and the practice of ritual meals. However, confirmed direct ties between Sabbatai Zevi and any Sufi order are conjectural and hearsay. The often claimed connection between the movement and Bektashi Sufism relies merely on circumstantial evidence and coincidence rather than any concrete substantiation. During Zevi's lifetime the Bektashi order had yet to attain widespread popularity in the Balkans; it came to dominate southern Albania only in the late 19th century. Nevertheless, there were a number of other heterodox Sufi movements in the region in the mid-17th century, including the Hamzevis, Melamis and Qalandars.[citation needed]

Inside the Ottoman Empire, those followers of Zevi who had converted to Islam but who secretly continued Jewish observances became known as the Dönme (Turkish: dönme "convert").

The Emden-Eybeschutz controversy was a serious rabbinical disputation with wider political ramifications in Europe that followed the accusations by Rabbi Jacob Emden (1697–1776) who was a fierce opponent of the Sabbateans, against Rabbi Jonathan Eybeschutz (1690–1764) whom he accused of being a secret Sabbatean.[citation needed]

Emden's assertion of heresy was chiefly based on the interpretation of some amulets prepared by Eybeschutz, in which Emden professed to see Sabbatean allusions. Hostilities began before Eybeschutz left Prague; when Eybeschutz was named chief rabbi of the three communities of Altona, Hamburg, and Wandsbek (1751), the controversy reached the stage of intense and bitter antagonism. Emden maintained that he was at first prevented by threats from publishing anything against Eybeschutz. He solemnly declared in his synagogue the writer of the amulets to be a Sabbathean heretic and deserving of cherem (excommunication).[citation needed]

The majority of the rabbis in Poland, Moravia, and Bohemia, as well as the leaders of the Three Communities, supported Eybeschutz:[citation needed] the accusation was "utterly incredible" - in 1725, Eybeschutz was among the Prague rabbis who excommunicated the Sabbatean sect.[citation needed] (Others[who?] suggest that the rabbis issued this ruling because they feared the repercussions if their leading figure was found to be a Sabbatean[citation needed]).

The controversy was a momentous incident in Jewish history of the period, involving both Rabbi Yechezkel Landau and the Vilna Gaon, and may be credited with having crushed the lingering belief in Sabbatai current even in some Orthodox circles. In 1760 the quarrel broke out once more when some Sabbatean elements were discovered among the students of Eybeschutz' yeshivah. At the same time his younger son, Wolf, presented himself as a Sabbatean prophet, with the result that the yeshivah was closed.[citation needed]

Critics of Hasidic Judaism[who?] expressed concern that Hasidism might become a messianic sect as had occurred among the followers of both Sabbatai Zevi and Jacob Frank. However The Baal Shem Tov, the founder of Hasidism, came at a time when the Jewish masses of Eastern Europe were reeling in bewilderment and disappointment engendered by the two Jewish false messiahs Sabbatai Zevi (1626–1676) and Jacob Frank (1726–1791) in particular.

Some scholars have noted that the Sabbatean movement in general fostered and connected well with the principles of modern secularism.[3] Related to this is the drive of the Donmeh in Turkey for secularizing their society just as European Jews promoted the values of Age of Enlightenment and its Jewish equivalent the haskalah.[citation needed] 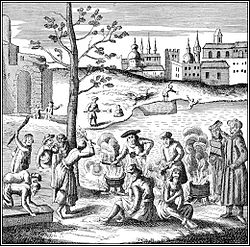 Former followers of Shabbatai do penance for their support of him.

Sabbatai's conversion to Islam was extremely disheartening for the world's Jewish communities. Prominent rabbis who were believers in and followers of Sabbatai were prostrated with shame. Among the masses of the people the greatest confusion reigned. In addition to the misery and disappointment from within, Muslims and Christians jeered at and scorned the credulous and duped Jews.[citation needed] In spite of Sabbatai's apostasy, many of his adherents still tenaciously clung to him, claiming that his conversion was a part of the Messianic scheme. This belief was further upheld and strengthened by the likes of Nathan of Gaza and Samuel Primo, who were interested in maintaining the movement. In many communities the solemn Jewish fast days Seventeenth of Tammuz and the Ninth of Av were still observed as joyous feast-days in spite of bans and excommunications.[citation needed]

Rabbis who opposed the Sabbateans

Rabbi Joseph Escapa (1572–1662)[citation needed] was especially known for having been the teacher of Zevi and for having afterward excommunicated him.

Rabbi Aaron Lapapa (1590–1674) was the rabbi at Smyrna in 1665, when Zevi's movement was at its height there. He was one of the few rabbis who had the courage to oppose the false prophet and excommunicate him. Zevi and his adherents retorted by deposing him and forcing him to leave the city, and his office was given to his colleague, Hayyim Benveniste, at that time one of Sabbatai's followers. After Sabbatai's conversion to Islam, Lapapa seems to have been reinstated.[citation needed]

Rabbi Jacob Hagis (1620–1674) was one of Zevi's chief opponents, who put him under the ban. About 1673 Hagis went to Constantinople to publish his Lehem ha-Panim, but he died there before this was accomplished. This book, as well as many others of his, was lost.

Rabbi Jacob ben Aaron Sasportas (1610–1698) was one of the fiercest opponents of the Sabbatean movement. He wrote many letters to various communities in Europe, Asia, and Africa, exhorting them to unmask the impostors and to warn the people against them. He wrote a number of works, such as Toledot Ya'akob (1652), an index of Biblical passages found in the haggadah of the Jerusalem Talmud, similar to Aaron Pesaro's Toledot Aharon, which relates to the Babylonian Talmud only; Ohel Ya'ako (1737) that were polemical correspondence against Zevi and his followers.

Rabbi David Nieto (1654–1728) was the haham of the Spanish and Portuguese Jewish community in London. He waged war untiringly on the Sabbateans, which he regarded as dangerous to the best interests of Judaism, and in this connection wrote his Esh Dat (London, 1715) against Nehemiah Hayyun (who supported Zevi).

Rabbi Tzvi Ashkenazi (1656–1718) known as the Chacham Tzvi, for some time rabbi of Amsterdam, was a resolute opponent of the followers of Sabbatai Zevi. In Salonica he also witnessed the impact of the Sabbatai Zevi movement on the community, and this experience became a determining factor in his whole career. His son Jacob Emden served as rabbi in Emden and followed in his father's footsteps in combating the Sabbatean movement.

Rabbi Jacob Emden (1697–1776) was Talmudic scholar and leading opponent of the Sabbatians. He is best known as the opponent of Rabbi Jonathan Eybeschutz whom he accused of being a Sabbatean during the The Emden-Eybeschütz Controversy.

Rabbi Naphtali Cohen (1649–1718) was a kabbalist who was tricked into giving an approbation to a book by the Sabbatean Nehemiah Hayyun. Provided with this and with other recommendations secured in the same way, Hayyun traveled throughout Moravia and Silesia, propagating everywhere his Sabbatean teachings. Cohen soon discovered his mistake, and endeavored, without success, to recover his approbation, although he did not as yet realize the full import of the book. It was in 1713, while Cohen was staying at Breslau (where he acted as a rabbi until 1716), that Haham Tzvi Ashkenazi of Amsterdam informed him of its tenets. Cohen thereupon acted rigorously. He launched a ban against the author and his book, and became one of the most zealous supporters of Haham Tzvi in his campaign against Hayyun.