Saint Helier (/sintˈhɛliər/) is one of the twelve parishes of Jersey, the largest of the Channel Islands in the English Channel. St Helier has a population of about 33,500, roughly 34.2% of the total population of Jersey, and is the capital of the Island (although Government House is situated in St Saviour). The urban area of the parish of St Helier makes up most of the largest town in Jersey, although some of the town area is situated in adjacent St Saviour, with suburbs sprawling into St Lawrence and St Clement. The greater part of St Helier is rural.

The parish arms are two crossed gold axes on a blue background, the blue symbolising the sea, and the axes symbolising the martyrdom of Helier at the hands of Saxon pirates in 555 AD. 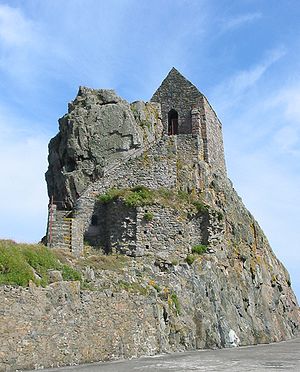 It is thought that the site of St Helier was settled at the time of the Roman control of Gaul.

The medieval hagiographies of Helier, the patron saint martyred in Jersey and after whom the parish and town are named, suggest a picture of a small fishing village on the dunes between the marshy land behind and the high-water mark.

Although the Parish Church of St Helier is now some considerable distance from the sea, at the time of its original construction it was on the edge of the dunes at the closest practical point to the offshore islet called the Hermitage (site of Helier's witness and martyrdom). Before land reclamation and port construction started, boats could be tied up to the churchyard wall on the seaward side.

An Abbey of St Helier was founded in 1155 on L'Islet, a tidal island adjacent to the Hermitage. Closed at the Reformation, the site of the abbey was fortified to create the castle that replaced Mont Orgueil as the Island's major fortress. The new Elizabeth Castle was named after the Queen by the Governor of Jersey 1600-1603, Sir Walter Raleigh.

Until the end of the 18th century, the town consisted chiefly of a string of houses, shops and warehouses stretching along the coastal dunes either side of the Church of St Helier and the adjacent marketplace (since 1751, Royal Square). La Cohue (a Norman word for courthouse) stood on one side of the square, now rebuilt as the Royal Court and States Chamber (called collectively the States Building). The market cross in the centre of the square was pulled down at the Reformation, and the iron cage for holding prisoners was replaced by a prison gatehouse at the western edge of town. 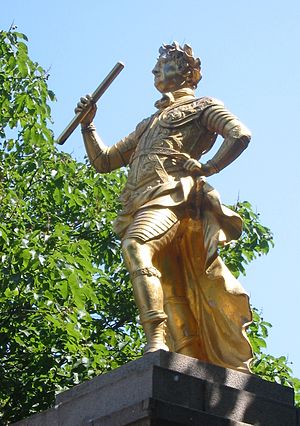 George II gave £200 towards the construction of a new harbour - previously boats would be beached on a falling tide and unloaded by cart across the sands. A statue of the king by John Cheere was erected in the square in 1751 in gratitude, and the market place was renamed Royal Square, although the name has remained Lé Vièr Marchi (the old market) to this day in Jèrriais. Many of St Helier's road names and street names are bilingual English/French or English/Jèrriais, but some have only one name. The names in the various languages are not usually translations: distinct naming traditions survive alongside each other.

The Royal Square was also the scene of the Battle of Jersey on 6 January 1781, the last attempt by French forces to seize Jersey. John Singleton Copley's epic painting The Death of Major Pierson captures an imaginative version of the scene.

As harbour construction moved development seaward, a growth in population meant that marshland and pasture north of the ribbon of urban activity was built on speculatively. Settlement by English immigrants added quarters of colonial-style town houses to the traditional building stock.

Continuing military threats from France spurred the construction of a citadel fortress, Fort Regent, on the Mont de la Ville, the crag dominating the shallow basin of St Helier.

Military roads linking coastal defences around the island with St Helier harbour allowed farmers to exploit Jersey's temperate micro-climate and use new fast sailing ships and then steamships to get their produce to the markets of London and Paris before the competition. This was the start of Jersey's agricultural prosperity in the 19th century. 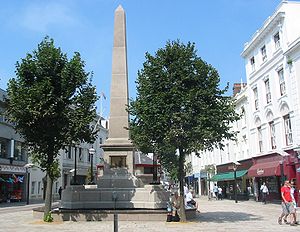 In 1855 an obelisk was constructed in Broad Street to commemorate the reformer Pierre Le Sueur, five times elected Constable of St Helier. The monument was restored in 2005 and the fountains restored to working order.

From the 1820s, peace with France and better communications by steamships and railways to coastal ports encouraged an influx of English-speaking residents. Speculative development covered the marshy basin north of the central coastal strip as far as the hills within a period of about 40 years, providing the town with terraces of elegant town houses.

In the second half of the 19th century, hundreds of trucks laden with potatoes and other export produce needed access to the harbour. This prompted a programme of road-widening which swept away many of the ancient buildings of the town centre. Pressure for redevelopment has meant that very few buildings remain in urban St Helier which date to before the 19th century, giving the town primarily a Regency or Victorian character.

Pierre Le Sueur, reforming Constable of St Helier, was responsible for installing sewerage and provision of clean water in St Helier following outbreaks of cholera in the 1830s. An obelisk with fountain in the town centre was raised to his memory following his premature death in office from overwork.

In the 1970s, a programme of pedestrianisation of the central streets was undertaken. 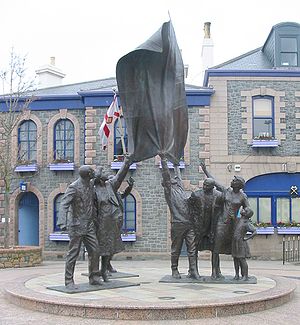 The statue in "Liberation Square"

In 1995, to celebrate the 50th anniversary of Jersey's liberation from Nazi occupation, and thus 50 years of peace, a sculpture was erected in what is now called "Liberation Square", in front of the Pomme d'Or Hotel, the focal point for the celebrations when the island was liberated.

The sculpture was originally to depict islanders releasing doves of peace, but this came under fierce criticism, with some islanders remarking that had any doves been on the island during the occupation, they would have been eaten by starving German soldiers. Therefore, the sculpture was revised to show islanders raising the British flag, as they had done on the day of liberation 50 years previous.

Liberation Square is now a focal point in the town - the former terminus of the Jersey Railway housed the Jersey Tourism office until 2007.

In 2006, it was reported[2] that the Connétable, with the backing of the Chief Minister of Jersey, was to seek city status for St Helier. 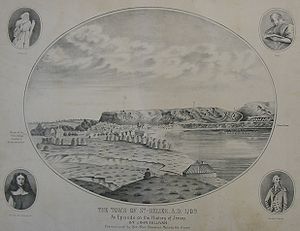 Saint Helier is the most populated of Jersey's parishes, with 33,522 residents according to the 2011 census.[4] 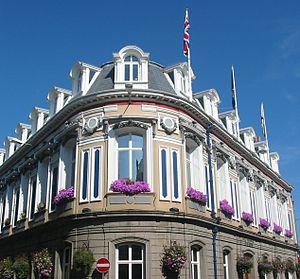 The parish is divided into vingtaines for administrative purposes:

For electoral purposes, the parish is divided into 4 districts.

votes from polling stations in Nos. 3 and 4 are combined into one district electing 4 Deputies. This district is the largest constituency in the Island.

All parishes of Jersey, including St Helier, have an Honorary Police force.

With the Constable, the parish therefore has 11 representatives in the States of Jersey (out of 53 elected members).

The Parish also has its own responsibilities and elections to the Municipality of St Helier take place to elect honorary officials who fulfill a variety of roles for Parishioners under the overall control of the Constable, two Procureurs du Bien Public and the Parish Assembly.

Five members of the Roads Committee and ten Roads Inspectors are also elected by parishioners and ensure that the roads of the parish are kept in good repair.

The Assessment Committee are elected to agree the rate chargeable to each property in the Parish.

The Accounts Committee are elected to ensure that the accounts of the Parish represent a 'true and fair view' of the state of the Parish finances in order that the Parish Assembly may rely upon the information to set the Parish Rate.

Elected officials are supported by a paid administration within the Parish. 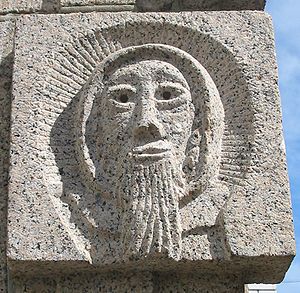 The face of Saint Helier as sculpted on the 1978 monument La Croix de la Reine in St Helier.

Saint Helier is named for Helier (or Helerius), a 6th-century ascetic hermit. The traditional date of his martyrdom is AD 555. His feast day, marked by an annual municipal and ecumenical pilgrimage to the Hermitage, is on 16 July.

Many places in St Helier have been formally listed as Sites of Special Interest by the Planning and Environment department of Jersey.[5] Not all are mentioned on this page, only those which are most prominent. 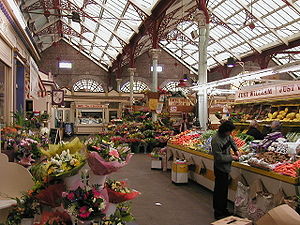 The Central Market, in Beresford Street, St Helier, is an indoor market which was opened in 1882.[6] It is an official Site of Special Interest,[7] and is popular with tourists and locals. It features Victorian architecture including cast iron structures, and an ornamental fountain in the centre. The market comprises stalls selling flowers, fruit, and vegetables, as well as small shops and cafés.

Beresford Market is a separate building next to the Central Market, and specialises in fishmongery.[8]

This is an 18th-century Georgian townhouse, with some 19th-century additions, which has been renovated by the National Trust for Jersey, and is now operated as a museum.[9][10]

Saint Helier is twinned with:

Sports facilities include Springfield Stadium, swimming pools, pétanque pitches, and badminton. Motor sports events take place on roads in the Parish as well as an annual Town Criterium, and the start and finish of the Jersey Marathon.

The parish has hosted the Jersey Battle of Flowers carnival since 1902.