The śalākāpuruṣa comprise 24 Tirthankaras (Teaching Gods), twelve Chakravartin (universal monarchs, emperors of six continents), nine Balabhadras (gentle heroes), nine Narayanas (warrior heroes) and nine Prati-narayanas (anti-heroes).[1][5] According to Jain cosmology, time is without beginning and eternal. The Kālacakra, the cosmic wheel of time, rotates ceaselessly. The wheel of time is divided into two half-rotations, Utsarpiṇī or ascending time cycle and Avasarpiṇī, the descending time cycle, occurring continuously after each other. Utsarpiṇī is a period of progressive prosperity and happiness where the time spans and ages are at an increasing scale while the Avasarpiṇī is a period of increasing sorrow and immorality with decline in time spans of the epochs.[6] During each such time cycle, these 63 illustrious persons appear and establish the religion and order in society. According to Jain cosmology, since time is eternal, infinite kalacakras have elapsed and will occur in future and hence infinite sets of these 63 illustrious persons have appeared, and will appear, to establish order and religion in their respective eras.[7]

The word salakapurusa is often translated as illustrious persons or worthy persons or mighty persons. It is derived from the Sanskrit compound of words salaka and purusa. "Purusa" means person, but "salaka" is of ambiguous etymology in this context. The primary meaning of the word salaka (Sanskrit: Śalākā, Pali: salākā, Prakrit: salāgā, salāyā) is "stick". In the Buddhist context it meant a ticket consisting of wooden sticks meant for voting or to distribute food; but in Jain context it was used to mean a stick and also a measurement and when combined with "purusa" to denote great heroes.[8] According to 11th century Jain author, monk Acharya Hemachandra, these persons are called salaka as they have been specially marked among men. This emphasised that the names of the salakapurusas were underlined or specially significant due to their deeds. John Cort also quotes another author, S. D. Parekh, who emphasises the root meaning of voting sticks and concludes that a salakapurusa is a great person, as his greatness has been accepted by general public.[9] Certain Śvētāmbara texts use the word Baladeva, Vāsudeva and Prativasudeva to refer Balabhadra, Narayana and Pratinarayana respectively.

The tradition of salakapurusas or Jain universal history started with the biographies of the Tirthankaras. Kalpasutra gives the names and brief biographies of only tirthankaras. It does not use the word salakapurusas or mention them by name, but does say that the categories of Arihants, Chakravartins, Balabhadras and Vasudevas are always born in royal families, thus foreshadowing 54 of the 63 salakapurusas. Furthermore, Jaini traces the origin of list of Baladeva and Vasudeva to the Jinacharitra (lives of the Jinas) by Bhadrabahu (3–4th century BCE).[10] A notable hagiography of these individuals is Hemachandra's Trīṣaṣṭiśalākāpuruṣacaritra.[11]

The following Jain texts chronicle the deeds of the salakapurusas:[12]

All traditions of Jainism now agree to the figure of 63 salakapurusas. However, the number of persons is 60 as three persons (Shantinath, Kunthunath and Aranath) were Chakravartins who later on became Tirthankaras.[citation needed]

Tīrthankaras (also known as Jinas) are Arhatas who are teachers and revivers of the Jain philosophy. There are 24 Tīrthankaras in each half time cycle; Mahāvīra was the 24th and last Tīrthankara of the current descending time cycle and Rishabha was the first Tirthankara. Tīrthankaras are literally "the ford makers", who have shown the way to cross the ocean of rebirth and transmigration and hence have become a focus of reverence and worship amongst Jains. The Tirthankara provides all creatures with the means to liberate the soul from the confines of the body and to rise towards bliss, enlightenment and release from the eternal cycle of rebirth. He advocates continence, truth, non-violence, simplicity and purity for those who seek liberation. Tīrthankaras ultimately become Siddhas on liberation. 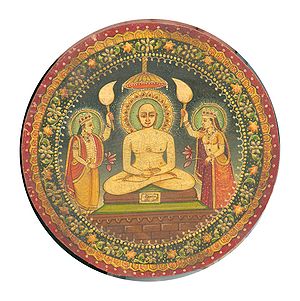 The twenty four Tīrthankaras of this descending time cycle are:

A Chakravartin (Universal Monarch) is the emperor of the world, lord of the material realm.[1] Though he possesses worldly power, he often finds his ambitions dwarfed by the enormity of the cosmos. Jain purunas give a list of 12 Chakravartins who flourished in this descending time cycle. Golden in complexion, they all belonged to Kasyapa gotra.[13] One of the greatest Chakravartis mentioned in Jain scriptures is Bharata in whose memory India came to be known as "Bharata-varsha". After conquering the whole world, King Bharata, brimming with pride, sought to inscribe his great feat on the slopes of Mount Meru. To his great dismay, he found the names of many other kings carved on Meru. Like him, they too had conquered the world. He was not the first man to do so. He was not the last. There were many before him, there were many after him. Bharata, humbled by the experience, returned to his kingdom to do his duty, aware that his actions were not unique and that his existence was not special.[1] The names of the twelve Chakravartins as per Jain Texts are:[14] 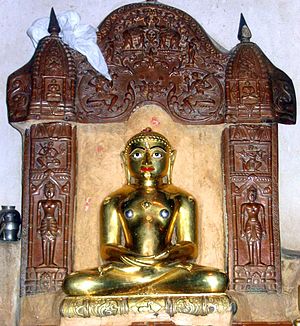 Lord Shantinatha, the sixteenth Jain Tirthankara was also a Chakravarti

In Jainism, a chakravarti was characterised by possession of saptaratna, or "seven jewels":

Some texts cite navaratna or "nine jewels" instead, adding "prime minister" and "son".

Triad of Baladeva, Vasudeva and Prativasudeva

In every half time cycle, there are 9 sets of Balabhadra (gentle heroes), Narayana (violent heroes) and Prativāsudevas (anti-heroes). Unlike in the Hindu Puranas, the names Balabhadra and Narayana are not restricted to Balarama and Krishna in Jain puranas. Instead they serve as names of two distinct classes of mighty half brothers, who appear nine times in each half of the time cycles of the Jain cosmology and jointly rule half the earth as half-chakravarti. Ultimately Prati-naryana is killed by Narayana for his unrighteousness and immorality. Jaini traces the origin of this list of brothers to the Jinacaritra (lives of the Jinas) by Bhadrabahu swami (3-4th century BCE).[10] Jain Ramayana is based on the stories of Rama, Lakshmana and Ravana who are the eighth Baladeva, Narayana, Pratinarayana and respectively. Similarly Harivamsa Purana is based on the stories of Balarama, Krishna and Jarasandha, who are the ninth and the last set of Balabhadra, Narayana, and Pratinarayana.[15] However, the main battle is not the Mahabharata, but the fight between Krishna and Jarasandha who is killed by Krishna.

According to Jain texts, Narayana are generally of dark complexion and wear yellow garments. There are seven weapons and symbols of Narayana, namely: conch, discus (sudarshana chakra), club, bow, sword, jewel (kaustubha mani) and a garland of flowers (vanamala). Baladevas, half-brothers of Vasudevas, are described as fair in complexion and wear garments of dark blue and have a banner of palm tree. Their symbols or weapons are: bow, plough, pestle and arrow. The two brothers are inseparable and they jointly rule three continents as half-Chakravarti. Although Narayana is the mightier of the two, Balabhadra is depicted as superior for his non-violent ways and he achieves liberation. According to the Jain puranas, the Balabhadras lead an ideal Jain life.[16] Out of nine Balabhadra, eight attain liberation and the last one goes to heaven. On the other hand, Narayana go to hell on account of their violent exploits, even though they did these in order to uphold righteousness.[17] 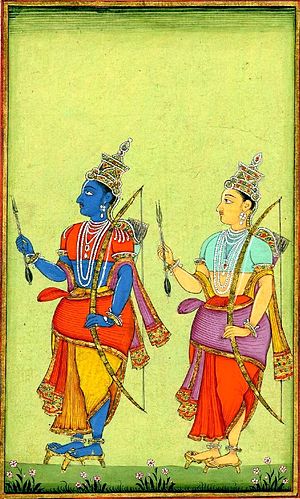 Other classes of heros

In Jain universal history, other than these 63 Salakapurusa, there are other classes of 106 people who, though not depicted as salakapurusas, are important enough to be mentioned separately. They are: