Sallekhanā (also Santhara, Samadhi-marana, Sanyasana-marana), is the Jain practice of facing death voluntarily at the end of one's life.[1][2] It is prescribed both for the householder and ascetics.[3] Sallekhana is made up from two words sal (meaning 'properly') and lekhana, which means to thin out. Properly thinning out of the passions and the body is 'Sallekhanā'.[4] Sallekhana is allowed only when a person is suffering from incurable disease or great disability or when a person is nearing his end.[1] It is a highly respected practice among the members of the Jain community.[5] According to Jain Agamas, sallekhanā leads to ahimsā (non-violence or non-injury), as person observing sallekhanā subjugates the passions, which are the root cause of himsā (injury or violence).[6]

An ascetic or householder who has observed all these vows to shed the karmas, takes the vow of Sallekhana at the end of his life.[12] According to the Jain text, Purushartha Siddhyupaya, "sallekhana enable a householder to carry with him his wealth of piety".[14] Sallekhana is treated as a supplementary to the twelve vows taken by Jains. However, some Jain Acharyas such as Kundakunda, Devasena, Padmanandin and Vasunandin have included it under the last vow, śikşā-vrata.[15]

The vow of sallekhanā is often explained with a famous analogy:[16]

Sallekhanā could be of two types:

File:Sallekhana.pdf According to Tattvartha Sutra (a compendium of Jain principles): "A householder willingly or voluntary adopts Sallekhana when death is very near."[2][18] Observance of the vow of sallekhanā starts much before the approach of death. A householder persistently meditate on the verse: "I shall certainly, at the approach of death, observe sallekhanā in the proper manner."[19] The duration of the practice could be up to twelve years or more.[20] Sixth part of the Jain text, Ratnakaranda śrāvakācāra is on sallekhanā and its procedure.[21]

Jain texts mention five transgressions of the vow of sallekhanā:[18][22]-

The person observing sallekhana does not wish to die nor he is aspiring to live in a state of inability where he/ she can't undertake his/ her own chores. In Jainism, there is a daily prayer where a person wishes to be able to face death after having taken the vow of sallekhana. Due to the prolonged nature of sallekhana, the individual is given ample time to reflect on his or her life. The purpose is to purge old karmas and prevent the creation of new ones.[23]

According to a survey conducted in 2006, on an average 200 Jains practice sallekhana until death each year in India.[24] Statistically, Sallekhana is undertaken both by men and women of all economic classes and among the educationally forward Jains. 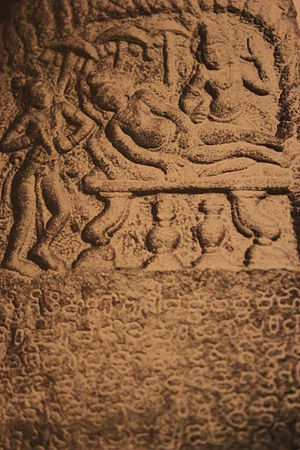 Doddahundi nishidhi inscription was raised in honor of Western Ganga Dynasty King Nitimarga I in 869 C.E. The king was a devout Jain who observed the vow of Sallekhana. These memorial stones (nishidhi) were raised in medieval India to honor noted Jains who took Sallekhana. 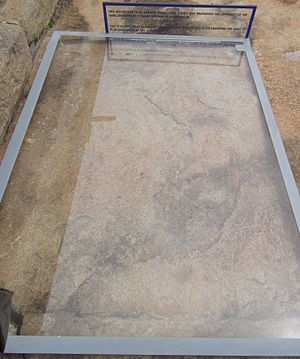 A sallekhana inscription at Shravanbelgola. Inscription (130) is in characters of the 7th century.

In around 300 BC, Chandragupta Maurya (founder of the Maurya Empire) undertook Sallekhana atop Chandragiri Hill, Śravaṇa Beḷgoḷa, Karnataka.[25][26][27] Chandragupta basadi at Shravanabelagola (a chief seat of the Jains) marks the place where the saint Chandragupta died.[28] Acharya Shantisagar, a highly revered Digambara Jain saint of the modern India took Sallekana on 18 August 1955 because of inability to walk without help and weak eye-sight.[29][30] He died on 18 September 1955.[31]

Sallekhanā is often confused as suicide.[32] Though, Jain texts clearly mention the differences between the two. According to Jain text, Puruṣārthasiddhyupāya:

"When death is imminent, the vow of sallekhanā is observed by progressively slenderizing the body and the passions. Since the person observing sallekhanā is devoid of all passions like attachment, it is not suicide.

Like most religions, Jainism forbids all forms of suicides. Suicide involves an intentional act of harm against oneself with a known outcome that negatively affects those left behind. It is believed that the precipitous taking of one's life constitutes only a perpetuation of the karma from the current life (particularly that associated with negativity or suffering), which is thus "inherited" by the subsequent life to be assumed through reincarnation. Suicide does not allow escape from one's karma, nor from one's cycle of births and rebirths. However, in the practise of Sallekhana, it is viewed that death is "welcomed" through a peaceful, tranquil process that provides peace of mind and sufficient closure for the adherent, their family and/or community.[33]

Whereas suicide is an act of extreme desperation fuelled by anguish and hopelessness, a Sallekhana practitioner relinquishing food and drink voluntarily by this method has arrived at that decision after calm and unruffled introspection, with an intent to cleanse oneself of karmic encumbrances and thus attain the highest state of transcendental well-being. Sallekhana, for him/ her, is therefore simply an act of spiritual purification premised on an exercise of individual autonomy. In both the writings of Jain Agamas and the general views of many followers of Jainism, due to the degree of self-actualisation and spiritual strength required by those who undertake the ritual, Sallekhana is considered to be a display of utmost piety, purification and expiation.[34]

In his book, Sallekhanā is Not Suicide, Justice T. K. Tukol wrote:[35]

My studies of Jurisprudence, the Indian Penal Code and of criminal cases decided by me had convinced that the vow of Sallekhana as propounded in the Jaina scriptures is not suicide.

According to Champat Rai Jain, "The true idea of Sallekhanā is only this that when death does appear at last, one should know how to die, that is, one should die like a monk, not like a beast, bellowing and panting and making vain efforts to avoid, the unavoidable."[36][37]

According to advocate, Suhrith parthasarathy, "Sallekhana is not an exercise in trying to achieve an unnatural death, but is rather a practice intrinsic to a person’s ethical choice to live with dignity until death".[38]

See also: Legal status of Jainism as a distinct religion in India

In 2006 human rights activist Nikhil Soni and his lawyer Madhav Mishra, filed a Public Interest Litigation with the Rajasthan High Court. The PIL claimed that Sallekhana should be considered to be suicide under the Indian legal statute. They argued that Article 21 of the Indian constitution only guarantees the right to life, but not to death.[39] The petition extends to those who facilitate individuals taking the vow of with aiding and abetting an act of suicide. In response, the Jain community argued that it is a violation of the Indian Constitution’s guarantee of religious freedom.[40] It was argued that Sallekhana serves as a means of coercing widows and elderly relatives into taking their own lives.[41]

This landmark case sparked debate in India, where national bioethical guidelines have been in place since 1980.[42]

In August 2015, the Rajasthan High Court stated that the practice is not an essential tenet of Jainism and banned the practice making it punishable under section 306 and 309 (Abetment of Suicide) of the Indian Penal Code.[43]

On 24 August 2015, members of the Jain community held a peaceful nationwide protest against the ban on Santhara.[44] Protests were held in various states like Rajasthan, Gujarat, Madhya Pradesh, Maharashtra, Delhi etc.[45] Silent march were carried out in various cities.[46]

On 31 August 2015, Supreme Court of India stayed the decision of Rajasthan High Court and lifted the ban on santhara. The Special Leave Petition brought before the Supreme Court of India was filed by Akhil Bharat Varshiya Digambar Jain Parishad.[47][48] Supreme court considered Santhara as a component of non-violence ('ahimsa').[49]