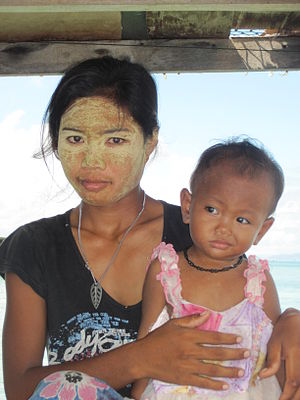 The Sinama speakers of Semporna, Malaysia are known as Bajau. This Bajau woman wears "borak" the traditional sun protection. 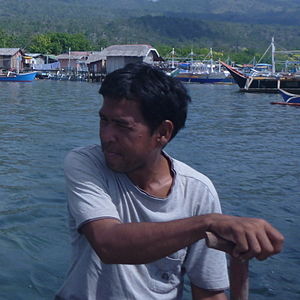 Rowing out from Tinutu' Village, a Sama village outside of Sulu where several Central Sinama dialects are spoken. Most notably Sinama Musu' and Sinama Silumpak.

The Sama language, Sinama (Sama + the infix -in-; also known as Siyamal and Bajau), is the language of Sama people of the Sulu Archipelago and the Bajau of Sabah, Malaysia. The Sama are one of the most widely dispersed peoples in Southeast Asia.

The Ethnologue divides Sinama into 4 languages based on mutual intelligibility. The 4 Sinama languages are Northern Sinama, Central Sinama, Southern Sinama, and Sinama Pangutaran from the island of Pangutaran off of Jolo island. Jama Mapun, a language from the island of Mapun, formerly known as Cagayan de Sulu, is a related language and sometimes also referred to as Sinama. These classifications are rarely recognized by Sama themselves who instead classify their Sinama by the village or island it originates from. The emic classification of a Sama person's language e.g. Silumpak, Laminusa, Tabawan generally form the different dialects of the 4 Sinama languages. 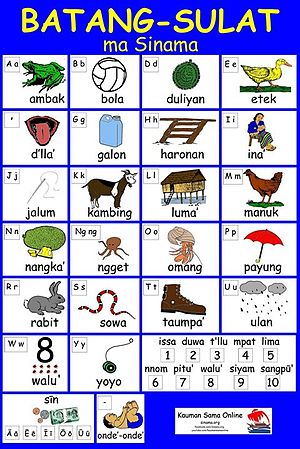 A reading poster for the Sinama language created by Kauman Sama Online for free use. 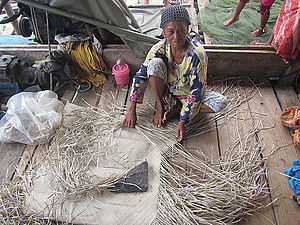 This woman making a traditional mat is a Sama from Siasi who now lives in Semporna, Malaysia.

In certain dialects of Sinama b becomes β and g becomes Ɣ when found between two vowels.

Many of the Sinama languages have contrastive vowel lengthening. This is represented by a macron over the vowel (āēīōū).

Sinama pronunciation is quite distinct from other nearby languages such as Tausug and Tagalog in that all of the Sinama languages primary stress occurs on the penultimate syllable of the word.[8]:124 Stress will remain on the penultimate syllable even with the addition of suffixes including enclitic pronouns. In Northern Sinama (Balanguingi') the stress will shift to the ultima when the penult is the mid central vowel /ə/.

The 1st, 2nd, & 3rd singular pronouns -ku, -nu and -na respectively, the 1st plural inclusive pronouns -ta and -tam, as well as the 2nd plural pronoun -bi are all enclitics.[9] These enclitic pronouns change the pronunciation by shifting the stress of a word through the addition of a syllable; a verb or noun combined with a suffixed one syllable enclitic pronoun. Some Sinama orthographies represent this by writing both noun/verb and pronoun as one word e.g. luma'ta for "our house" in Central Sinama. Other orthographies represent this with a hypen e.g. luma'-ta for "our house" in Southern Sinama. Still others write this keeping the noun/verb separate from the prounoun e.g. luma' ta for "our house" in Northern Sinama.

The lyrics of the song called Kiriring Pakiriring (popularly known as Dayang Dayang) were written in the Simunul dialect of the Southern Sinama language.

Central Sinama and Southern Sinama are 2 of 6 languages used in the 2012 Filipino drama film, Thy Womb.