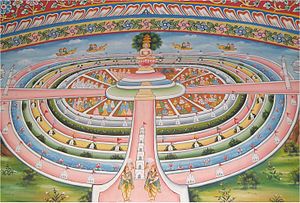 In Jainism, Samavasarana or Samosharana "Refuge to All" is a term for the divine preaching hall of the Tirthankara. The word samavasarana is derived from two words, sama meaning general and avasara meaning opportunity. A place where all have a common opportunity of acquiring the wisdom.[1] The divine pavilion is built by heavenly beings (devas) after the tirthankara attain omniscience (Kevala Jnana).[2] The theme of Samavasaranas has been popular in Jain art. 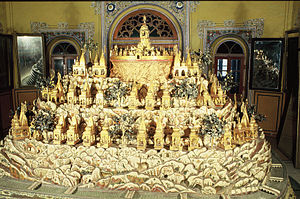 In samavasarana, the tirthankara sat on a throne without touching it (about two inches above it).[3] Around, the tirthankara sits the ganadharas (chief disciples). Following is the order in which living beings sit:[4]

According to Jain texts, there would be four wide roads with four huge columns, Manasthamba (literally, pride pillar), one in each side.[5] The total size of the hall varies depending upon the height of the people in that era. Size of Rishabhadeva's samavasarana was 12 km².[6] 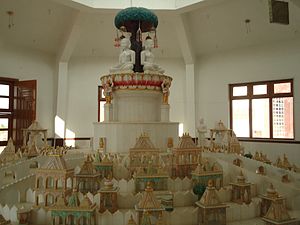 In samavasarana, a tirthankara sits facing the east, but appears to be looking in all directions.[4] Tirthankara sits on a soft cushion while preaching the Jain philosophy in plain terms.[7] All humans and animals can understand the discourse. Jain scriptures say that all creatures who listen would become less violent and greed less.[8] The speech of the tirthankara is distinctly heard by every one present.[4]