Sammy Cahn (June 18, 1913 – January 15, 1993) was an American lyricist, songwriter and musician. He is best known for his romantic lyrics to films and Broadway songs, as well as stand-alone songs premiered by recording companies in the Greater Los Angeles Area. He and his collaborators had a series of hit recordings with Frank Sinatra during the singer's tenure at Capitol Records, but also enjoyed hits with Dean Martin, Doris Day and many others. He played the piano and violin. He won the Academy Award four times for his songs, including the popular song "Three Coins in the Fountain".

Cahn was born Samuel Cohen in the Lower East Side of New York City, the only son (he had four sisters) of Abraham and Elka Reiss Cohen, who were Jewish immigrants from Galicia, then ruled by Austria-Hungary.[2] His sisters, Sadye, Pearl, Florence, and Evelyn, all studied the piano. His mother did not approve of Sammy studying it though, feeling that the piano was a woman's instrument, so he took violin lessons. After three lessons and following his bar mitzvah, he joined a small dixieland band called Pals of Harmony, which toured the Catskill Mountains in the summer and also played at private parties. This new dream of Cahn's destroyed any hopes his parents had for him to be a professional man.[3]

Some of the side jobs he had were playing violin in a theater-pit orchestra, working at a meat-packing plant, serving as a movie-house usher, tinsmith, freight-elevator operator, restaurant cashier, and porter at a bindery. At age 16, he was watching vaudeville, of which he had been a fan since the age of 10, and he witnessed Jack Osterman singing a ballad Osterman had written. Cahn was inspired and, on his way home from the theater, wrote his first lyric, which was titled "Like Niagara Falls, I'm Falling for You – Baby." Years later he would say "I think a sense of vaudeville is very strong in anything I do, anything I write. They even call it 'a vaudeville finish,' and it comes through in many of my songs. Just sing the end of 'All the Way' or 'Three Coins in the Fountain'—'Make it mine, make it mine, MAKE IT MINE!' If you let people know they should applaud, they will applaud."[3]

Much of Cahn's early work was written in partnership with Saul Chaplin. They first met when Cahn invited Chaplin to audition for him at the Henry Street Settlement. Cahn said, "I'd learned a few chords on the piano, maybe two, so I'd already tried to write a song. Something I called 'Shake Your Head from Side to Side.'" Billed simply as "Cahn and Chaplin" (in the manner of "Rodgers and Hart"), they composed witty special material for Warner Brothers' musical short subjects, filmed at Warners' Vitaphone studio in Brooklyn, New York.

"There was a legendary outfit on West 46th Street, Beckman and Pransky ... they were the MCA, the William Morris of the Borscht Belt. I got a room in their offices, and we started writing special material. For anybody who'd have us—at whatever price." They did not make much money, but they did work with up-and-comers Milton Berle, Danny Kaye, Phil Silvers, and Bob Hope.[3]

One of his childhood friends was Lou Levy, who had gone from neighborhood bum to blackface dancer with the Jimmie Lunceford Orchestra.

Lyric writing has always been a thrilling adventure for me, and something I've done with the kind of ease that only comes with joy! From the beginning the fates have conspired to help my career. Lou Levy, the eminent music publisher, lived around the corner and we met the day I was leaving my first music publisher's office. This led to a partnership that has lasted many years. Lou and I wrote "Rhythm is Our Business," material for Jimmie Lunceford's orchestra, which became my first ASCAP copyright. I'd been churning out "special lyrics" for special occasions for years and this helped facilitate my tremendous speed with lyric writing. Many might have written these lyrics better—but none faster! Glen Gray and Tommy Dorsey became regular customers and through Tommy came the enduring and perhaps most satisfying relationship of my lyric writing career – Frank Sinatra.[4]

The song became the Orchestra's signature song. The duo then worked for Glen Gray's Casa Loma Orchestra and their premiere at Paramount Theatre. They also worked for Andy Kirk and his Clouds of Joy and they wrote Until the Real Thing Comes Along.[3]

Cahn wrote the lyrics to "Love and Marriage," which was used as the theme song for the FOX TV show Married... with Children. The song originally debuted in a 1955 television production of Our Town, and won an Emmy Award in 1956. This was only one of many songs that Cahn and Jimmy Van Heusen wrote for Frank Sinatra. They were "almost considered to be his personal songwriters."[5]

Cahn contributed lyrics for two otherwise unrelated films about the Land of Oz, Journey Back to Oz (1971) and The Wizard of Oz (1982). The former were composed with Van Heusen, the latter with Allen Byrns, Joe Hisaishi, and Yuichiro Oda.

Cahn became a member of the Songwriters Hall of Fame in 1972. He later took over the presidency of that organization from his friend Johnny Mercer when Mercer became ill.[6] 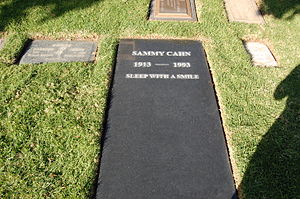 Cahn died on January 15, 1993, at the age of 79 in Los Angeles, California from heart failure. His remains were interred in the Westwood Village Memorial Park Cemetery.[7]

He was married twice: first to vocalist and former Goldwyn girl Gloria Delson[9] in 1945, with whom he had two children, and later to Virginia "Tita" Basile in 1970.

His second wife was Virginia (Tita) Curtis, a former fashion coordinator for the clothes designer Donald Brooks. He was the father of Laurie Cahn and jazz/fusion guitarist Steve Khan[5] who, early in his career, changed the spelling of his last name to Khan in order to "create a separate identity from [his] famous father" and because he was "so hurt and angry with him for so many childhood things."[10]

Composer Garrison Hintz exchanged numerous letters with Cahn regarding musical composition and credits Cahn with teaching him the craft of lyric writing.[11]

Over the course of his career, he was nominated for 26 Academy Awards, five Golden Globe Awards, and an Emmy Award. He also received a Grammy Award nomination, with Van Heusen, for Best Original Score Written for a Motion Picture or Television Show for the film Robin and the 7 Hoods.

In 1988, the Sammy Awards, an annual award for movie songs and scores, was started in his honor. When notified by Roger Lee Hall, Cahn said he was "flattered and honored" that these awards were named after him.[12] He was chosen because he had received more Academy Award nominations than any other songwriter, and also because he received four Oscars for his song lyrics.

In 1993, taking up the sentiments expressed in the song, "High Hopes," the Cahn estate established the "High Hopes Fund" at the Joslin Diabetes Center in Boston. The former Joslin patient and songwriter's goal was to provide hope and encouragement to kids with diabetes while supporting research into the causes of the disease.

The lyrics he wrote for Sinatra is the subject of a chapter in Gilbert Gigliotti's A Storied Singer: Frank Sinatra as Literary Conceit, "Come [Fly, Dance, and Waltz with] Us on Equal Terms": The Whitmanesque Sinatra of Sammy Cahn," published by Greenwood Press in 2002.

Cahn wrote lyrics for many songs, including:

Cahn wrote the lyrics for the following Broadway musicals: