Captain Samuel Bellamy (c. February 23, 1689 – April 26, 1717), later known as "Black Sam" Bellamy, was an English pirate who operated in the early 18th century. Though his known career as a pirate captain lasted little more than a year, he and his crew captured at least 53 ships under his command – making him the wealthiest pirate in recorded history[1] – before his death at age 28. Called "Black Sam" in Cape Cod folklore because he eschewed the fashionable powdered wig in favor of tying back his long black hair with a simple band, Bellamy became known for his mercy and generosity toward those he captured on his raids. This reputation earned him another nickname, the "Prince of Pirates". He likened himself to Robin Hood, with his crew calling themselves "Robin Hood's Men".[2]

Bellamy was the youngest of six known children born to Stephen and Elizabeth Bellamy in the parish of Hittisleigh in Devonshire, England, in 1689.[3] Elizabeth died soon after, and was buried on February 23, 1689, three weeks before Samuel's baptism on March 18. The future pirate became a sailor at a young age; in his late teens, he joined the Royal Navy and fought in several battles. Though it has been speculated that he may have had a wife and child, there is no definite historical proof of this.

Bellamy traveled to Cape Cod around 1715, allegedly to seek some of his relatives there. According to an abundance of local lore on the subject, it is believed that he took up an affair with a local beauty, Goody Hallett — the "Witch of Wellfleet".[4] Professor Elizabeth Reynard, in her 1934 book THE NARROW LAND, gave her the name Maria, and although it is highly unlikely that a Spanish Catholic name would be given to a girl in Puritan, Protestant New England at the time, and though there is no evidence of Goody bearing that name, it has nevertheless become a popular name for her. Other modern authors, playing off of the Maria moniker, have called her Mariah and Mary. Her age and marital status remains a subject of much debate. Some stories depict her as a young lady between 16 to 25, while others depict her as a vey old woman.[5] In some stories, her parents liked him, but didn't think a poor self-confident sailor was husband material;[6] circumstantial evidence indicates that Goody may have already been married, confirming some stories that it was Bellamy's intent to seek his fortune and then return, not to marry her, but to take her away. 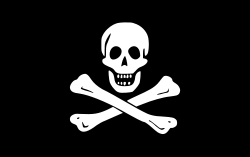 "...they spread a large black flag, with a Death's Head and Bones across, and gave chase to Cap't. Prince under the same colours." – Thom. Baker (Bellamy's crew)[7]

For whatever reason, he left Cape Cod in early 1716 with a group of men to seek the vast treasures on the Florida coast from the Spanish wreck of the 1715 Treasure Fleet. Wealthy jeweler Palgraves Williams (also recorded as Palsgrave, Paulgrave, Paulgraves, Paulsgrave and Paul),[8] son of Rhode Island Attorney General John Williams, joined Bellamy and funded their expedition. After Bellamy left the Cape, Goody was found to be pregnant by Bellamy. It is said that she gave birth to a son and hid the child in someone's barn for warmth while she foraged for food; and when she returned she found that the child had choked to death on the straw. Some legends say that it was the barn of the notable Knowles family, others claim it to be that of Justice Joseph Doane who had banished her. In either case, she was arrested for the child's murder and imprisoned in Barnstable Gaol (the oldest wooden jail house in the United States and claimed to be haunted by her).This was a scandal that eventually led to her being jailed. Her sentence was relatively short, but she was exiled from the town. Even after that, she still waited for him in Eastham.[6] The treasure hunters apparently met with little success, as they soon turned to piracy in the crew of pirate captain Benjamin Hornigold, who commanded the Marianne with his first mate, the soon to become famous Edward "Blackbeard" Teach.[8]

In the summer of 1716, the crew became irritated by Hornigold's unwillingness to attack ships of England, his home country. By a majority vote of the crew, Hornigold was deposed as captain of the Mary Anne and left the vessel with his loyal followers, including Teach. The remaining 90-man crew then elected Bellamy as captain.

Upon capturing a second ship, the Sultana, it was made into a galley, and with approval of the crew, Bellamy assigned his friend Palsgrave Williams as its commander.[8] However, Bellamy's greatest capture was to come in the spring of 1717, when he spotted the Whydah Gally (pronounced "WID-uh") sailing through the Windward Passage between Hispaniola and Cuba.[8] Built in England in 1715 as a state-of-the-art, 300-ton, 102-foot-long (31 m) English slave ship with 18 guns (cannons), and with speeds of up to 13 knots (24 km/h; 15 mph), the Whydah was on its maiden voyage in 1716 and had just finished the second (Africa to Caribbean) leg of the Atlantic slave trade, loaded with a fortune in gold, indigo, Jesuit's bark, ivory and other precious trade goods from the sale of 312 slaves.[8][9][10] Bellamy chased the Whydah for three days before getting close enough to fire. After a single shot, Captain Lawrence Prince surrendered the Whydah by lowering its flag. True to his reputation for generosity, Bellamy rewarded Prince's lack of resistance by trading the Sultana for the Whydah.[8] Removing the captain's quarters and upgrading the ship to 28 guns, Bellamy turned his new flagship northwards along the eastern coast of the Carolinas and on to New England.

Captain Samuel Bellamy, now known as Black Bellamy, was well-known to his contemporaries and chroniclers as a distinctive figure, a tall, strong, well mannered and very tidy man. He liked expensive clothes, especially black coats. His favorite weapons were four duelling pistols that he always carried in his sash:

"He made a dashing figure in his long deep-cuffed velvet coat, knee breeches, silk stockings, and silver-buckled shoes; with a sword slung on his left hip and four pistols on his sash. Unlike some of his fellows, Bellamy never wore the fashionable powdered wig, but grew his dark hair long and tied it back with a black satin bow."[11]

As captain, his leadership style was almost democratic. His crew was very fond of him, sometimes even referring to him as "Robin Hood of the Sea" and themselves as "Robin Hood's Men".[6] Captain Bellamy was also a good strategist. Usually, he had two ships under his control. His flagship was powerful with many cannons and the second one was light but fast, which made a good balance. With coordinated attacks, they managed to capture ships easily without harming them.

Captain Charles Johnson, a pseudonym,[Note 1] wrote what became the first standard historical text on pirates, A General History of the Robberies and Murders of the Most Notorious Pyrates. That source relates the story of the Whydah overtaking a sloop commanded by Captain Beer. Bellamy had wanted to let the captain keep his ship, but his crew had just voted to burn it, and the captain of the merchant vessel had just declined an invitation to join the pirates. Bellamy is attributed with making this now-famous speech: 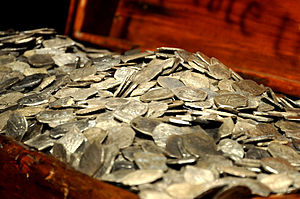 Silver recovered from the wreck of the Whydah. Forbes Magazine ranked Bellamy #1 in its list of "Top-Earning Pirates".[12]

"I am sorry they won't let you have your sloop again, for I scorn to do any one a mischief, when it is not to my advantage; damn the sloop, we must sink her, and she might be of use to you. Though you are a sneaking puppy, and so are all those who will submit to be governed by laws which rich men have made for their own security; for the cowardly whelps have not the courage otherwise to defend what they get by knavery; but damn ye altogether: damn them for a pack of crafty rascals, and you, who serve them, for a parcel of hen-hearted numbskulls. They vilify us, the scoundrels do, when there is only this difference, they rob the poor under the cover of law, forsooth, and we plunder the rich under the protection of our own courage. Had you not better make then one of us, than sneak after these villains for employment?"

[Beer replied that his conscience would not let him break the laws of God and man, and Bellamy continued]

"You are a devilish conscience rascal! I am a free prince, and I have as much authority to make war on the whole world as he who has a hundred sail of ships at sea and an army of 100,000 men in the field; and this my conscience tells me! But there is no arguing with such snivelling puppies, who allow superiors to kick them about deck at pleasure."
— Captain Bellamy, quoted by Captain Charles Johnson (1724), A General History of the Robberies and Murders of the Most Notorious Pyrates 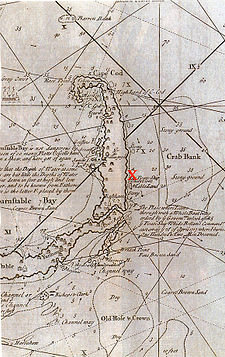 The location of the wrecked Whydah Gally in Cape Cod

Just two months after acquiring the Whydah, as she and the Marianne approached Cape Cod, Williams told Bellamy that he wished to visit his family in Rhode Island, and the two agreed to meet up again near Maine.

If Bellamy intended to revisit his lover Maria Hallett, he failed.[6] The Whydah was swept up in a violent nor'easter storm off Cape Cod at midnight, and was driven onto the sand bar shoals in 16 feet of water some 500 feet from the coast of what is now Wellfleet, Massachusetts. At 15 minutes past midnight, the masts snapped and drew the heavily-loaded ship into 30 feet of water where she capsized and quickly sank, taking Bellamy and all but two of the Whydah's 145-man crew with her.[13]

One hundred and three bodies were known to have washed ashore and were buried by the town coroner, leaving 41 bodies unaccounted for. The Mary Anne was also wrecked that night several miles south of the Whydah, leaving seven more survivors. All nine survivors from the two ships were captured and prosecuted for piracy in Boston, and six were hanged in October 1717 (King George's pardon of all pirates, issued the previous month in September, having arrived in Boston three weeks too late). Two were set free, the court believing their testimony that they had been forced into piracy. The last, a Native American from the Miskito tribe in Central America, John Julian, is believed to have been sold into slavery to John Quincy, the grandfather of U.S. President John Quincy Adams.[14] 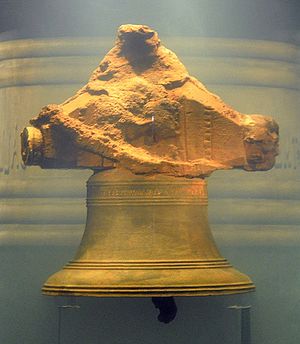 In July 1984, Bellamy became famous again when the discovery of the wreckage of his flagship Whydah was announced, and would soon become the first authenticated pirate shipwreck ever discovered in North America. At the time of its sinking, the Whydah was the largest pirate prize ever captured, and the treasure in its hold amassed roughly 4.5 to 5 tons, including huge quantities of indigo, ivory, gold, and 20,000 to 30,000 pounds sterling, divided into 180 sacks of 50-pound (23 kg) each.[15] The discovery of the wreck was made in 1982 by a diving crew led and funded by underwater explorer Barry Clifford.[16]

In 1985, Clifford recovered the ship's bell upon which were the words "THE WHYDAH GALLY 1716", the first incontrovertible evidence of his find. He subsequently founded The Whydah Pirate Museum on MacMillan Wharf in Provincetown, Massachusetts, dedicated to Samuel Bellamy and the Whydah. It houses many artifacts which were brought from the actual wreck, including a cannon found to be stuffed with precious stones, gold and artifacts. A portion of the some 200,000 artifacts so far recovered are currently on a six-year tour around the United States under the sponsorship of The National Geographic Society.