SanDisk Corporation is a company that designs, develops and manufactures flash memory storage devices and software. SanDisk is the third-largest manufacturer of flash memory in the world.[2] In October 2015, Western Digital agreed to buy SanDisk Corp in a $19 billion deal.[3] 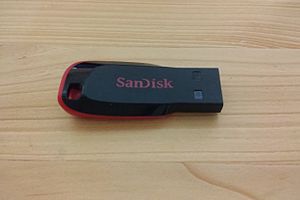 SanDisk has manufactured storage products used in data centers and embedded in smartphones, tablets and PCs. SanDisk’s consumer products are available at 300,000 retail stores in more than 100 countries.[4]

The Fortune 500 and S&P 500 company is headquartered in Silicon Valley and has offices, design centers, test and assembly plants and NAND flash memory fabs located around the world. The company has manufacturing facilities in China, Japan and Malaysia. SanDisk has sales, operations, research and development, and administration in the United States, China, France, Germany, India, Ireland, Israel, Japan, South Korea, Russia, Scotland, Singapore, Spain, Sweden, Taiwan, and the United Arab Emirates. More than half the company’s sales are outside the United States.[5]

The company has more than 8,600 employees worldwide.

SanDisk is publicly traded on NASDAQ. As of June 2015, its market capitalization was over US$13.3 billion.

SanDisk holds more than 5,000 patents worldwide. The company’s patent portfolio is consistently recognized as one of the strongest in the technology industry.[14]

Multi-Level Cell stores two bits of data in each flash memory cell to double the “density” of each memory chip. SanDisk pioneered MLC technology to increase capacity and dramatically reduce costs. Both MLC and System Flash were universally adopted by the flash memory industry in 2000.[citation needed]

SanDisk’s 3D NAND technology development remains on track to begin pilot production in the second half of 2015 with volume production targeted in 2016.[20] 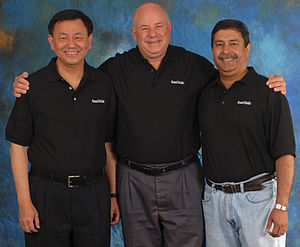 SanDisk co-founder Dr. Eli Harari developed the Floating Gate EEPROM which proved the practicality, reliability and endurance of semiconductor-based data storage. This pioneering work laid the foundation for the flash memory market that significantly impacted the consumer electronics industry, enabling new products across multiple categories. Early on, SanDisk (then known as SunDisk) recognized that digital cameras would need removable flash memory storage, and computers could become ever more mobile and light and would require a similar storage technology.[28]

Dr. Harari offered the removable flash memory card technology to Kodak for inclusion in their cameras in 1988. Kodak offered to fund the development on condition that SanDisk offer a three-year exclusive contract for the “digital film” under the Kodak brand. Dr. Harari rejected the offer because he wanted competition in the marketplace to encourage growth of the flash memory industry and the opportunity to build the SanDisk brand. Today, SanDisk is a global brand and its products are sold in more than 100 countries around the world.

Other products and technologies