One of the 30 dams planned on river Narmada, Sardar Sarovar Dam (SSD) is the largest structure to be built. Following a number of controversial cases before the Supreme Court of India (1999, 2000, 2003), by 2014 the Narmada Control Authority had approved a series of changes in the final height – and the associated displacement caused by the increased reservoir, from the original 80 m (260 ft) to a final 163 m (535 ft) from foundation.[2][3] The project will irrigate more than 18,000 km2 (6,900 sq mi), most of it in drought prone areas of Kutch and Saurashtra.

The dam's main power plant houses six 200 MW Francis pump-turbines to generate electricity and include a pumped-storage capability. Additionally, a power plant on the intake for the main canal contains five 50 MW Kaplan turbine-generators. The total installed capacity of the power facilities is 1,450 MW. Its final configuration is the second largest concrete gravity dam (by volume) after Grand Coulee Dam in the US and has the world's third largest spillway discharging capacity.[4]

In 2011, the government of Gujarat announced plans to generate solar power by placing solar panels over the canal, making it beneficial for the surrounding villages to get power and also help to reduce the evaporation of water. The first phase consists of placing panels along a 25 km length of canal, with capacity for up to 25 MW of power.[6]

The benefits of the dam as listed in the Judgement of the Supreme Court of India in 2000 were:

"The argument in favour of the Sardar Sarovar Project is that the benefits are so large that they substantially outweigh the costs of the immediate human and environmental disruption. Without the dam, the long term costs for people would be much greater and lack of an income source for future generations would put increasing pressure on the environment. If the water of the Narmada river continues to flow to the sea unused, there appears to be no alternative to escalating human deprivation, particularly in the dry areas of Gujarat.

The project has the potential to feed as many as 20 million people, provide domestic and industrial water for about 30 million, employ about 1 million, and provide valuable peak electric power in an area with high unmet power demand (farm pumps often get only a few hours of power per day).It will also provide flood protection to riverine reaches measuring 30,000 ha. covering 210 villages and Bharuch city and a population of 4.0 lac in Gujarat. In addition, recent research shows substantial economic multiplier effects (investment and employment triggered by development) from irrigation development. Set against the future of about 70,000 project affected people, even without the multiplier effect, the ratio of beneficiaries to affected persons is well over 100:1."[7]

The dam is one of India's most controversial and its environmental impact and net costs and benefits are widely debated.[citation needed] The World Bank was initially funding SSD, but withdrew in 1994. The Narmada Dam has been the centre of controversy and protest since the late 1980s.[8]

One such protest takes centre stage in the Spanner Films documentary Drowned Out (2002), which follows one tribal family who decide to stay at home and drown rather than make way for the Narmada Dam.[9] An earlier documentary film is called A Narmada Diary (1995) by Anand Patwardhan and Simantini Dhuru. The efforts of NBA to seek "social and environmental justice" for those most directly affected by the Sardar Sarover Dam construction feature prominently in this film. It received the (Filmfare Award for Best Documentary-1996).[10]

The figurehead of much of the protest is Medha Patkar, the leader of the Narmada Bachao Andolan ("Save Narmada Movement").[11] The movement was cemented in 1989, and received the Right Livelihood Award in 1991.[12]

Support for the protests also came from Indian author Arundhati Roy, who wrote "The Greater Common Good", an essay reprinted in her book The Cost of Living, in protest of the Narmada Dam Project.[13] In the essay, Roy states:

Big Dams are to a Nation's 'Development' what Nuclear Bombs are to its Military Arsenal. They are both weapons of mass destruction. They're both weapons Governments use to control their own people. Both Twentieth Century emblems that mark a point in time when human intelligence has outstripped its own instinct for survival. They're both malignant indications of civilisation turning upon itself. They represent the severing of the link, not just the link—the understanding—between human beings and the planet they live on. They scramble the intelligence that connects eggs to hens, milk to cows, food to forests, water to rivers, air to life and the earth to human existence. 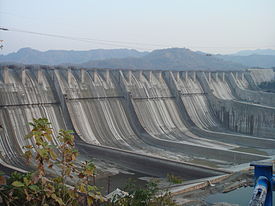 Report of the Ministry of Environment and Forests (MoEF)

The Second Interim Report of the Experts' Committee set up by the Ministry of Environment and Forests (MoEF) of the Government of India to assess the planning and implementation of environmental safeguards with respect to the Sardar Sarovar (SSP) and Indira Sagar projects (ISP) on the Narmada River. The report covers the status of compliances on catchment area treatment (CAT), flora and fauna and carrying capacity upstream, command area development (CAD), compensatory afforestation and human health aspects in project impact areas. Construction, on the other hand, has been proceeding apace: the ISP is complete and the SSP nearing completion. The report recommends that no further reservoir-filling be done at either SSP or ISP; that no further work be done on canal construction; and that even irrigation from the existing network be stopped forthwith until failures of compliance on the various environmental parameters have been fully remedied.[16]

Despite popular protest, the Supreme Court gave clearance for the height to be increased to 121.92 m (400 ft), but in the same judgment Justice Mr. Bharucha gave directions to Madhya Pradesh and Maharashtra (the Grievance Redressal Authorities of Gujarat) that before further construction begins, they should certify (after inspection) that all those displaced by the raise in height of 5 metres have already been satisfactorily rehabilitated, and also that suitable vacant land for rehabilitating them is already in the possession of the respective States. This process shall be repeated for every successive five metre increase in height.