From Infogalactic: the planetary knowledge core
Jump to: navigation, search
Not to be confused with East Frisian Low Saxon.

Old East Frisian and its decline

Old East Frisian used to be spoken in East Frisia (Ostfriesland), the region between the Dutch river Lauwers and the German river Weser. The area also included two small districts on the east bank of the Weser, the lands of Wursten and Würden. The Old East Frisian language could be divided into two dialect groups: Weser Frisian to the east, and Ems Frisian to the west. From 1500 onwards, Old East Frisian slowly had to give way in the face of the severe pressure put on it by the surrounding Low German dialects, and nowadays it is all but extinct.

By the middle of the seventeenth century, Ems Frisian had almost completely died out. Weser Frisian, for the most part, did not last much longer, and held on only until 1700, although there are records of it still being spoken in the land of Wursten, to the east of the river Weser, in 1723. It held out the longest on the island of Wangerooge, where the very last Weser Frisian speaker died in 1953. Today, the Old East Frisian language is no longer spoken within the historical borders of East Frisia; however, a large number of the inhabitants of that region still consider themselves Frisians, referring to their dialect of Low German as Freesk. In this dialect, referred to in German as Ostfriesisch, the Frisian substratum is still evident, despite heavy Germanisation.

The last remaining living remnant of Old East Frisian is an Ems Frisian dialect called Sater Frisian or Saterlandic (its native name being Seeltersk), which is spoken in the Saterland area in the former State of Oldenburg, to the south of East Frisia proper. Saterland (Seelterlound in the local language), which is believed to have been colonised by Frisians from East Frisia in the eleventh century, was for a long time surrounded by impassable moors. This, together with the fact that Sater Frisian always had a status superior to Low German among the inhabitants of the area, accounts for the preservation of the language throughout the centuries.

Another important factor might be that after the Thirty Years' War, Saterland became part of the bishopric of Münster. As a consequence, it was brought back to the Catholic Church, resulting in isolation from the principal Protestant part of East-Frisia since about 1630, so marriages were no longer contracted with people from the north. 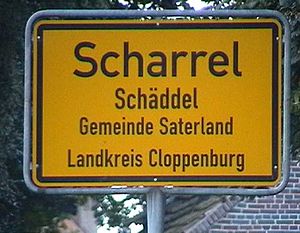 A bilingual sign, with the second line showing the place name in Saterland Frisian

Today, estimates of the number of speakers vary slightly. Saterland Frisian is spoken by approximately 2,250 people, out of a total population of the Saterland area of some 10,000. An estimated 2,000 people speak the language well, of which slightly less than a half are native speakers.[4] The vast majority of native speakers belong to the older generation; Saterland Frisian is thus a seriously endangered language. It might, however, no longer be moribund, as several reports suggest that the number of speakers is rising among the younger generation, some of whom raise their children in Saterlandic.

There are three fully mutually intelligible dialects, corresponding to the three main villages of the municipality of Saterland: Ramsloh (Saterlandic: Roomelse), Scharrel (Schäddel), and Strücklingen (Strukelje). The Ramsloh dialect now somewhat enjoys a status as a standard language, since a grammar and a word list were based on it.

The German government has not committed significant resources to the preservation of Sater Frisian. Most of the work to secure the endurance of this language is therefore done by the Seelter Buund ("Saterlandic Alliance"). Along with North Frisian and five other languages, Sater Frisian was included in Part III of the European Charter for Regional or Minority Languages by Germany in 1998. Since about 1800, Sater Frisian has attracted the interest of a growing number of linguists. During the last century, a small literature developed in it. Also the New Testament of the Bible has been translated into Sater Frisian.

The pronunciation of Saterland Frisian is regarded as very conservative in linguistic terms, like the entire East Frisian language group was conservative with regards to Old Frisian.[5] The following tables are based on studies by Marron C. Fort.[6]

The consonant /r/ is often realised as a vowel [ɐ] in the syllable coda.

Plosives: Today, voiced plosives in the syllable coda are usually terminally devoiced. Especially older speakers though may use voiced codae.