The Saturn IB (pronounced "one B", also known as the Uprated Saturn I) was an American launch vehicle commissioned by the National Aeronautics and Space Administration (NASA) for the Apollo program. It replaced the S-IV second stage of the Saturn I with the much more powerful S-IVB, able to launch a partially fueled Apollo Command/Service Module (CSM) or a fully fueled Lunar Module (LM) into low Earth orbit for early flight tests before the larger Saturn V needed for lunar flight was ready.

The Saturn IB launched two unmanned CSM suborbital flights, one unmanned LM orbital flight, and the first manned CSM orbital mission (first planned as Apollo 1, later flown as Apollo 7). It also launched one orbital mission, AS-203, without a payload so the S-IVB would have residual liquid hydrogen fuel. This mission supported the design of the restartable version of the S-IVB used in the Saturn V, by observing the behavior of the liquid hydrogen in weightlessness.

In 1973, the year after the Apollo lunar program ended, three Apollo CSM/Saturn IBs ferried crews to the Skylab space station. In 1975, one last Apollo/Saturn IB launched the Apollo portion of the joint US-USSR Apollo Soyuz Test Project (ASTP). A backup Apollo CSM/Saturn IB was assembled and made ready for a Skylab rescue mission but never flown.

The remaining Saturn IBs in NASA's inventory were scrapped after the ASTP mission as no use could be found for them and all heavy lift needs of the US space program could be serviced by the cheaper and more versatile Titan III family.

NASA defines launch vehicle as the rocket stages and guidance system that launches a spacecraft. A space vehicle is a complete launch stack: the launch vehicle, spacecraft and any shrouds or adapters. 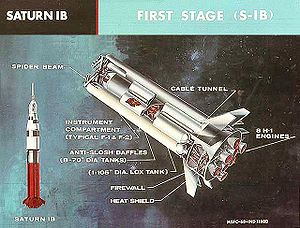 The S-IB stage was built by the Chrysler corporation at the Michoud Assembly Facility, New Orleans.[4] It was powered by eight H-1 rocket engines burning RP-1 fuel with liquid oxygen (LOX). Eight Redstone tanks (four holding fuel and four holding LOX) were clustered around a Jupiter rocket LOX tank. The four outboard engines were mounted on gimbals, allowing them to be steered to control the rocket. Eight fins surrounding the base thrust structure provided aerodynamic stability and control. 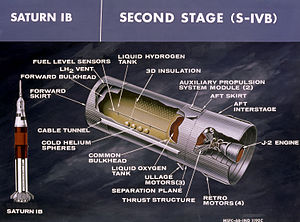 Diagram of the S-IVB second stage of the Saturn IB

The S-IVB was built by the Douglas Aircraft Company at Huntington Beach, California. The S-IVB-200 model was similar to the S-IVB-500 third stage used on the Saturn V, with the exception of the interstage adapter, smaller auxiliary propulsion control modules, and lack of on-orbit engine restart capability. It was powered by a single J-2 engine. The fuel and oxidizer tanks shared a common bulkhead, which saved about ten tons of weight and reduced vehicle length over ten feet. 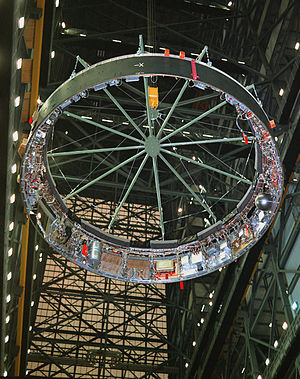 The Instrument Unit which controlled the Saturn IB and Saturn V

IBM built the Instrument Unit at the Space Systems Center in Huntsville, AL. Located at the top of the S-IVB stage, it consisted of a Launch Vehicle Digital Computer (LVDC), an inertial platform, accelerometers, a tracking, telemetry and command system and associated environmental controls. It controlled the entire rocket from just before liftoff until battery depletion. Like other rocket guidance systems, it maintained its state vector (position and velocity estimates) by integrating accelerometer measurements, sent firing and steering commands to the main engines and auxiliary thrusters, and fired the appropriate ordnance and solid rocket motors during staging and payload separation events.

As with other rockets, a completely independent and redundant range safety system could be invoked by ground radio command to terminate thrust and to destroy the vehicle should it malfunction and threaten people or property on the ground. In the Saturn IB and V, the range safety system was permanently disabled by ground command after safely reaching orbit. This was done to ensure that the S-IVB stage would not inadvertently rupture and create a cloud of debris in orbit that could endanger the crew of the Apollo CSM. 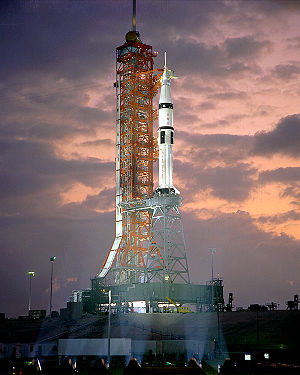 The first five Saturn IB launches for the Apollo program were made from LC-34 and LC-37, Cape Kennedy Air Force Station.

The Saturn IB was used between 1973 and 1975 for three manned Skylab flights, and one Apollo-Soyuz Test Project flight. This final production run did not have alternating black and white S-IB stage tanks, or vertical stripes on the S-IVB aft tank skirt, which were present on the earlier vehicles. Since LC-34 and 37 were inactive by then, these launches utilized Kennedy Space Center's LC-39B.[5] Mobile Launcher Platform No. 1 was modified, adding an elevated platform known as the "milkstool" to accommodate the height differential between the Saturn IB and the much larger Saturn V.[5] This enabled alignment of the Launch Umbillical Tower's access arms to accommodate crew access, fueling, and ground electrical connections for the Apollo spacecraft and S-IVB upper stage. The tower's second stage access arms were modified to service the S-IB first stage.[5]

All Saturn IB launches from AS-201 through ASTP

Currently there are three locations where Saturn IB vehicles (or parts thereof) are on display: