The Apostolic Movement of Schoenstatt (German Schönstatt-Bewegung) is a Roman Catholic Marian Movement founded in Germany in 1914 by Father Joseph Kentenich. Fr. Kentenich saw the movement as being a means of spiritual renewal in the Catholic Church.[1] The movement is named Schoenstatt (which means "beautiful place"), after a small village close to the town of Vallendar near Koblenz in Germany.

The Schoenstatt movement emphasizes a strong devotion to the Blessed Virgin Mary, upholding her as a perfect example of love and purity. It encourages its members to have the faith and purity of children, and to think of Mary as their mother.

The Schoenstatt Apostolic Movement began at Schoenstatt, a junior seminary conducted by the Pallottines for those planning to be missionaries in Africa. It grew out of a Marian sodality established there in April 1914. The superior offered the sodality use of St. Michael's Chapel, near the school. Father Kentenich was the spiritual director at the school. He took inspiration in part from the success of Bartolo Longo in establishing the Marian shrine to Our Lady of the Rosary of Pompei, and believed that he was called to establish a shrine at Schoenstatt.[2]

Kentenich's guidance of the sodality was influenced by the works of St. Louis Grignion de Montfort.[2]

On December 8, 1920, the first women were accepted in the “Apostolic Federation of Schoenstatt". In October 1926, Father Kentenich established the Schoenstatt Sisters of Mary.

In 1941, Father Kentenich was arrested and sent to the Dachau Concentration Camp where he began to expand Schoenstatt there among the prisoners who were Italians, Poles, Czechs, and from other nationalities.[3] 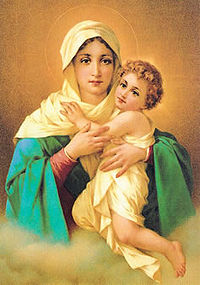 The picture of Mother Thrice Admirable ("Mater ter Admirabilis" in Latin) was donated by a teacher in 1915. It was painted in 1898 by Luigi Crosio for the Swiss printing house, Kunzli Brothers, who produced prints of the image under the title "Refuge of Sinners".[2]

The students re-named the picture "Mother Thrice Admirable", a title used by Father Jakob Rem, SJ, at the Colloquium Marianum in Ingolstadt, in 1604.[4] It has been associated with specific pieces of Roman Catholic Marian art. The spiritual center of the Marian colloquium of 1604 at Ingolstadt was a copy of the icon of Our Lady Salus Populi Romani, and father Rem desired to know which of the invocations from the litany of Loreto would please her most. He reported that after meditation, the title Mother Thrice Admirable was revealed to him.

The 1898 Refugium Peccatorum Madonna by the Italian artist Luigi Crosio was purchased by the Schoenstatt Sisters in Switzerland in 1964 and has since been called the Mother Thrice Admirable Madonna, a key symbol of the Schoenstatt movement.[5]

The Schoenstatt Movement consists of a variety of groups:

The Schoenstatt Movement is today present in approximately 42 countries: Africa (6), Asia (5), Europe (17), North America (5), and South America (9).[1] Groups within the movement include the Pilgrims' Movement, which are apostolic leagues without the obligation to live in community; apostolic federations (or unions), with a non-legal obligatory form of community; and secular institutes. Schoenstatt places a great emphasis on the family, and youth especially are an important part of the movement. There are hundreds of Schoenstatt youth groups throughout the world.

As of September 2012[update], the Very Reverend Heinrich Walter is the Superior General of the priests of Schönstatt. On Tuesday, September 18, 2012, Walter was appointed by Pope Benedict XVI to serve as one of the papally-appointed, non-episcopal, religious-Order member Synod Fathers for the October 2012 13th Ordinary General Assembly of the Synod of Bishops on the New Evangelization.[7]

According to Father Joseph Kentenich:

[Schoenstatt] wishes to be understood as a universal vision, comprising time and eternity, this world and the next, the economic, social, ethical, political and religious needs of all people, including the dispossessed, the millions of masses… It wants to help redeem the world not only from its earthly sufferings, but also from sin and from its alienation from God. It tries to do this under the guidance and in the school of Our Lady by applying the original principles of Christianity in a new way to restore the disturbed relationship between the individual person and society, the person and business, the person and technology, and the person and social advancement.

Central issues are the ideas based on that which Josef Kentenich founded the movement in 1914, including Christian personality development, orientation after ideals, and community.

A central point in the movement dynamics and faith is the devotion to the Shrine, based on the first shrine in Schoenstatt where the movement started with a special devotion to Mary and of which there are over 200 replicas of around the world.

The movement is involved in several apostolic actions, including missionary work, charity, education and other projects.

In the summer of 2005 about four thousand young people from all around the world; Germany, Poland, England, Italy, Uruguay, Argentine, Chile, Mexico, Puerto Rico, Costa Rica, Africa, United States, etc. gathered for almost a week around the Original Shrine in Schönstatt, Vallendar for the Schönstatt Youth Festival prior to the WJT (World Youth Day) in Cologne. This event ignited the youth around the world, bringing renewal and energy to continue in the mission set by the Blessed Mother to each and every one there.

After the success of the Youth Festival the prior year, it became obvious that there should be something to bring together each year the youth of the world, around the Original Shrine. During the Summer of 2006 Volunteers from Germany, Mexico, United States, Poland, Puerto Rico, Chile, Argentina, Portugal and Kenya, worked together to create a month-long program for young pilgrims from all over the world. This being the first of many Schoenstatt Summers. The Night of the Shrine was the conclusion of this month-long program. At midnight on August 27, over 400 people gathered for Holy Mass around the Original Shrine. Together with them, the youth of the world in more than 90 Shrines spread around the 5 continents, celebrated at the same moment, exactly the same Holy Mass. Each Shrine celebrating also in their own special way according to the traditions of each country. This becoming the first World Youth Mass.