From Infogalactic: the planetary knowledge core
(Redirected from Schuman declaration)
Jump to: navigation, search
File:Schuman Declaration.ogg
An excerpt from the speech.

'The Schuman Declaration' on 9 May 1950, inspired and for the most part drafted by Jean Monnet, Schuman proposed to place Franco-German production of coal and steel under one common High Authority. This organization would be open to participation to other European countries. This cooperation was to be designed in such a way as to create common interests between European countries which would lead to gradual political integration, a condition for the pacification of relations between them: “Europe will not be made all at once, or according to a single plan. It will be built through concrete achievements which first create a de facto solidarity. The coming together of the nations of Europe requires the elimination of the age-old opposition of France and Germany”. His speech did not fall on deaf ears, as German Chancellor Adenauer responded swiftly with a positive reply as did the governments of the Netherlands, Belgium, Italy and Luxembourg. Within one year, on 18 April 1951, the six founding members signed the Treaty of Paris. It created the European Coal and Steel Community - Europe’s first supranational Community. This ground-breaking organization paved the way for the European Economic Community and subsequently the European Union, which is still run by the innovative type of European institutions conceived in 1950. However, his efforts did not stop there. He became a great proponent of further integration through a European Defence Community and in 1958 he became the first President of the predecessor to the current European Parliament. When he left office the Parliament bestowed on him the title of ‘Father of Europe’. Because of the significance of his ‘Schuman Declaration’ on 9 May 1950, this day has been designated as ‘Europe Day’. And, in honour of his pioneering work towards a united Europe, the district housing the headquarters of several European Union institutions in Brussels is named after him. 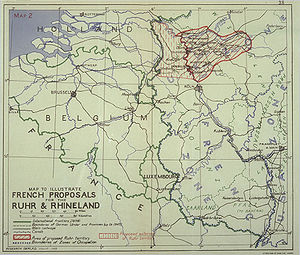 Map showing details of the 1946 French proposal for the detachment of the Ruhr area and parts of the Rhineland from Germany.

Europe had just come out of World War II, a conflict that had nearly destroyed the continent and split it between two spheres of influence. With the desire not to repeat such destruction, there was a strong momentum towards European co-operation. Winston Churchill, standing next to Robert Schuman, had called for Franco-German reconciliation in a united Europe in a speech in Metz on 14 July 1946. In Zurich, Churchill later called for a "United States of Europe" and, in the meantime, the formation of a "Council of Europe".[1]

Anxious to see greater European economic integration in order to be able to form a block against the Soviet Union, the U.S. used the Marshall Plan to force the adoption of more open markets as a pre-requisite to receive aid. The Organisation for European Economic Co-operation was founded in 1948 to help coordinate the Marshall Plan. Its guiding principles were:[2]

Under the Monnet Plan of 1946–1950, designed to increase French steel production at the expense of Germany, France had absorbed the Saarland, a center for coal mining, from Germany and turned it into a protectorate. French attempts to detach the industrial region of the Ruhr with its many steel plants and coal mines from Germany met with greater resistance. However, in 1949 the International Authority for the Ruhr was founded. It was an international body that set limits on the production and production capacity in the Ruhr, and controlled distribution of the production, i.e. export or domestic. The organisation was dissolved with the introduction of the common market and the European Coal and Steel Community.

In speeches before the United Nations, Schuman announced that a revitalized Germany must be placed inside a European democracy.[3] The Council of Europe was duly created to provide the great framework of a European union (as it was originally called) in which the European Communities could be inserted. The Council was a herald of these supranational communities to come on the path to a full European integration.

Schuman had stated that the idea of a European Coal and Steel Community dated from before he attended university. Schuman initiated policies in preparation for this major change of European politics while Prime Minister of France (1947–48) and Foreign Minister from 1948 onwards. He spoke about the principles of sharing European resources in a supranational union at the signing of the Statute of the Council of Europe in London, 5 May 1949.

The Declaration had several distinct aims, which it tackled together:

According to Professor Dr. Hans Ritschl, Schuman made a speech arguing that the Schuman Plan was really a continuation of the Monnet Plan, and that it was solely for the sake of supporting French steel exports that they had taken on that task.[5] Professor Dr. Hans Ritschl says this speech was never intended to reach German ears.[6] However, Prof Ritschl cites no sources and the characteristics, objectives and method of the Schuman Plan and the Monnet Plan are quite different as noted above. 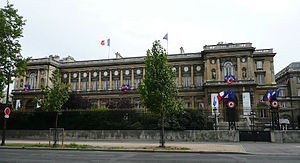 The speech was made at Quai d'Orsay, home of the French Foreign Ministry

The Declaration itself was first drafted by Paul Reuter, Schuman's colleague and the lawyer at the Foreign ministry. It was edited by Jean Monnet and others including Schuman's Directeur de Cabinet, Bernard Clappier. The draft documents of the Declaration have been published by the Jean Monnet Foundation.[7] They show that Reuter pencilled the first draft and Monnet made only minor corrections. Monnet crossed out the word "supranational" — the key concept used by Schuman to describe the new form of European superstate — and replaced it with the ambiguous word "federation". All the key elements—a new organisation of Europe, the supranational innovations, the European Community, the High Authority, fusion of vital interests such as coal and steel, and a single European market and economy — were floated in a series of major speeches given by Schuman in the previous, preparatory years. They include his speeches at the United Nations, at St James's Palace, London at the signing of the Statutes of the Council of Europe and in Brussels, Strasbourg and in North America. The Proposal for a supranational Community was made to the European peoples in the dismal, fearful years of the Cold War as it ruled out another war with Germany. The proposals became a Declaration of French government policy when after two Cabinet discussions it was agreed on 9 May 1950 that France would abide by such a Community establishing European rule.

In his introductory remarks, Schuman revealed that this seemingly technical, social and industrial innovation would have huge political repercussions, not only for European democracy but for bringing democratic liberty to other areas such as Soviet-controlled Eastern Europe, to aid the developing countries and for establishing world peace. 'Europe will be born of this, a Europe which is solidly united and constructed around a strong framework,' he said. The declaration's immediate goal was for France, Italy, West Germany, and the Benelux countries to share strategic resources in order to 'make war not only unthinkable but materially impossible' . The immediate outcome of this initiative was the 18 April 1951 creation of the European Coal and Steel Community (ECSC), first of the three European Communities and a predecessor of the European Union. At the signing of the Treaty of Paris on 18 April 1951, the six signatory states affirmed in a separate document that this date represented Europe's birth: "By the signature of this Treaty, the participating Parties give proof of their determination to create the first supranational institution and that thus they are laying the true foundation of an organised Europe. This Europe remains open to all countries that are free to choose. We profoundly hope that other countries will join us in our common endeavour."

The Schuman Declaration marked the beginning of post-World War II Franco-German cooperation and the re-integration of West Germany into Western Europe. Konrad Adenauer, Chancellor of West Germany, said of the declaration, "That's our breakthrough."[8] The ECSC was created by the Treaty of Paris and, on 18 April 1951, the leaders of the six member countries (including Schuman) signed the Europe Declaration stating that "marked the true foundation of Europe." The supranational Community as the fruit of the Declaration provided five still-developing European institutions: the European Commission, the European Parliament, the Consultative Committees (representing organised civil society), the Council of Ministers and the European Court of Justice.[9]

The resulting ECSC introduced a common steel and coal market across the member countries with freely set market prices, and without internal import/export duties or subsidies. The success of ECSC led to further steps, foreseen by Schuman, being taken with the creation of the European Economic Community and the European Atomic Energy Community. The two European Commissions of the latter Rome Treaties and the High Authority merged into a single European Commission in the 1960s. Further intergovernmental, (non-supranational), bodies and areas of activities were created leading to the creation of the European Union in 1993.

The Declaration is viewed as one of the main founding events of the EU. In 1985, during Jacques Delors's tenure as President of the European Commission, the leaders of the European Council met in Milan to decide upon 'national' symbols for the Community. They adopted those chosen by the Council of Europe previously but they changed the date of Europe Day from 5 May to 9 May, in commemoration of the Schuman Declaration. The day is now also known as Schuman Day.