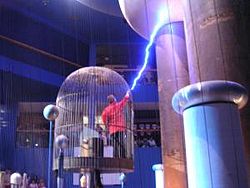 Demonstration of artificial lightning (in the Museum of Science, Boston)

A science museum is a museum devoted primarily to science. Older science museums tended to concentrate on static displays of objects related to natural history, paleontology, geology, industry and industrial machinery, etc. Modern trends in museology have broadened the range of subject matter and introduced many interactive exhibits. Many if not most modern science museums — which increasingly refer to themselves as "science centers" or "discovery centers" — also emphasize technology, and are therefore also technology museums.

The mission statements of science centers and modern museums vary, but they are united in being places that make science accessible and encourage the excitement of discovery. They are an integral and dynamic part of the learning environment, promoting exploration from the first "Eureka!" moment to today's cutting-edge research. However, the negative impacts of science and technology, or the uneven development of its various disciplines, may or may not be explored by some organizations.

...The public museum as understood today is a collection of specimens and other objects of interest to the scholar, the man of science as well as the more casual visitor, arranged and displayed in accordance with the scientific method. In its original sense, the term 'museum' meant a spot dedicated to the muses - 'a place where man's mind could attain a mood of aloofness above everyday affairs'.

As early as the Renaissance, many aristocrats collected curiosities for display to their family. Universities and particularly medical schools also maintained study collections of specimens for their students. Scientists and collectors displayed their finds in private cabinets of curiosities. Such collections were the predecessors of modern natural history museums. The Utrecht University Museum, among others, still displays an extensive collection of 18th-century animal and human "rarities" in its original setting.

The first dedicated science museum was the Museo de Ciencias Naturales, in Madrid, Spain. Opened in 1752, it almost disappeared during the Franco regime, but it recovered afterwards and today works closely with the CSIC.[1]

Another line in the genealogy of science museums came during the Industrial Revolution, with great national exhibits intended to showcase the triumphs of both science and industry. For example, the Great Exhibition in The Crystal Palace (1851) eventually gave rise to London's Science Museum.

In America, various Natural History Societies established collections in the early 19th century, which evolved into museums. Notable was the early New England Museum of Natural History, (now the Museum of Science) which opened in Boston in 1864. The Academy of Science of Saint Louis was founded in 1856 as the first scientific organization west of the Mississippi (although the organization managed scientific collections for several decades a formal museum was not created until the mid-20th century).

The modern interactive science museum appears to have been pioneered by Munich’s Deutsches Museum in the early 20th century. This museum had moving exhibits where visitors were encouraged to push buttons and work levers. The concept was taken to the US by Julius Rosenwald, chairman of Sears, Roebuck and Company, who visited the Deutsches Museum with his young son in 1911. He was so-captivated by the experience that he decided to build a similar museum in his home town. Chicago's Museum of Science and Industry opened in phases between 1933 and 1940.

In 1959 the Museum of Science and Natural History (now the Saint Louis Science Center) was formally created by the Academy of Science of Saint Louis, featuring many interactive science and history exhibits.

In August 1969, Frank Oppenheimer dedicated his new Exploratorium in San Francisco almost completely to interactive science exhibits. The Exploratorium published the details of their own exhibits in "Cookbooks" that served as an inspiration to many other museums around the world.

Opened in September 1969, the Ontario Science Centre continued the trend of featuring interactive exhibits rather than static displays.

In 1973, the first Omnimax theater opened as the Reuben H. Fleet Space Theater and Science Center in San Diego's Balboa Park. The tilted-dome Space Theater doubled as a planetarium. The Science Center was an Exploratorium-style museum included as a small part of the complex. This combination interactive science museum, planetarium and Omnimax theater pioneered a configuration that many major science museums follow today.

Also in 1973, the Association of Science-Technology Centers (ASTC) was founded as an international organization to provide a collective voice, professional support, and programming opportunities for science centers, museums, and related institutions.

As the flavor of interactivity spread worldwide, the massive Cite des Sciences et de l'Industrie opened in Paris in 1986, and smaller but no less influential national centers soon followed in Spain, Finland, and Denmark. In the UK, the first interactive centers also opened in 1986 on a modest scale, but their real blossoming more than a decade later was fuelled by Lottery funding for projects to celebrate the millennium.

Since the 1990s, science museums and centers, such as Thailand's National Science Museum, have been created or greatly expanded in East Asia, South Asia, and other parts of the developing word.

However, in many more institutionalized organizations the improvised, experimental nature of the Oppenheimer era has been diluted in favor of a standardized view of science, often dominated by governmental, corporate, and commercial messages. 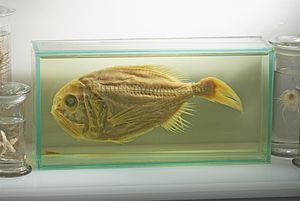 Museum specimen of an endangered fish, the Orange Roughy.