The Scottish diaspora consists of Scottish people who emigrated from Scotland and their descendants. The diaspora is concentrated in countries such as the United States, Canada, Australia, England, New Zealand, Northern Ireland and to a lesser extent Argentina, Chile and Brazil.

Scottish people have a long history in Canada, dating back several centuries. Many towns, rivers and mountains have been named in honour of Scottish explorers and traders such as Mackenzie Bay and Calgary is named after a Scottish beach. Most notably, the Atlantic province of Nova Scotia is Latin for New Scotland. Once Scots formed the vanguard of the movement of Europeans across the continent. In more modern times, emigrants from Scotland have played a leading role in the social, political and economic history of Canada, being prominent in banking, labour unions, and politics.[20]

The first documented Scottish settlement in the Americas was of Nova Scotia (New Scotland) in 1629. On 29 September 1621, the charter for the foundation of a colony was granted by James VI of Scotland to Sir William Alexander.[21] Between 1622 and 1628, Sir William launched four attempts to send colonists to Nova Scotia; all failed for various reasons. A successful occupation of Nova Scotia was finally achieved in 1629. The colony's charter, in law, made Nova Scotia (defined as all land between Newfoundland and New England) a part of mainland Scotland; this was later used to get around the English navigation acts. The Scots have influenced the cultural mix of Nova Scotia for centuries and constitute the largest ethnic group in the province, at 29.3% of its population.

As the third-largest ethnic group in Canada and amongst the first Europeans to settle in the country, Scottish people have made a large impact on Canadian culture since colonial times. According to the 2011 Census of Canada, the number of Canadians claiming full or partial Scottish descent is 4,714,970,[22] or 15.10% of the nation's total population.

A large proportion of Scottish Chileans are sheep farmers in the Magallanes region of the far south of the country, and the city of Punta Arenas has a large Scottish foundation dating back to the 18th century. A famous Scot, Thomas, Lord Cochrane (later 10th Earl of Dundonald) formed the Chilean Navy to help liberate Chile from Spain in the independence period. Chile developed a strong diplomatic relationship with Great Britain and invited more British settlers to the country in the 19th century.

The Chilean government land deals invited settlement from Scotland and Wales in its southern provinces in the 1840s and 1850s. The number of Scottish Chileans is still higher in Patagonia and Magallanes regions. The Mackay School, in Viña del Mar is an example of a school set up by Scottish Chileans. The Scottish and other British Chileans are primarily found in higher education as well in economic management and the country's cultural life.

The table shows the ethnic Scottish population in the United States from 1700 to 2013. In 1700 the total population of the American colonies was 250,888 of which 223,071 (89%) were white and 3.0% were ethnically Scottish.[40][41] In the 2000 census, 4.8 million Americans self-reported Scottish ancestry, 1.7% of the total US population. Another 4.3 million self-reported Scotch-Irish ancestry, for a total of 9.2 million Americans self-reporting some kind of Scottish descent.

Self-reported numbers are regarded by demographers as massive under-counts, because Scottish ancestry is known to be disproportionately under-reported among the majority of mixed ancestry,[42] and because areas where people reported "American" ancestry were the places where, historically, Scottish and Scotch-Irish Protestants settled in America (that is: along the North American coast, Appalachia, and the Southeastern United States). Scottish Americans descended from nineteenth-century Scottish immigrants tend to be concentrated in the West, while others in New England are the descendants of immigrants from the Maritime Provinces of Canada, especially in the 1920s.

A steady rate of Scottish immigration continued into the 20th century, with substantial numbers of Scots continued to arrive after 1945.[52] From 1900 until the 1950s, Scots favoured New South Wales, as well as Western Australia and Southern Australia.[citation needed] A strong cultural Scottish presence is evident in the Highland games, dance, Tartan day celebrations, Clan and Gaelic speaking societies found throughout modern Australia.

According to the 2011 Australian census 130,204 Australian residents were born in Scotland,[53] while 1,792,600 claimed Scottish ancestry, either alone or in combination with another ancestry.[6] This is the fourth most commonly nominated ancestry and represents over 8.9% of the total population of Australia. 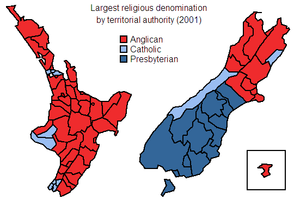 The settlement of English in the North Island and northern South Island and Scottish in the Deep South is reflected in the dominance of Anglicanism and Presbyterianism in the respective regions.
Main article: Scottish New Zealander

Scottish migration to New Zealand dates back to the earliest period of European colonisation, with a large proportion of Pākehā New Zealanders being of Scottish descent.[54] However, identification as "British" or "European" New Zealanders can sometimes obscure their origin. Many Scottish New Zealanders also have Māori or other non-European ancestry.

The majority of Scottish immigrants settled in the South Island. All over New Zealand, the Scots developed different means to bridge the old homeland and the new. Many Caledonian societies were formed, well over 100 by the early twentieth century, who helped maintain Scottish culture and traditions. From the 1860s, these societies organised annual Caledonian Games throughout New Zealand. The Games were sports meets that brought together Scottish settlers and the wider New Zealand public. In so doing, the Games gave Scots a path to cultural integration as Scottish New Zealanders.[55]

The Lay Association of the Free Church of Scotland founded Dunedin at the head of Otago Harbour in 1848 as the principal town of its Scottish settlement. The name comes from Dùn Èideann, the Scottish Gaelic name for Edinburgh, the Scottish capital.[56] Charles Kettle the city's surveyor, instructed to emulate the characteristics of Edinburgh, produced a striking, 'Romantic' design.[57] The result was both grand and quirky streets as the builders struggled and sometimes failed to construct his bold vision across the challenging landscape. Captain William Cargill, a veteran of the war against Napoleon, was the secular leader. The Reverend Thomas Burns, a nephew of the poet Robert Burns, was the spiritual guide.